Queensland’s lockdown will continue in Brisbane and Moreton Bay LGAs after Friday despite the state working to gain control over five unrelated Covid incidents.

Restrictions including wearing of masks will continue to apply for the next two weeks.

‘One is the partner of the woman who worked at the Qatar airline counter identifed yesterday.

Two news cases are  a mother and daughter who live in a household.

On Sunday June 26 they were at the Harris Farm markets at West End between 11.50 am until 1.50pm. They visited the Woolworths at the same complex five minutes later.

On Monday June 28 and Tuesday June 29 they were at the Greek Orthodox Community Centre and  from 7.20am-7.30am, the Expresso Engine Coffee Shop.

Five community cases have been recorded during the lockdown period so far.

Two of the new cases were reported on Thursday after more than 28,000 tests – an ‘encouraging’ sign the state was getting on top of the virus spreading. 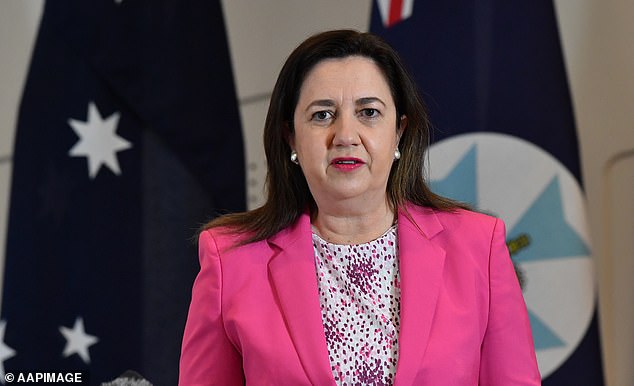 ‘We’ve still got another 24 hours to go … we’ll update you tomorrow in relation to whether or not we can leave that lockdown,’ Premier Annastacia Palaszczuk said on Thursday

The Queensland government had drawn up a number of contingency plans should lockdown need to be extended.

The state is separately managing a cluster linked to a Portuguese club, a Qatar Airways worker believed to be infected at the airport, the case of a miner who returned from the NT and potential contacts of a Virgin crew member onboard several flights while having the virus.

One of them was a hospital receptionist from Brisbane’s Prince Charles Hospital who had spent 10 days in the community while infectious with the Indian Delta variant.

The Premier appeared on the ABC’s Q&A rogram last night to repeat her claim that hotel quarantine was inadequate to contain the Delta variant.

‘I’m telling you we can’t contain this virus,’ she said.

‘It is now the most infectious strain, the Delta variant, it is going to be more and more difficult to contain it when we have something like 3000 people in our hotel quarantine.’

While Chief Health Officer Jeannette Young is confident about each of the state’s Covid outbreaks individually, she said on Thursday that managing all of them simultaneously ‘is a lot’.

Dr Young yesterday defended her advice for under 40s not to get the AstraZeneca vaccine, but wait for Pfizer, due to the extremely low risk of an extraordinarily rare blood clotting disorder.

‘I have put my advice out there very, very clearly. Now, people need to work out where they want to get advice from,’ she said. 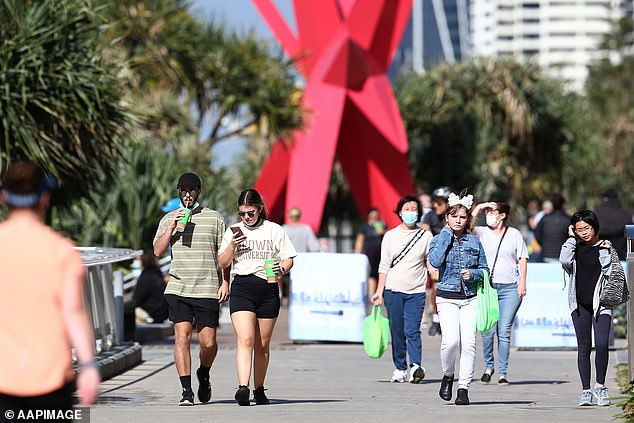 While Chief Health Officer Jeannette Young is confident about each of the state’s Covid outbreaks individually, she said managing all of them simultaneously ‘is a lot’

Also at Thursday’s Covid update, Ms Palaszczuk denied her tweet falsely claiming that the UK government ‘won’t allow’ under 40s to get the AstraZeneca vaccine had been misleading.

She later tweeted a link to a BBC article citing advice in the UK for 18-39-year-olds to be ‘offered an alternative’ to AstraZeneca ‘if available and if it does not cause delays in having the vaccine’. 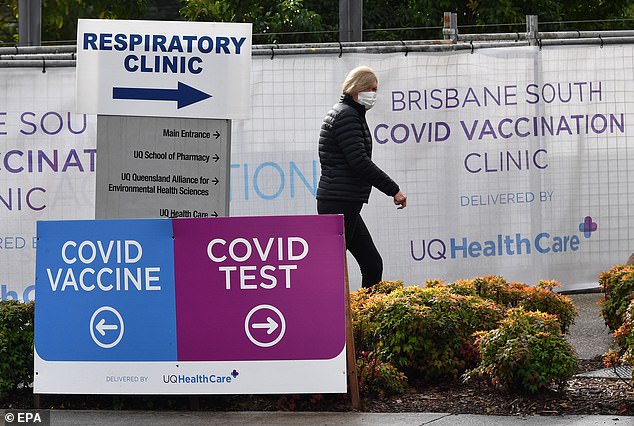 Queenslanders had bee n under a number of Covid restrictions, including  mandatory masks outside the home and in public venues, and only two visitors allowed in homes.

Restaurants, pubs and cafes are limited to takeaway or home delivery only.