An evil slaver convicted of crimes against humanity has walked free again after claiming their will be no one to care for his three autistic children if he remains in jail.

Kandasamy and Kumuthini Kannan face up to 25-years in jail after being found guilty in Melbourne of using and possessing a slave.

But on Wednesday, only Kumuthini was taken into custody after the pair claimed they still had no-one to look after their three autistic children. 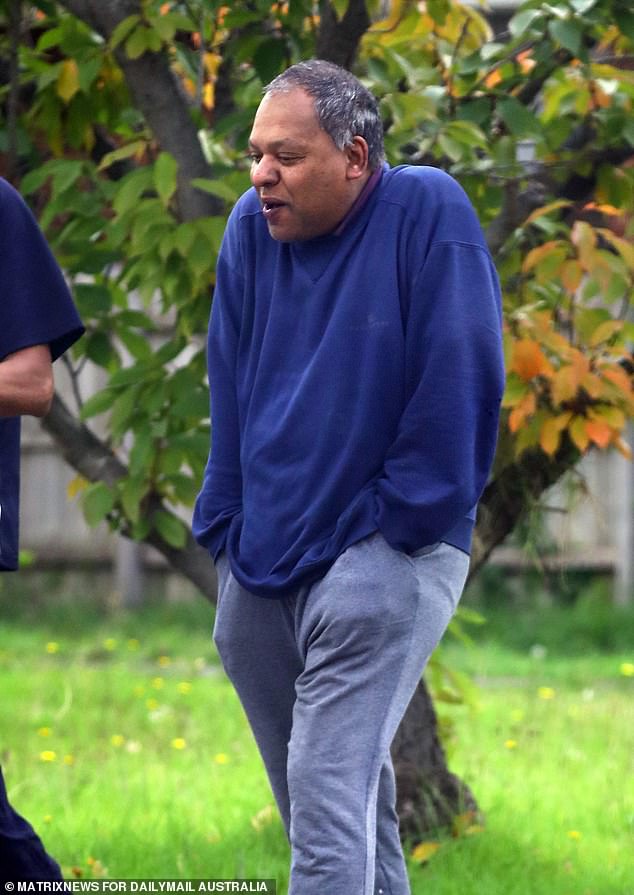 Kumunthini had dominated over her ‘pathetic’ husband Kandasamy (pictured), who enjoyed a walk in the fresh air while awaiting sentence. He now claims he’s autistic 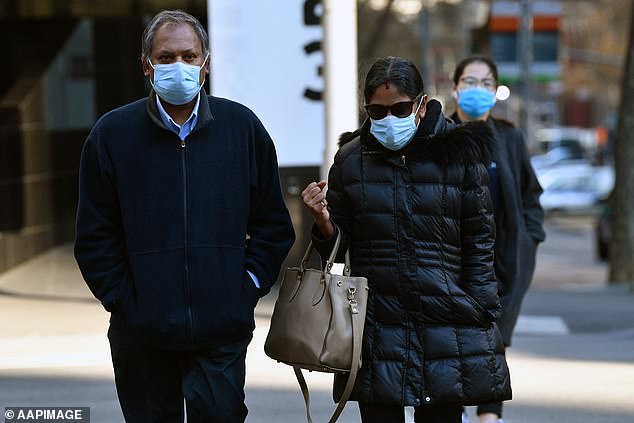 Husband and wife Kandasamy and Kumuthini Kannan attend the Supreme Court of Victoria on Wednesday. The evil slavers face 25 years behind bars for keeping an elderly woman captive 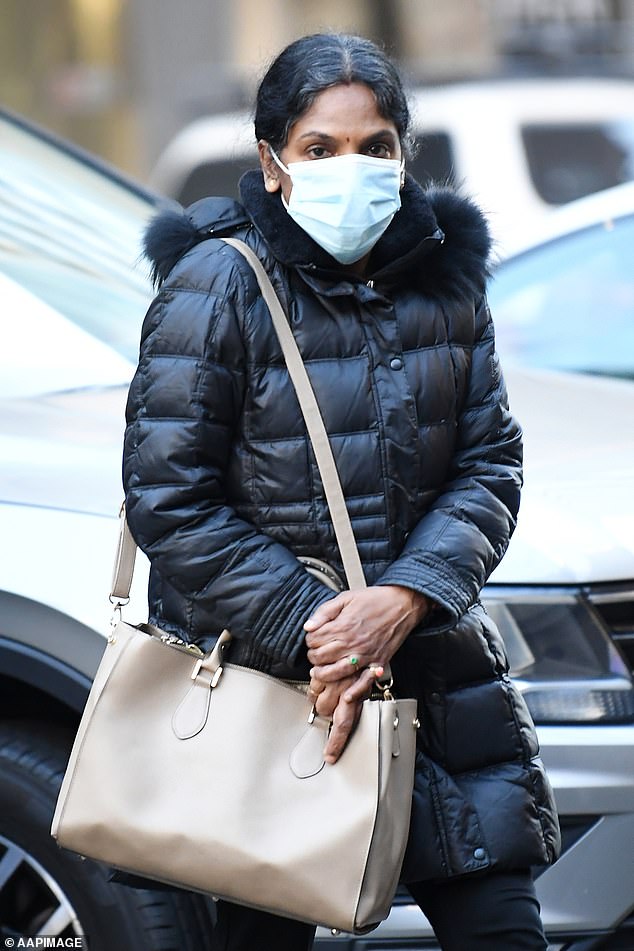 Game over: Wicked slaver Kumuthini Kannan attends the Supreme Court of Victoria in what will be perhaps her last day of freedom for some time

Justice John Champion on releasing the slaver on bail

‘I gotta say it’s unbelievable that we get to this point, which surrounding a date that was well known from the point of which the jurors brought down verdicts in this matter.

‘We get to this point is just stunning to me. That these children – there is no plan in place to care for these three children in the event that your clients go into custody.’

‘It’s not for this court to be bringing people to court to explain all of this, it’s just, I can’t express my displeasure strongly enough that this situation hasn’t been remedied before today.’

‘I am extremely angry that the situation has developed … the court expresses its utter displeasure that we’re in this situation once again.’

Justice Champion said he would release Kandasamy has his barrister had argued earlier he ought not be jailed at all.

‘The same circumstances do not apply to (Kumuthini) so her bail will be revoked,’ he said.

The wicked couple had used the same argument to obtain bail in April upon being found guilty of slavery.

A furious Supreme Court of Victoria Justice John Champion told guards to lock the female slaver up, but release her husband until their sentence on July 21.

Kumuthini had been painted as the evil ringleader of the slaving efforts, who had dominated over her pathetic husband.

On Wednesday, Kandasamy’s barrister John Kelly SC told the Supreme Court of Victoria his remorseless client not only did not accept the jury verdict, but he planned to contest it on appeal.

‘He doesn’t accept the jury’s verdict. No he doesn’t. And we will receive instructions no doubt in due course to explore the Court of Appeal the soundness or otherwise of those two verdicts,’ Mr Kelly told the judge.

In a day of drama, Mr Kelly further claimed his 57-year old client had been diagnosed with mild autism in the months since the jury returned its verdict in April.

The condition, he argued, would make the slaver’s life in jail tougher, which he submitted ought earn him a lighter sentence.

The slaver had also developed a ‘major depressive illness’ that doctors’ claimed was brought on by the verdict itself.

‘The autism, albeit mild, has been of long standing in his case although undiagnosed,’ Mr Kelly said. ‘And it is something in and of itself that renders him vulnerable in jail.’

In a series of gut-churning submissions, Mr Kelly described his client as a man of good character.

‘They are not heartless people. Mr Kannan is not a heartless person,’ he told Justice Champion.

Mr Kelly, whose phone went off midway through his submissions, claimed his client’s case was ‘unique’ and he should receive a softer sentence due to his ‘exceptional circumstances’.

‘The appropriate penalty ultimately for Mr Kannan is one of imprisonment – albeit release on a recognisance release order for a period of up to five years,’ he said.

Such an order effectively amounts to a prison term served out entirely in the community. 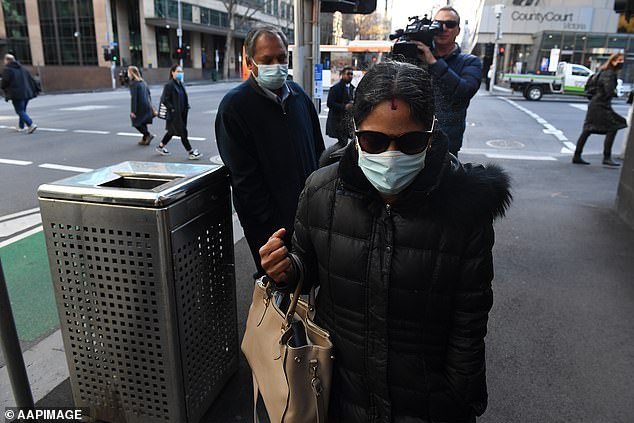 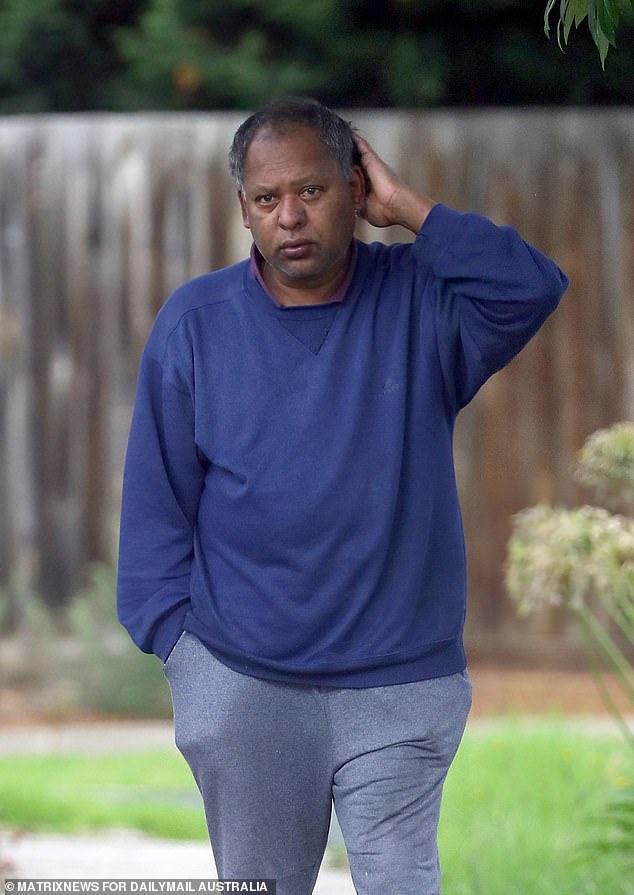 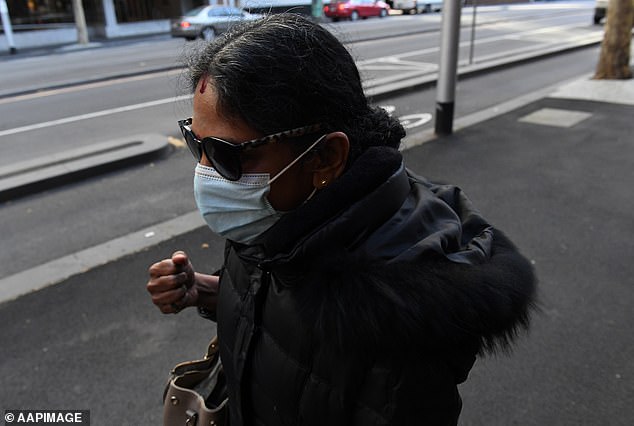 Kumuthini Kannan had been allowed to roam free as a bird after convincing the judge she had no-one to look after her children. She attends court on Wednesday

The court heard the couple again use their autistic children as a vehicle to justify their freedom.

The pair had remained free in the community since their guilty verdicts after convincing the court they needed to get home to their teenage kids.

In April, the court heard the Kannans had been so confident they would walk free they had not even discussed how their children might be cared for should they be immediately taken into custody.

So bold, they had not told the children they had been attending court for the past three months.

The couple brought in forensic psychologist Dr Jeffrey Cummins in support of their bail application, who told Justice Champion the Kannan children needed their parents despite one being aged 18 and the twins aged 16.

On Wednesday, Kandasamy’s barrister continued to use their condition to justify the release of his client.

‘Imprisonment will result in children being left to fend for themselves as best they can without parental supervision or support,’ Mr Kelly said.

‘The fact here is that exceptional circumstances are conceded (by prosecutors) in relation to the two younger children.’

Mr Kelly said while he was not suggesting they would be left without support, the removal of their parents would have a devastating impact on them.

‘It is only in rare, exceptional cases where the court can take into account the impact of a sentence on a third party, but this is such a case and it’s one of a number of reasons that marks this case as unusual or unique,’ he said. 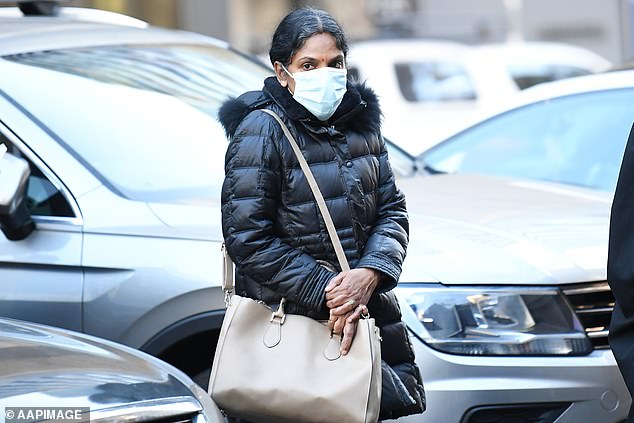 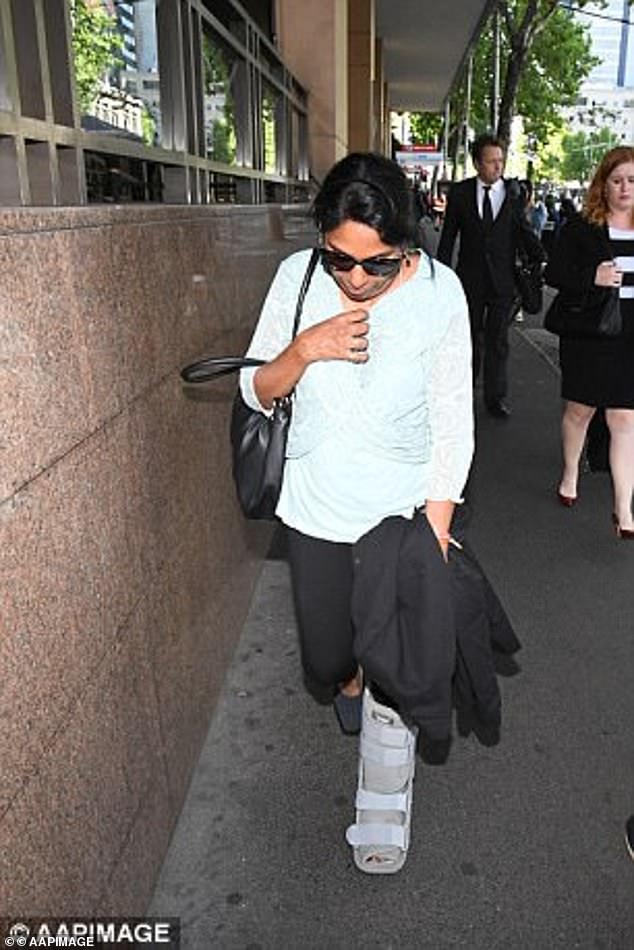 Kumuthini Kannan was found guilty of being a slave driver. She would slash her servant with a knife if she was not satisfied with her work, a jury heard 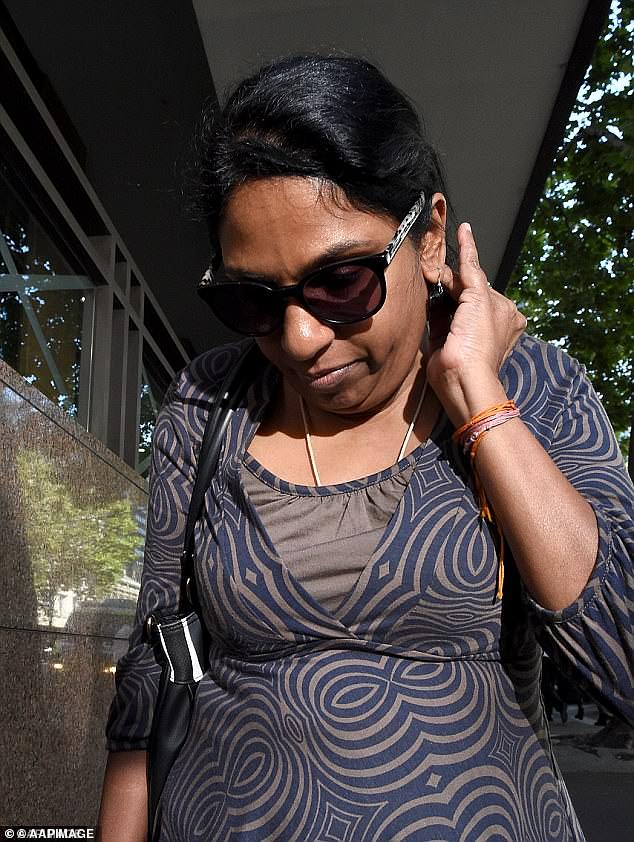 The Case Against The Kannan Slavers

Kandasamy and Kumuthini Kannan  had kept the Indian woman as a slave before she was discovered with no teeth and emaciated with sepsis.

They had claimed she was treated ‘like a king’.

The couple were both charged with intentionally possessing a slave and intentionally exercising the right of ownership over a slave between 2007 and 2015.

The pair claimed they had been framed and became embroiled in an elaborate extortion attempt.

The Supreme Court of Victoria heard the couple had been heard by police discussing the allegations over phone taps.

‘It seems the suggestion is a letter would be produced which would suggest an extortion attempt had been made to extort 10 laks, the equivalent of $18,000 or $19,000 in order to drop the allegations,’  Prosecutor Richard Maidment told jurors.

The court heard their victim had no teeth when found by police in 2015.

When asked why by police, her keeper claimed she had pulled them out herself and ate only mash.

The woman had been enslaved after two previous visits with the family.

The slave was found after she became sick and Kumuthini called her an ambulance.

Paramedics found her shivering in a pool of urine in the bathroom.

During their trial, which went for more than a month earlier this year, Kumunthini had been painted as the evil slave keeper, who dominated over her pathetic husband and their slave.

The arrogant female slaver had smiled broadly just minutes before learning her fate upon verdict in April, still supremely confident the jury had swallowed her lies.

The jury of 12 delivered its verdict after deliberating for just over a day.

Kumunthini’s slave had told police she had beaten her with a frozen chicken, tossed boiling water on her legs, splashed hot tea in her face and poured curries over her head.

But Justice Champion heard he could not take any of that into account when sentencing the couple.

Kumunthini’s barrister, Dr Gideon Boas, submitted on Tuesday his client was not convicted of torturing the woman and that no jury would ever find ‘beyond reasonable doubt’ that any such torture had ever occurred.

Dr Boas, who was scathing of the slave’s evidence throughout the trial, again referred to her evidence as ‘manifestly flawed’.

A remorseless Kumunthini had burst into tears upon hearing the guilty verdicts in April.

She held her head in her hands and slumped her head into her husband’s shoulders as he too was found guilty.

Kumunthini had been a beacon of arrogance throughout the epic trial, often smiling while her elderly victim gave harrowing evidence.

On Tuesday, Crown prosecutor Richard Maidment QC told the court the Kannans had neglected their slave severely in her last three months of captivity.

The elderly woman was found by paramedics in 2015 in a pool of her own urine and weighing just 40kg.

‘In effect, she was starving to death,’ Justice Champion said. ‘She was in appalling condition.’

Traumatised and with serious medical conditions, the woman spent more than two months in hospital recovering – and for much of that time nobody knew her real identity. 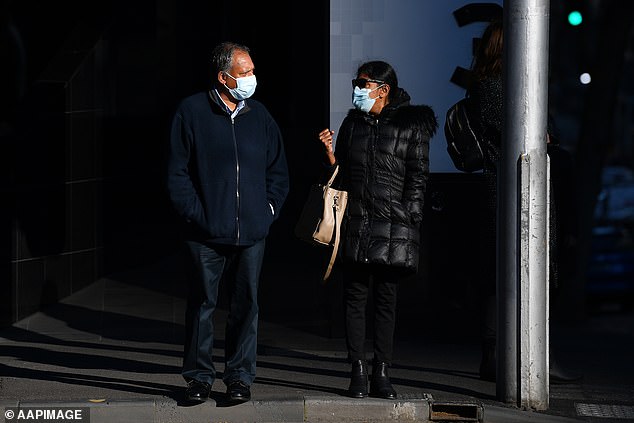 The wicked slavers face their fate in Melbourne on Wednesday 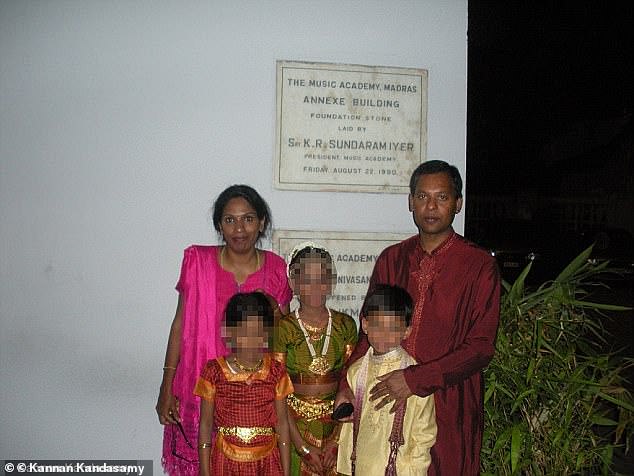 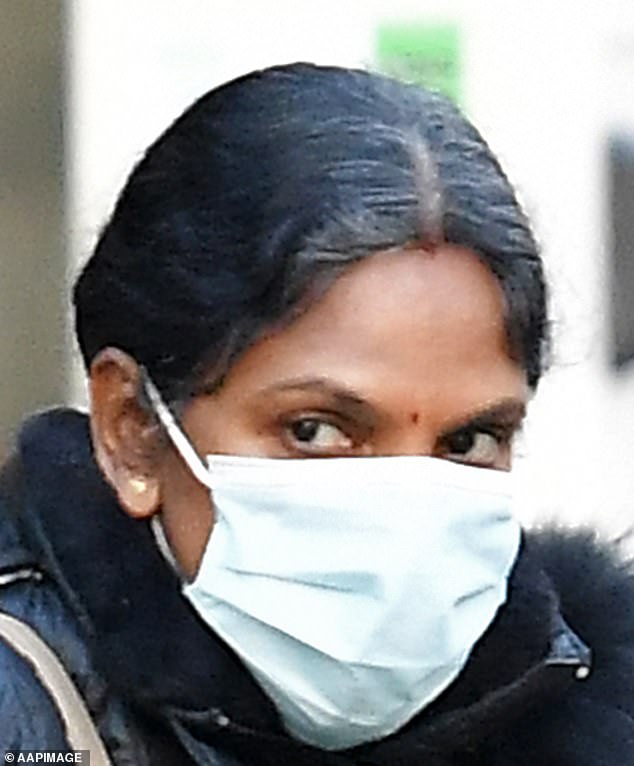 Evil Woman: Kumuthini Kannan heads into court in what are expected to be her final moments of freedom for some time

‘She was in a bad way when she was found, we accept that,’ Dr Boas said.

But he submitted her condition ‘fell short’ of becoming an aggravating factor that might earn his client a harsher sentence.

The court heard the couple had decided to keep the woman captive after she overstayed her holiday visa.

‘They were in a sense all trapped unless they were all prepared to fess-up,’ Mr Maidment said.

Yet four weeks later, the couple packed their bags and left the woman caged inside the family home while they enjoyed a family trip back to India.

In closing the Crown case in April, Mr Maidment said the couple’s payments to the woman had amounted to just $3.39 a day in exchange for childcare, washing, cleaning and preparing meals.

The court heard the woman had been effectively stranded in her captive home, unable to even use a bus or call for help from her family back in India.