People who are better at making up ‘bulls**t’ explanations for things tend to have a higher cognitive ability than their peers, a study has concluded.

Experts from Ryerson University in Toronto, Canada, conducted tests to explore the link between people’s willingness and skill at lying and their cognitive abilities.

Fortunately, even though smarter people are better at making up nonsense, the team found that they were less likely to do so than their less-intelligent counterparts.

The researchers also found that people who are more willing to make things up are also more susceptible themselves to believing profound-sounding twaddle.

Similar results — that liars are more vulnerable to misinformation — were reported back in March by researchers from the University of Waterloo, in Ontario, Canada. 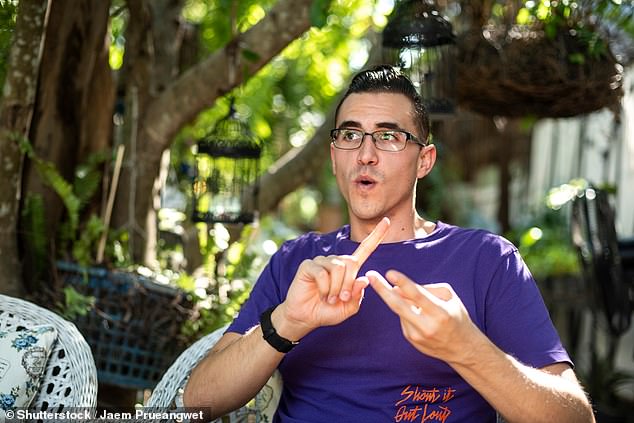 People who are better at making up ‘bulls**t’ explanations for things tend to have a higher cognitive ability than their peers, a study has concluded (stock image)

While this probably wasn’t what Pablo Picasso had in mind when he said ‘Art is not truth’, Ms Kara-Yakoubian said that, in one sense, it was through art that she became interested in the psychology of bulls**t.

In a previous study, she and her colleagues found ‘that people couldn’t differentiate artspeak (i.e., the language artists and art scholars use to discuss art) from pseudo-profound bulls**t,’ the clinical psychologist explained to PsyPost.

‘I thought this was amusing, as I was doing a minor in Fine Arts at the time, predominantly taking art history courses,’ she added.

‘The more I bulls**tted an essay, the better my grade was. Naturally, the research grew on me; I could see its relevance in my life!’

‘A person’s bulls**tting ability is positively associated with how smart they seem and how smart they genuinely are,’ paper author and clinical psychologist Mane Kara-Yakoubian of Ryerson University told PsyPost.

‘We propose that bulls**tting may have emerged as an energetically inexpensive strategy of obtaining prestige, status, or goods in domains where success is determined by the subjective evaluation of others.’

Such areas, she noted, include politics, public speaking and the fine arts.

‘A person can go through the process of acquiring the necessary skills to succeed in a particular domain, or they can bulls**t their way through it, and be rewarded similarly,’ Ms Kara-Yakoubian continued.

In their study, Ms Kara-Yakoubian and colleagues conducted two experiments to look for associations between people’s willingness to bulls**t, their ability to do so and their levels of cognitive ability.

In the first study, which involved 483 students from the University of Waterloo, Ontario, participants were presented with the names of ten theoretical concepts — six of which were real, and four of which were fictitious.

For example, real terms included ‘cognitive dissonance’ (the sense of discomfort felt when one holds two contradictory beliefs) and ‘general relativity’ (the theory that mass can distort the fabric of space and time, an effect experienced as gravity).

Each participant was asked to rate their knowledge of each of the ten concepts, real and fake, on a five-point scale that ranged from ‘never heard of it’ to ‘know it well, understand the concept’.

From their responses to the phoney theories, each subject was given a score based on their willingness to bulls**t — that is, to feign knowledge of the fake concepts. 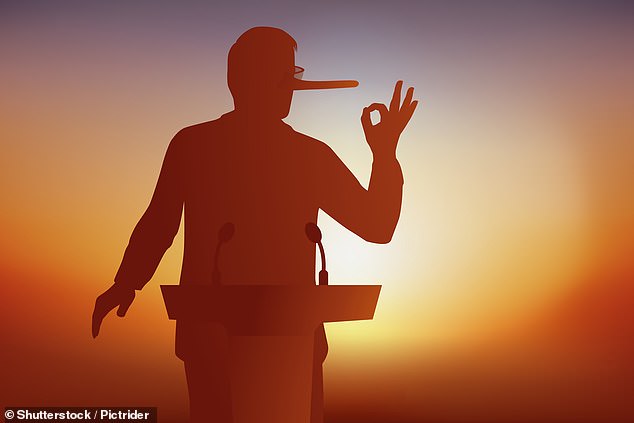 ‘We propose that bulls**tting may have emerged as an energetically inexpensive strategy of obtaining prestige, status, or goods in domains where success is determined by the subjective evaluation of others,’ clinical psychologist Mane Kara-Yakoubian told PsyPost . Such areas, she noted, include politics (pictured), public speaking and the fine arts

Following this, the researchers selected a subset of 220 of these participants, dubbed the ‘Bulls**t Producers’, and tasked them to ‘produce the most convincing and satisfying explanation’ for each of the ten concepts.

These producers were instructed — if they were unfamiliar with a given term — to creatively make up an explanation that they felt others would accept.

Explanations were then assessed by a different group of 263 volunteers and rated on a scale of one-to-five for both how ‘accurate’ and satisfying it was.

Finally, based on the ratings of their descriptions for the fake concepts, each producer was given a ‘Bulls**t Ability Score’.

These scores were then compared to the results of tests of verbal intelligence, abstract reasoning and sensitivity to pseudo-profound statements.

The second experiment — which involved 534 undergraduate students — mirrored the first, with the addition that the participants doing the ratings were also asked to judge the intelligence of the producer of each explanation.

Based on ratings of their descriptions of fake theoretical concepts, study participants were given a ‘Bulls**t Ability Score’ on a scale of one to five

The researchers found that those participants who were more adept at producing satisfying and seemingly accurate explanations of fake concepts also tended to score higher in tests of both verbal intelligence and abstract reasoning.

However, the team also found that the more intelligent people were — and, by extension, the more artful they were bulls**tting — the less willing they actually were to make things up in the earliest part of the experiment.

‘We found that bulls**tting ability and bulls**tting willingness were independent of each other,’ Ms Kara-Yakoubian told PsyPost.

The reluctance of smarter individuals to engage in bulls**t, she added, ‘might be explained by their greater capacity to attribute mental states to others’ — a skill which psychologists refer to as the ‘theory of mind’.

This, she continued, enables more intelligent people ‘to be more cognizant of when bulls**tting will work and when it won’t.’

With their initial study complete, Ms Kara-Yakoubian said, future research might explore the relationship between bulls**ting and theory of mind.

The team are also considering the potential to explore personality factors that might be connected to an individual’s willingness to make thing up.

The full findings of the study were published in the journal Evolutionary Psychology.

WHAT ARE THE NINE WAYS TO SPOT A LIAR?

The big pause: Lying is quite a complex process for the body and brain to deal with. First your brain produces the truth which it then has to suppress before inventing the lie and the performance of that lie.

This often leads to a longer pause than normal before answering, plus a verbal stalling technique like ‘Why do you ask that?’ rather than a direct and open response.

The eye dart: Humans have more eye expressions than any other animal and our eyes can give away if we’re trying to hide something.

When we look up to our left to think we’re often accessing recalled memory, but when our eyes roll up to our right we can be thinking more creatively. Also, the guilt of a lie often makes people use an eye contact cut-off gesture, such as looking down or away.

The lost breath: Bending the truth causes an instant stress response in most people, meaning the fight or flight mechanisms are activated.

The mouth dries, the body sweats more, the pulse rate quickens and the rhythm of the breathing changes to shorter, shallower breaths that can often be both seen and heard.

Overcompensating: A liar will often over-perform, both speaking and gesticulating too much in a bid to be more convincing. These over the top body language rituals can involve too much eye contact (often without blinking!) and over-emphatic gesticulation.

The more someone gesticulates, the more likely it is they might be fibbing (stock image)

The poker face: Although some people prefer to employ the poker face, many assume less is more and almost shut down in terms of movement and eye contact when they’re being economical with the truth.

The face hide: When someone tells a lie they often suffer a strong desire to hide their face from their audience. This can lead to a partial cut-off gesture like the well-know nose touch or mouth-cover.

Self-comfort touches: The stress and discomfort of lying often produces gestures that are aimed at comforting the liar, such as rocking, hair-stroking or twiddling or playing with wedding rings. We all tend to use self-comfort gestures but this will increase dramatically when someone is fibbing.

Micro-gestures: These are very small gestures or facial expressions that can flash across the face so quickly they are difficult to see. Experts will often use filmed footage that is then slowed down to pick up on the true body language response emerging in the middle of the performed lie.

The best time to spot these in real life is to look for the facial expression that occurs after the liar has finished speaking. The mouth might skew or the eyes roll in an instant give-away.

Heckling hands: The hardest body parts to act with are the hands or feet and liars often struggle to keep them on-message while they lie.

When the gestures and the words are at odds it’s called incongruent gesticulation and it’s often the hands or feet that are telling the truth.