The Church of Scotland has come under fire after campaigners claimed that its use of the term ‘leper’ in a crossword was ‘archaic, derogatory and harmful’.

The church used the term in the June edition of its in-house Life and Work magazine as the answer to 2 Down – Outcast (5).

Leper comes from leprosy, a chronic infectious disease that affects the skin, nerves and eyes.

It features in the Bible with one of Jesus’s most famous miracles seeing him heal a man suffering from leprosy with a single touch.

However, it is more commonly used as a term to describe a person who is strongly disliked and avoided by other people because of something bad they have done.

Linda Todd, CEO of The Leprosy Mission Scotland, wrote to the Church of Scotland magazine to criticise the crossword.

Linda Todd, CEO of The Leprosy Mission Scotland, wrote to the Church of Scotland magazine to criticise its use of the word leper in a crossword

She added that she was ‘somewhat dismayed’ and said the use of ‘the ‘L’ word’ should be banned.

Ms Todd said: ‘One of the most damaging effects of leprosy is the stigma, isolation and discrimination it can lead to.

‘The use of the word ‘leper’ to describe someone affected by leprosy is archaic, derogatory and harmful.

‘People affected by leprosy have asked that it not be used – surely that in itself should be reason enough to stop.’

‘In fact we have a campaign entitled ‘Delete the L word’,’ she added.

Ms Todd’s also requested that the magazine use terms such as ‘people affected by leprosy’ or a ‘leprosy village or colony’, rather than ‘leper’, in the future. 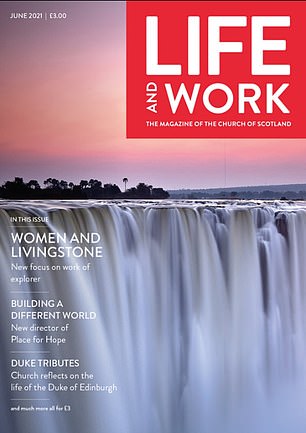 A spokesperson for Life and Work said: ‘We were grateful to the leprosy society for bringing the issue to us and we were happy to publish their letter to the editor raising awareness about the impact of language and the leprosy society’s campaign.’

Leprosy is a long-term infectious disease which can result in the inflammation of the nerves, respiratory tract, skin, and eyes.

It is caused by a slow-growing bacterium called Mycobacterium leprae, and is more likely to be caught by children than adults.

However, it is only contagious if someone comes into close and repeated contact with droplets from the nose and mouth of untreated patients.

Since 2015 there have been an average of five new cases of leprosy in the UK each year, according to the Leprosy Mission England and Wales.

Historically lepers have often been ostracised by their families and communities, leading to the setting up of leper colonies during the Middle Ages to quarantine patients.

The disease is initially symptom-less and can remain undetected for five to 20 years.

The disease, also known as Hansen’s Disease, can cause nerve damage that leads to disfiguring skin sores and nerve damage in the arms and legs.

It is easily treatable with a course of multi-drug therapy over a period of six to 12 months.