Boris Johnson today poured cold water on the prospect of easing the remaining coronavirus rules early as he said rising case numbers mean the nation must be ‘cautious’.

The Prime Minister has delayed ‘freedom day’ for four weeks to July 19 but a two week review will take place on July 5 to see if the return to normal can be moved forward.

But Mr Johnson struck a pessimistic tone during a visit to a laboratory in Hertfordshire as he said ‘Delta’ variant cases, hospitalisations and admissions to intensive care are still rising.

However, he insisted it is ‘looking good’ for the rules to be lifted on the ‘terminus point’ of July 19 as he said the ‘vaccination rollout is going gangbusters’.

The PM was also asked this morning to rule out another lockdown this winter but he declined to do so as he said ‘some new horror’ could emerge which ‘we simply haven’t budgeted for’. 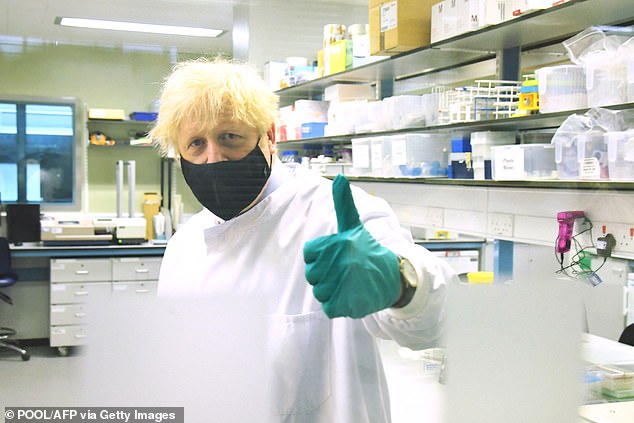 Boris Johnson struck a pessimistic tone during a visit to a laboratory in Hertfordshire as he said ‘Delta’ variant cases, hospitalisations and admissions to intensive care are still rising 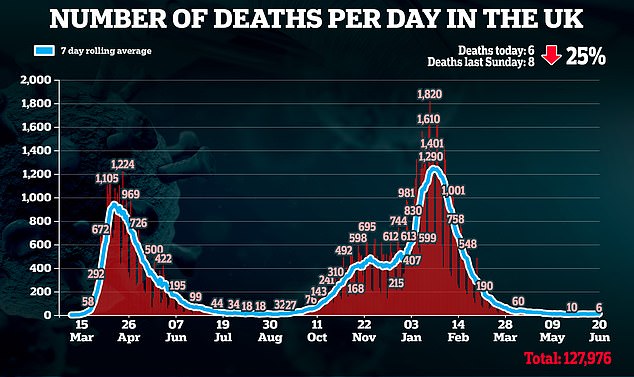 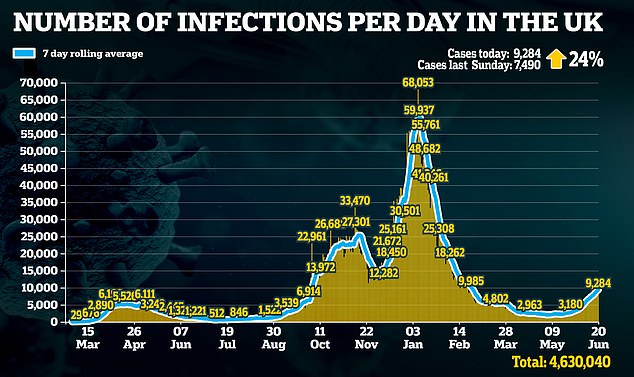 Tory MPs, hospitality chiefs and travel bosses are all hopeful the PM will accelerate the nation’s exit from lockdown.

But Mr Johnson appeared to suggest that is unlikely as he painted a grim picture of the spread of the ‘Delta’ variant.

Asked whether he will bring forward ‘freedom day’, he said: ‘As I say, the vaccination rollout is going gangbusters and loads of people are coming forward now for their second jabs.

‘Please come forward, get your second jab, and it is great that today we will have done all of JCVI one to nine, so everybody over 50 will have been offered two jabs as of today plus all care workers, all the vulnerable groups, huge numbers of people.

‘I think almost 60 per cent of adults in this country have now had or been offered two jabs so we are one of the most vaccinated countries in the world.

‘But look at the numbers of delta, the delta variant, it is sadly going up still, it is going up by about 30 per cent a week in cases, hospitalisations up by roughly the same amount and so sadly ICU admissions into intensive care.

‘So we have got to be cautious but we will be following the data the whole time.’

Mr Johnson said it is still ‘looking good’ for the July 19 date amid fears among some Tory MPs that the PM could again delay the lifting of the remaining curbs.

Asked to rule out further lockdowns in the future, the premier said: ‘You can never exclude that there will be some new disease, some new horror that we simply haven’t budgeted for, or accounted for.

‘But looking at where we are, looking at the efficacy of the vaccines against all variants that we can currently see – so Alpha, Delta, the lot of them, Kappa – I think it’s looking good for July 19 to be that terminus point.

‘I think what the scientists are saying is that things like flu will come back this winter, we may have a rough winter for all sorts of reasons, and obviously there are big pressures on the NHS. 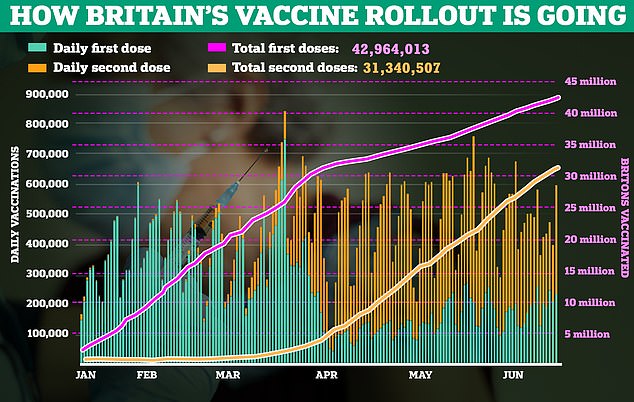 ‘All the more reason to reduce the number of Covid cases now, give the NHS the breathing space it needs to get on with dealing with all those other pressures, and we are certainly going to be putting in the investment to make sure that they can.’

Mr Johnson’s comments came after Chris Hopson, chief executive of NHS Providers, said hospital admissions are ‘slowly rising’ but are nothing like the rates seen during previous waves.

‘It’s rising relatively slowly but it’s nowhere near anything like the kind of numbers we’ve had in previous waves.’