Hidden in thick sea fog, the Border Force’s powerful cutter Seeker raced from the middle of the English Channel carrying 30 migrants towards Dover on Thursday.

It had just plucked them from an unseaworthy black rubber dinghy launched from a French beach before dawn and destined for Britain’s south coast.

Seeker’s arrival at Dover port with 30 men of multiple nationalities did not merit a mention on the afternoon news.

Boat migrants, after all, had made headlines the day before when the Government announced 5000 have crossed the Channel this year. It is now predicted 10,000 will cross in 2021 – a landmark for illicit sea immigration to this country. 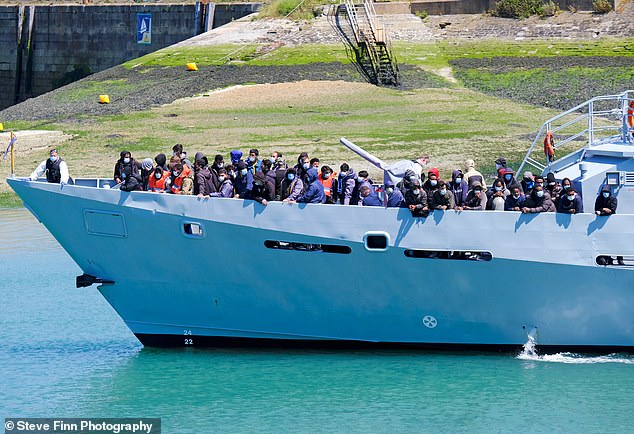 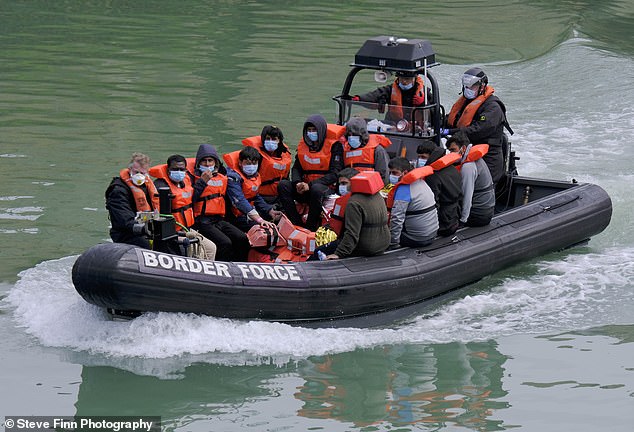 The cutter plucked migrants to safety under the eye of French Navy rescue ship Abeille Liberte, which was illegally in English waters from that morning. Pictured: Migrants brought into Dover Marina by Seeker on Thursday

Worryingly, the final tally could be higher still because thousands of migrants are currently waiting in France with the word ‘England’ on their lips.

Yet perhaps more concerning is what went on in the Channel before Seeker brought these 30 strangers to our shores.

We have discovered that the cutter plucked them to safety under the watchful eye of a French Navy rescue ship, Abeille Liberte, which was illegally in English waters of the Channel from 9.52 (British time) that morning.

Maritime tracking stations show Abeille Liberte had left the French port of Boulogne at 9.11 (British time) the previous evening before starting a night watch of the Channel.

It may even have spotted and escorted the rubber dinghy on its route from France towards England.

We don’t know the full story. For Seeker, at least, appears to have been operating in secrecy that day. We understand no messages between it and Abeille Liberte were made on public radio channels – as is customary – before Border Force picked up the migrants. 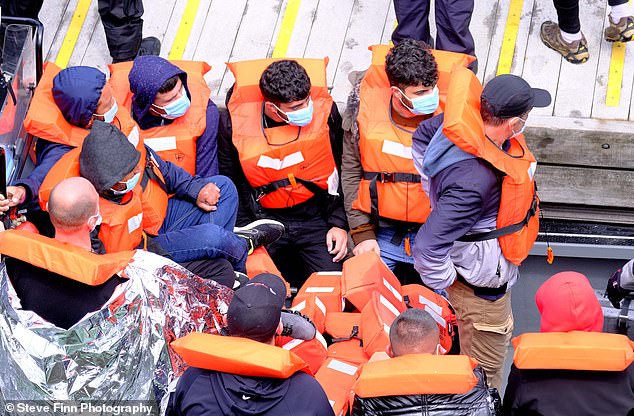 Seeker appears to have been operating in secrecy that day. We understand no messages between it and Abeille Liberte were made on public radio channels – as is customary. Pictured: Migrants brought into Dover Marina by Seeker on Thursday 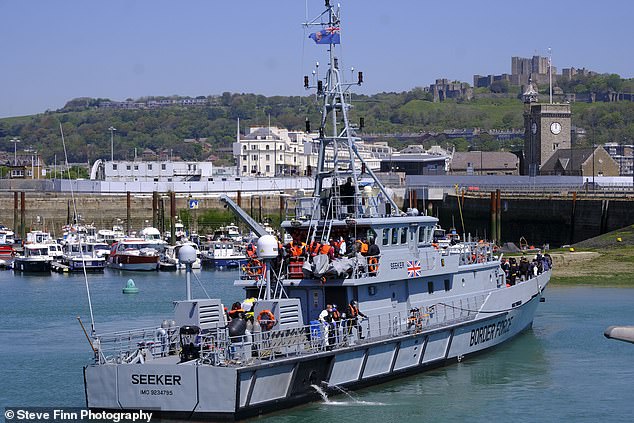 After the mid-Channel collection, Seeker (pictured on June 1) turned for home before suddenly disappearing off the radar at 12.43pm British time

And after the mid-Channel collection, it turned for home before suddenly disappearing off the radar at 12.43pm British time.

At that moment it had turned off its Automatic Identification System, known as AIS and used to pinpoint vessels’ positions and stop collisions.

This meant the cutter’s return journey to Dover with its migrant cargo was impossible to track for other ships or even maritime authorities monitoring the hundreds of sailings that day, in dangerously heavy fog in the Channel.

This covert behaviour follows the Mail’s shocking expose this month of how another Border Force cutter had entered French waters to pick up migrants and ferry them to Britain.

The collection on the French side of the Channel was organised in a public radio channel conversation between senior crew of Border Force’s Valiant and a French patrol ship Athos, that was heard by the Mail.

Our report sparked an investigation by Home Secretary Priti Patel, the result of which has not been announced publicly. But a Home Office source told us emphatically: ‘The job of Border Force is to secure the UK’s border, not to facilitate illegal entry into it.’

Since the expose, we have discovered a number of incidents that suggest Border Force is now trying to hide the way it is helping bring cross-Channel migrants into Britain. Seeker’s activity on Thursday – when it did not use public radio and switched off the AIS – is only the most recent.

We have heard numerous reports of highly irregular radio silence on public airwaves in recent days between Border Force vessels and French Navy ships, meaning that arrangements for migrant handovers at the sea frontier in the centre of the English Channel cannot be overheard.

In addition, there are claims that Border Force vessels are illegally and dangerously switching off AIS which means migrant pick-ups are not fully monitored.

A Home Office spokesperson refused to respond to the Mail investigation, saying: ‘we do not comment on operational matters in the Channel because to do so could provide an advantage to the ruthless criminals behind these crossings.’ 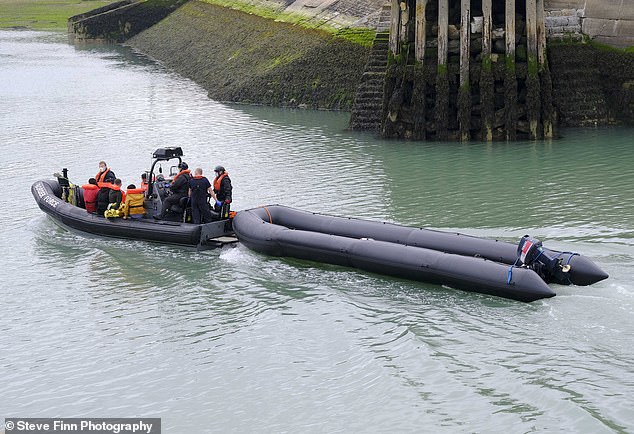 At that moment, Seeker (rib pictured on Thursday) had turned off its Automatic Identification System, known as AIS and used to pinpoint vessels’ positions and stop collisions 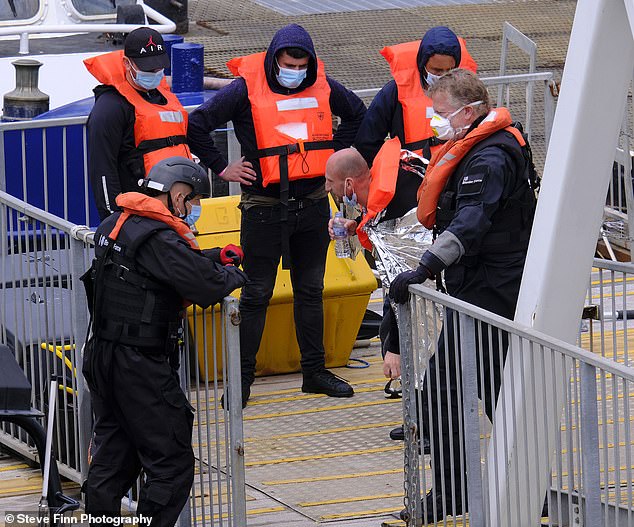 Meanwhile, maritime border rules are being breached regularly by the French Navy.

The Abeille Liberte entered English waters this week and another French rescue ship on migrant patrol in the Channel – P618 Escaut, which did have its AIS operating – did so on Monday.

‘The radio silence started after the balloon went up at the Home Office with the Mail revelation that Valiant was picking up migrants in French waters,’ said the south coast sailor who handed us the public radio channel conversation for our expose proving Britain’s Valiant was entering French waters to pick up migrants.

He added yesterday: ‘The French are using the radio to call up Border Force, but Border Force is not answering. I am listening in all the time. I am sure the new silence is not a coincidence. Border Force don’t want to be overheard.

‘I believe they are using mobile phones instead of maritime radio to communicate with the French over any arrangements for mid-Channel migrant handovers.’

Last year, the Mail revealed that the French Navy routinely come into English waters, even close to the White Cliffs of Dover, to pass migrants to Border Force vessels.

We were told by a respected sea vessel tracking agency that the French captains also turn off their AIS to hide their ‘operation purposes’ and ‘keep route information secret’.

The French, of course, say this is not a mess of their making. They say their priority is to preserve human life in the Channel. Brainwashed by people smugglers into believing that Britain is the best place to settle rather than Europe, the migrants often refuse to be rescued by the French Navy.

They have threatened to jump into the sea or even throw children overboard to avoid being picked up because they believe it will mean a return to France.

This, insist the French, leaves them with little option but to shadow the boats across the Channel where, once in English waters, the migrants know they will be brought to England.

But their argument flies in the face of Home Office pledges to stop the migrant boat flow to Britain. This week, a former coxswain of the Royal National Lifeboat Institution (RNLI) wrote to Miss Patel offering a solution to the escalating crisis.

He showed a copy of his letter to the Mail in which he insists the French, by allowing unsafe migrant boats to leave their shores, are breaching their own very specific maritime laws. 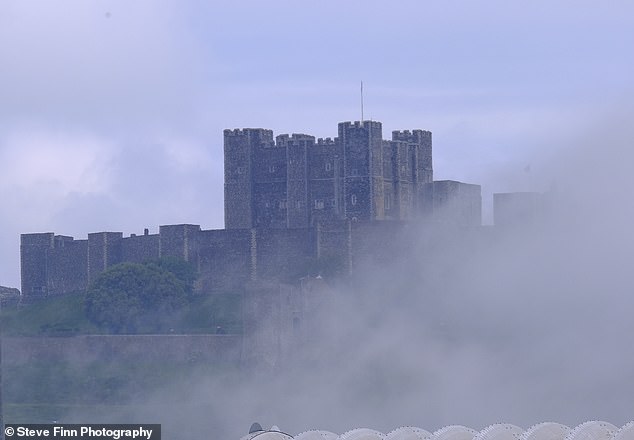 Not even maritime authorities monitoring the hundreds of sailings that day, in dangerously heavy fog (pictured) in the Channel, could track Seeker on its return journey 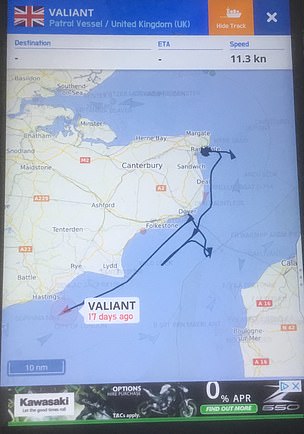 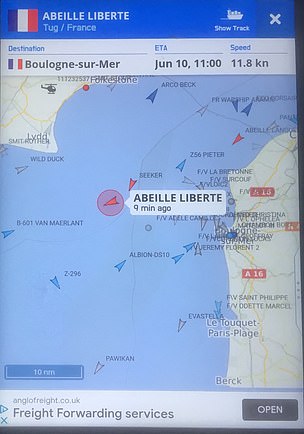 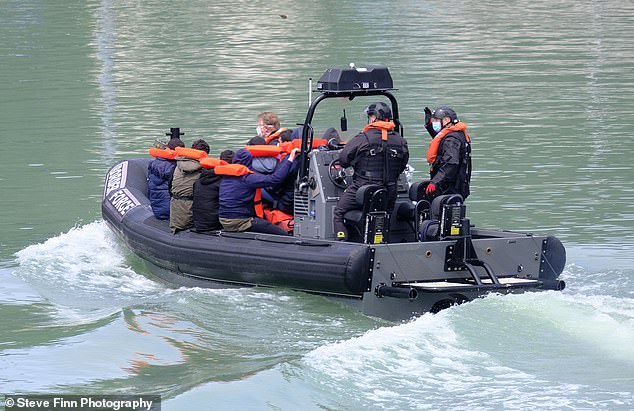 We have discovered incidents that suggest Border Force is trying to hide the way it is helping cross-Channel migrants to UK. Seeker’s activity on Thursday (above) is only the most recent

Unlike the British and many other nations, the French have a set of strict maritime rules which dictate that no unseaworthy boats must ever be launched.

The former coxswain, Charles Sharrod, wrote in his letter: ‘French maritime law clearly shows that these (migrant) vessels are sailing within the French territorial waters without the necessary (safety) qualifications.

‘The French are, therefore, not enforcing their own laws and are allowing poorly equipped vessels to leave their shores in great numbers and at great risk to their occupants.’

Mr Sharrod’s letter explained: ‘All vessels in French waters within six miles of their coast must have a licensed operator/skipper if powered by an engine of more than six horsepower, a foghorn, lifejackets for all on board, 142 Newtons (32 pounds) of buoyancy force in any kind of inflatable, three red hand flares, a torch, a baler, and compass’.

Fines for overloading a vessel are €1500 and up to one year in prison. It has been evident for some time that the French have been ignoring their own maritime laws – as well as escorting illegal vessels out of their own territorial waters (into English waters).’

Mr Sharrod told us yesterday: ‘A six horsepower engine is tiny and is used on tiny boats ferrying a couple of people around a port area from the mother ship.

‘The migrants’ boats have much bigger engines, and that means they are covered by French maritime laws.’

Before he retired, Mr Sharrod, 74, ran a business advising on contingency plans in times of national or international emergency, such as virus pandemics or disasters.

He devoted his spare time to being a volunteer coxswain for the RNLI, as had his father before him. Based in Hastings, East Sussex, there are few who know more about the sea, the English Channel, and their dangers, than him.

Importantly, Mr Sharrod believes that the very detailed French maritime laws trump the 26-year-old international convention for safety at sea which the French say they follow. This says that all mariners have a legal duty to preserve human life at sea and help vessels in distress.

Mr Sharrod told us: ‘If these unseaworthy migrants’ boats were not allowed to set off from Calais or Dunkirk beaches because they breach France’s maritime law, then there would not be any migrant vessels in distress crossing the Channel so the convention would be irrelevant.’

Meanwhile, the migrants continue to be picked up by Border Force. This week the total brought to Dover has reached more than 300. On Thursday alone, the tally was 70. 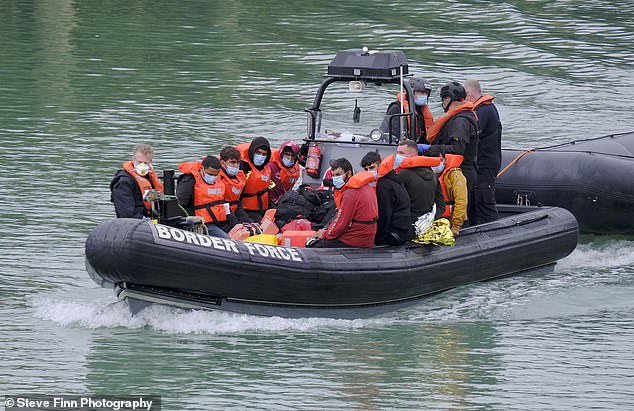 Migrants continue to be picked up by Border Force. This week, the total brought to Dover has reached more than 300. Pictured: Migrants brought in by Seeker on Thursday 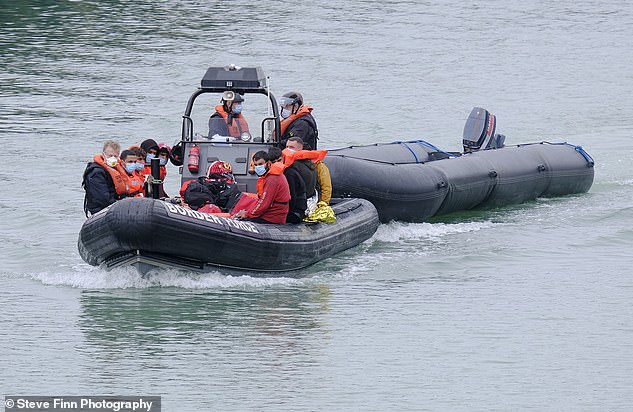 Yesterday morning by breakfast time, 14 had been picked up by an RNLI lifeboat off the coast of Kent at Dungeness.

We have discovered that the Border Force cutter Valiant, highlighted in our expose, entered French waters on a second occasion on May 31 at 1.26 British time – two days after its controversial assignation with the Athos.

It is not known whether it was picking up migrants or liaising with the French Navy. Since that time and date, however, its AIS system has been switched off.

We also know that on its journey to Dover with the 30 migrants on Thursday, Seeker turned off its identification system.

As of yesterday at six in the morning, it had not been put on again. Why the secrecy?

It makes those such as the south coast sailor and Mr Sharrod think something is going on. Even a deliberate cover-up.