Pitchers doctoring baseballs with foreign substances in violation of Major League rules will reportedly receive a 10-game suspension with pay as the commissioner’s office begins its crackdown on grip enhancers next week.

ESPN is reporting that MLB will make the announcement Tuesday in a memo to teams, which have already been briefed on a number of policy changes. The commissioner’s office previously announced that pitchers are to be checked for foreign substances by umpires, who can conduct 10 random inspections per game.

It has been six seasons since MLB has suspended any pitcher for using a foreign substance, and that wasn’t the result of an inspection, but rather just a blatant disregard for league rules. In that case, New York Yankees pitcher Michael Pineda was suspended 10 games when umpire Gerry Davis noticed pine tar on his neck.

In anticipation of the crackdown, some teams have already asked pitchers to work on throwing in the bullpen without the use of foreign substances, two players and an official told ESPN. 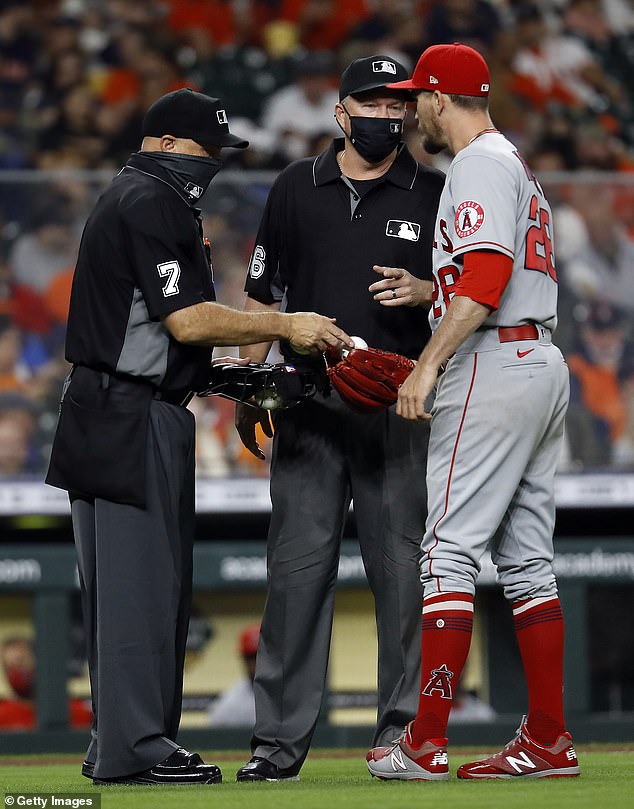 Rules 3.01 and 6.02(c) of the Major League rulebook have long prohibited the use of foreign substances by pitchers, although the the practice of doctoring balls to improve grip, spin, and control is nothing new.

But after promising to crack down on foreign substances in recent years, MLB is taking action this season as pitchers are enjoying historic success: Six no-hitters have already been thrown this season — one off the league record — and through May 31, hitters were batting just .236, the lowest mark since 1968.

MLB’s rulebook makes no distinction between the kinds of substances that will be prohibited, which ESPN reports could cause some consternation among pitchers.

For years, pitchers have improved their grip by inconspicuously mixing rosin and sunscreen lotion, but more recently, they’ve allegedly gained an advantage with the use of Spider Tack, a sticky concoction favored by weightlifters. (Pitchers are permitted to use a bag of dried rosin on the mound to help keep their hands dry)

RULE 3.01:  No player shall intentionally discolor or damage the ball by rubbing it with soil, rosin, paraffin, licorice, sand-paper, emery-paper or other foreign substance.

RULE 6.02: The pitcher shall not… apply a foreign substance of any kind to the ball.

A source described as a ‘high-ranking person on the players’ side’ told ESPN that there is a ‘broad consensus among players that Spider Tack is over the line,’ but other foreign substances are seen differently.

Recently New York Mets slugger Pete Alonso told reporter he doesn’t care if pitchers use foreign substances: ‘I would rather them have control.’

In a statement, the players’ union responded to ESPN’s report about the impending 10-game suspensions for violators.

‘The Players Association is aware that Major League Baseball plans to issue guidance shortly regarding the enforcement of existing rules governing foreign substances,’ read the statement. ‘We will communicate with Players accordingly once that guidance has been issued. We anticipate future discussions with the League regarding on-field issues, including the foreign substance rules and the baseballs themselves, as part of ongoing collective bargaining. Our continued focus will remain on fundamental fairness and player health and safety.’

ESPN is also reporting that several unidentified pitchers have said they will stop using Spider Tack and switch to pine tar, which hitters use to improve their grip on the handle of the bat. 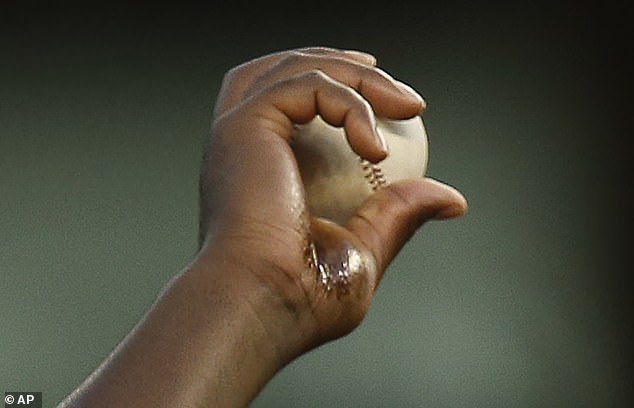 In this April 10, 2014 file photo, New York Yankees starting pitcher Michael Pineda, with a substance on his throwing hand, delivers a pitch during the first inning of a baseball game against the Boston Red Sox at Yankee Stadium in New York. Major league pitchers have been tinkering with the ball for years in search of an advantage, occasionally breaking major league rules in the process. But they might have to work a little harder on their deception this summer

Brian ‘Bubba’ Harkins, who was fired in 2020 for providing sticky foreign substances to MLB pitchers, revealed to Sports Illustrated that Kluber was among a list of clients that included Cole.

In response to the allegation, Kluber’s agent, BB Abbott, told Sports illustrated that Harkins is lying.

‘[Harkins] never personally gave anything of the sort to Corey Kluber nor has he ever used any substance prepared by Bubba [Harkins] in a MLB game,’ Abbott told SI in defense of his client. ‘If he is saying anything contrary to that, it is a blatant lie.’

Harkins, who served as the Angels’ visiting clubhouse manager, sued the Angels and MLB for defamation in August of 2020 after becoming the only staffer to be fired amid the league-wide crackdown on doctored baseballs. He claims that Kluber became a regular customer of his when the All-Star was pitching for the Cleveland Indians after hearing about it from a teammate. 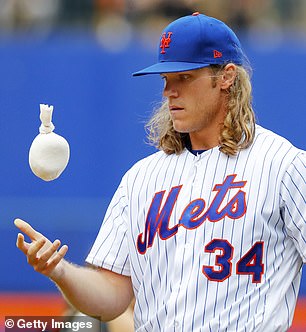 In his lawsuit, Harkins argued that the practice was widespread. He also shared an alleged text message from Cole in a January filing showing the All-Star requesting a concoction he claims he learned from former Angels reliever Troy Percival, who has since admitted to doctoring balls with a mixture of pine tar and rosin.

‘Hey Bubba, it’s Gerrit Cole, I was wondering if you could help me out with this sticky situation,’ the pitcher wrote, according to Harkins’s filing. ‘We don’t see you until May, but we have some road games in April that are in cold weather places. The stuff I had last year seizes up when it gets cold.’

Harkins’s lawsuit has since been tossed by a judge, who demanded that the former clubhouse attendant pay $35,000 in legal fees for the team and league.

Cole was pulled back into the controversy earlier this month when Minnesota Twins third baseman Josh Donaldson made comments correlating a drop in Cole’s spin rate with MLB’s anticipated crackdown.

Last week, Cole sidestepped questions about his suspected use of Spider Tack.

‘I don’t… I don’t know,’ Cole told reporters on a Zoom call in between several pauses. ‘I don’t quite know how to answer that, to be honest.’

The spin rate on Cole’s four-seam fastball declined amid the recent crackdown, decreasing by 125 rotations per minute as he gave up five runs in five innings during a loss to Tampa Bay.

But rather than the sudden absence of Spider Tack, Cole blamed the diminished spin rate on his mechanics.

‘I’m just not quite bringing out my best delivery,’ Cole said. ‘Of course it’s something that we monitor. Of course there are other variables that we monitor as well when we’re evaluating our performance from every game. You try to take as much information as you can as a player, and certainly that’s one of them.

‘We’re trying to get better this week and put in the work, and I’ll be as prepared as I possibly can for my next start.’

Cole had a better outing on Wednesday, allowing two runs to the Twins over six innings.

The crackdown is already underway in the minors, where four pitchers have been suspended this season for using banned foreign substances to doctor balls.

And that renewed emphasis on the rules may already be having a tangential effect in the Majors.

Since June 3, hitters are batting .247 (up from a near-record low of .236 over the season’s first two months) while spin rates have noticeably fallen, according to ESPN.