For years, a savage murderer known as the ‘Torso Killer’ dribbled out confessions to a New Jersey detective, closing cold cases into the brutal deaths of five young women that dated back to the late 1960s.

But there was one unsolved case the notorious serial killer would never admit to: The slayings of 17-year-old Mary Ann Pryor and 16-year-old Lorraine Marie Kelly in 1974.

In April, Richard Cottingham, 74, pleaded guilty to kidnapping the teenage girls and raping them for days before he drowned them in a motel room bathtub. 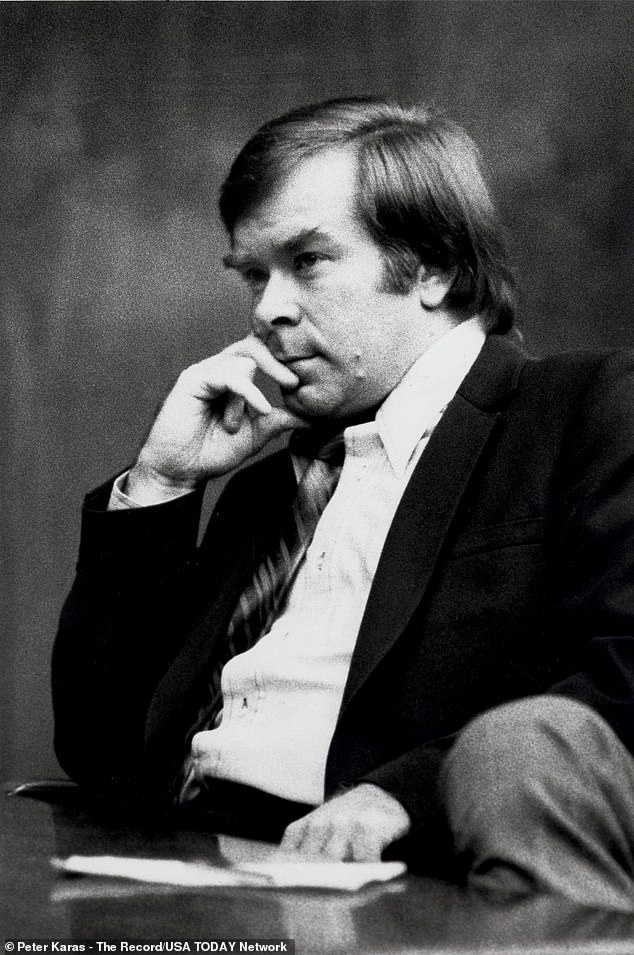 Richard Cottingham was known as the ‘Torso Killer’ dribbled out confessions to a New Jersey detective over a period of 21 years, closing cold cases into the brutal deaths of five young women that dated back to the late 1960s. 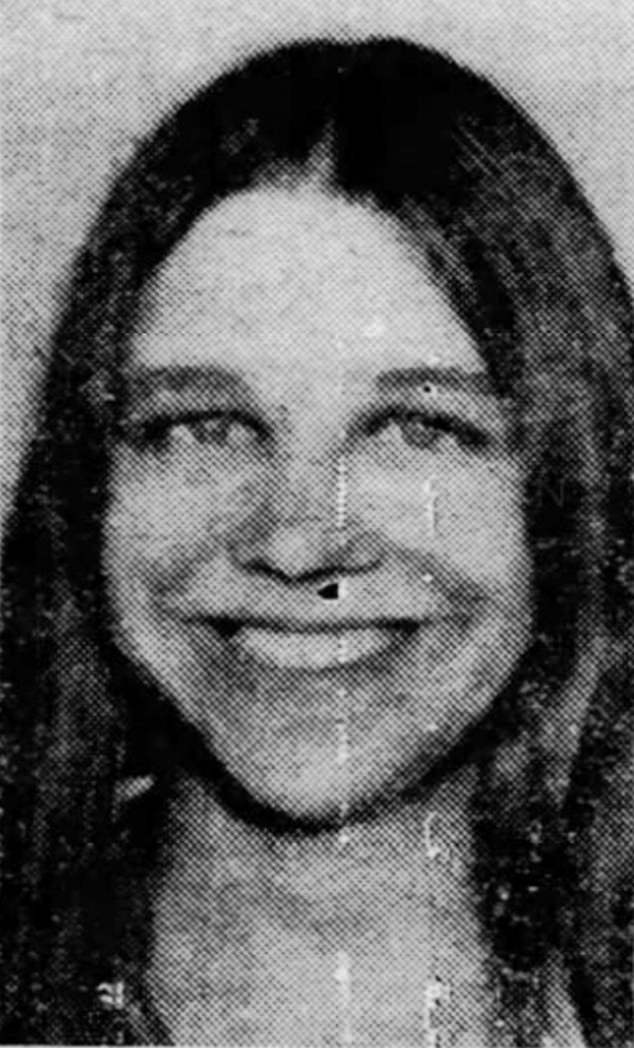 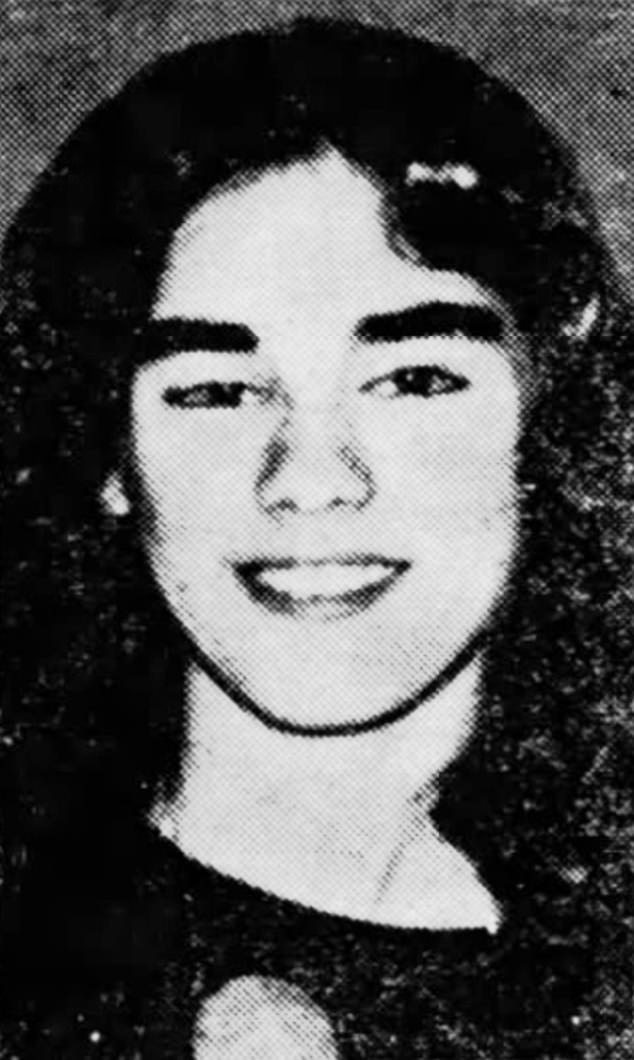 Lorraine Marie Kelly, 16, was alongside Mary Ann when she suffered the same fate

The teenagers were last seen on August 9, 1974, in North Bergen. They’d left home for a trip 13 miles north to a Paramus mall, telling family they planned to take a bus there to buy bathing suits for a trip to the Jersey Shore.

Witnesses at the time told police the girls were hitchhiking and got into a man’s car.

They were found five days after they went missing, identified by their jewelry when their nude, battered bodies were discovered facedown in the woods of North Jersey’s Bergen County.

Their murders shook the region but there were no clues in the girls’ backgrounds as to who might have harmed them.

It wasn’t until 2000 when a young detective in the Bergen County prosecutor’s office, Robert Anzilotti, was given the task of looking into the murders together with similar cold cases from the 1960s and 1970s of which there were at least five unsolved killings of girls. 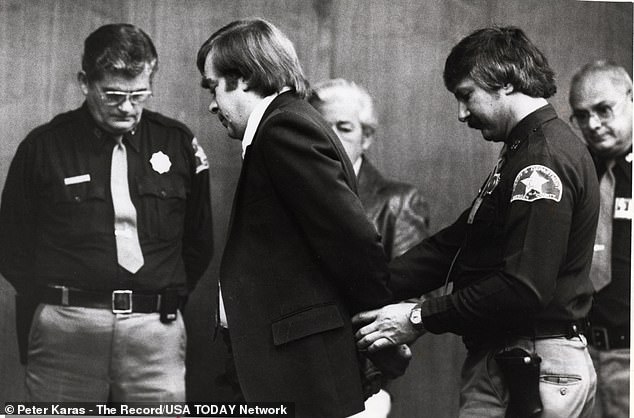 RIchard Cottingham was convicted of two New Jersey murders and three in New York. He’s been housed in Trenton’s New Jersey State Prison since 1981, serving a 200-plus year sentence

Rising through the ranks, he eventually became the chief of detectives in Bergen County, New Jersey.

His search for a killer led him to Richard Cottingham.

He was known as the ‘Torso Killer’ for brutally dismembering some of his victims by cutting off their limbs and heads. Cottingham was already in a New Jersey prison on a life sentence for other murders. 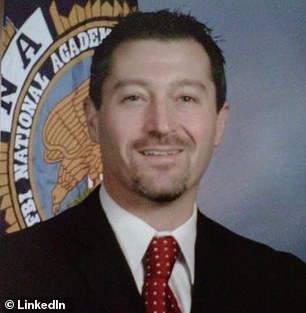 While he has claimed he was responsible for up to 100 homicides, authorities in New York and New Jersey have only officially linked him to 11 so far, including the two 1974 killings.

He was finally arrested in 1980 when a motel maid heard a woman screaming inside his room. Authorities found the maid alive, but bound with handcuffs and suffering from bite marks and knife wounds.

In the 1970s, Cottingham had a wife and children and held a job as a computer programmer for a health insurance company in New York, recalled Alan Grieco, a retired chief of detectives in Bergen County who helped convict Cottingham for the 1977 murder of a woman found outside a motel in northern New Jersey.

Investigators in both states were able to tie Cottingham to other murders and sexual assaults, but Grieco remembered Cottingham ‘played games’ with investigators for years regarding the Pryor-Kelly murders as he sought to trade information for better treatment in prison.

‘Seeing how the families are destroyed, you can’t help but feel their pain,’ he said. ‘I think he figured, ‘I’m going to just toy with them, and as long as I can drag it out, I will.’

Anzilotti first met Cottingham 17 years ago as the detective sought to close some of the county’s cold cases.

‘I thought he could be responsible for some,’ Anzilotti told the New York Times. ‘His name had floated around in the lore of Bergen County cold cases.’

It was a hunch and past investigative speculation together with the proximity of the crimes that drew Anzilotti to Cottingham who went to visit him in his prison cell.

The pair developed a unique relationship where Cottingham was sometimes testy and sometimes warm with Anzilotti.

Anzilotti would have the inmate transported to his office 75 miles away where the pair would play cards with the other detectives and eat pizza together.

When the room would finally clear, Anzilotti would begin to question Cottingham over the unsolved cases of dead girls. 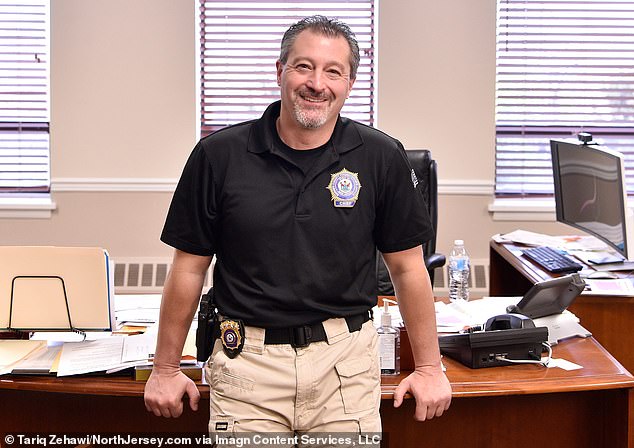 Rising through the ranks, he eventually became the chief of detectives in Bergen County, New Jersey before retiring from the force after 29 years in April

First over months and then ultimately years of face-to-face meetings, Cottingham began to loosen up. He enjoyed the break from prison life for a brief couple of hours.

Eventually he began to talk about the killing of the prostitutes for which he was already in jail for.

‘I wasn’t overly interested in them,’ Anzilotti said. ‘Those cases were already closed, but it was a way to get him comfortable to talk to me about murders.’

But the chief realized that Cottingham was at his most vulnerable on the ride back to prison while sitting in the back seat of the patrol car and ‘he would let his guard down’.

Anzilotti would secretly take notes while sitting in the front of the car as another detective drove.

After six years of visits, ‘He said, ‘I’m going to give you one,’ Anzilotti said, and he began to describe details that only the killer would know.

Cottingham gave the details of the killing of Irene Blase who was found strangled in Saddle River in 1969. 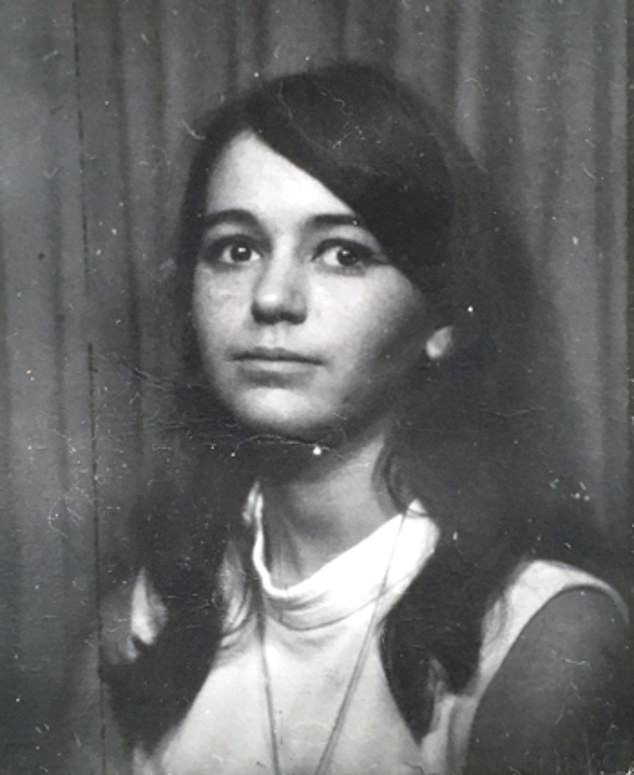 Anzilotti contacted the Blase family to inform them that he had a confession but asked that the cold case be quietly closed and not formally charged in the hope Cottingham might give up more information on other cold cases. The Blase family agreed

Falasca was 15 when she left her house in July 1969 but never returned having believed to have accepted a ride from a stranger.

Once against, Cottingham knew intricate details of the case.

It was a few years later that Cottingham began to reveal details of the murder of 13-year-old Jackie Harp who he abducted while walking home from school in 1968.

Members of her family agreed to forgo a guilty plea in open court in the hope Cottingham might spill more. 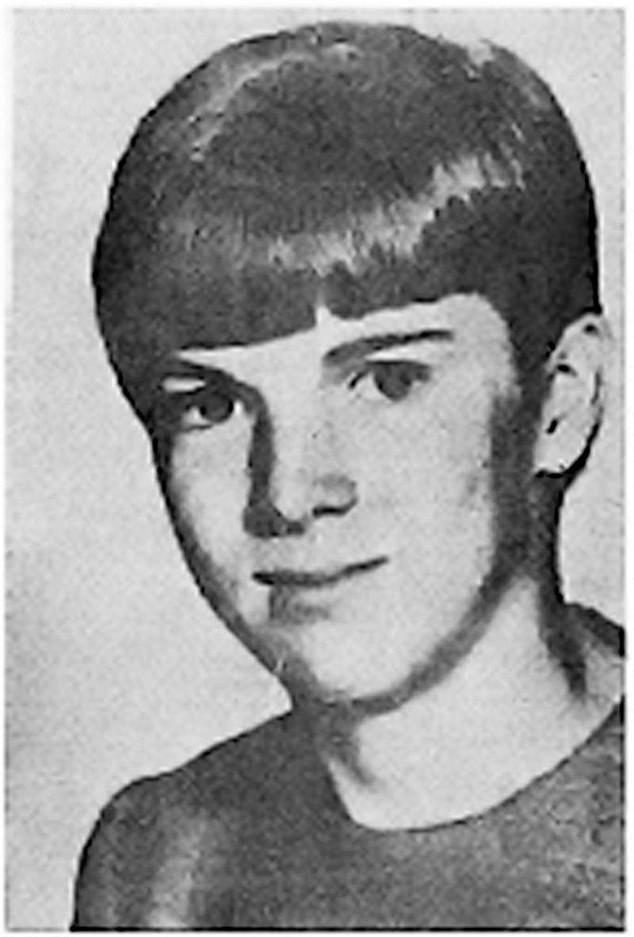 Jackie Harp, 13, was punched in the face and strangled with her band flag sling in July 1968 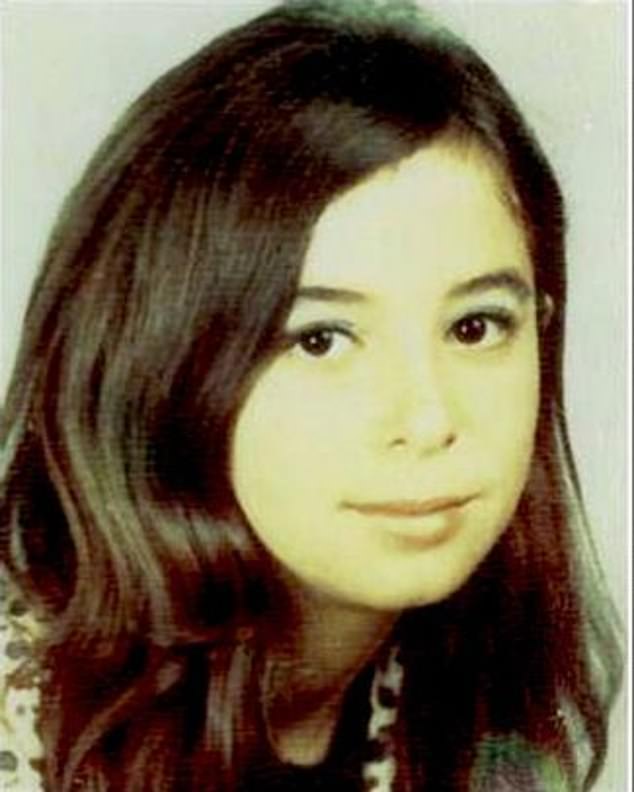 Denise Falasca, 15, was strangled with her crucifix chain and dumped from a car in July 1969

As the years wore on, Anzilotti began to consider retiring but would keep coming back to the two girls found dead in the woods, Mary Ann Pryor and Lorraine Marie Kelly.

Anzilotti tried to elicit a confession for years as Mary Ann’s sister, Nancy, repeatedly checked in with detectives for updates.

During one interaction Cottingham even implied he knew a lot more than he was letting on and explained his hesitancy.

‘He said, ‘I know once I give you that case, I’ll never see you again,’ Anzilotti explained. ‘He enjoys our relationship. He enjoys our time together.’

‘He’s embarrassed by this case,’ Anzilotti believes. ‘I think sometimes he grapples with his own gruesomeness back then.’

Just a few months ago, on March 12, Anzilotti summoned Cottingham to him to tell him that he had planned to end his 29-year career in law enforcement and retire.

‘I’m leaving. And before I go, I want to close out the Kelly-Pryor case,’ he said. 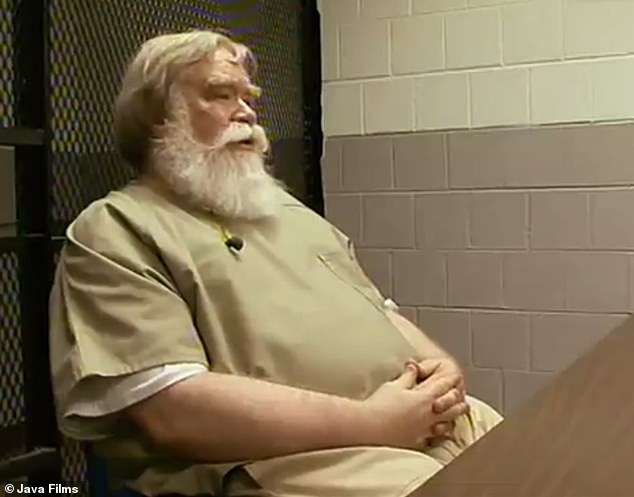 Cottingham was brought from state prison in Trenton up to the prosecutor’s Paramus offices three times during April – a 75-mile trip each way – pushing him to finally admit to the murders of Mary Ann and Lorraine, days before Anzilotti left the force

He brought Cottingham from state prison in Trenton up to the prosecutor’s Paramus offices three times during April – a 75-mile trip each way – pushing him to finally admit to the murders of Mary Ann and Lorraine, days before Anzilotti left the force.

In an April 14 confession to Anzilotti, the Bergen County prosecutor’s chief of detectives, Cottingham admitted to physically forcing Lorraine into a motel room and threatening to harm her if Mary Ann didn’t comply.

He confessed to raping them and tying them up as he slept so they wouldn’t escape. He then explained how he drowned them in the motel room’s bathtub before dumping their bodies.

‘He gave details about the murders that only the killer would know,’ Anzilotti explained.

‘What drove him to torture them was his sexual gratification of raping these girls and the power that he had over them,’ Anzilotti said. ‘In terms of what made him, on day three, kill them: It’s because, I believe, they had spent so much time with him that they could identify him.’

‘In his mind, he drowned them,’ Chief Anzilotti said, even though the medical examiner’s report said the teens died by asphyxiation. ‘In essence, he filled a bathtub up with water. He had them kind of hogtied behind their backs. One at a time. Then he put them face down into the tub. He was suffocating them against the bottom of the bathtub.’

The Pryor-Kelly case had been among North Jersey’s most infamous unsolved crimes yet Cottingham was always reluctant to discuss Mary Ann and Lorraine, Anzilotti said, because their murders ‘bothered him more than any other, probably because of the brutality of it’ coupled with their ages and the days he spent torturing them. 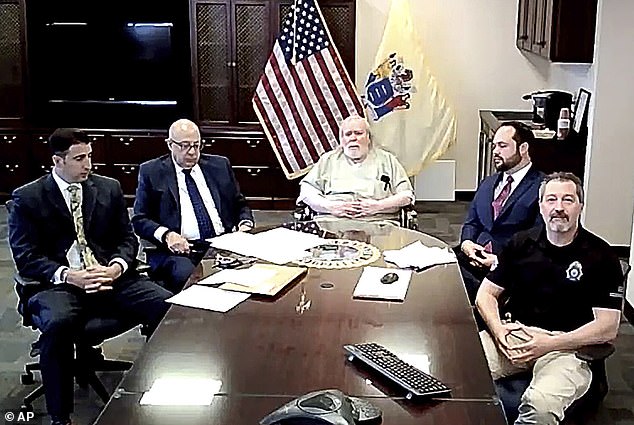 Richard Cottingham, center, is pictured pleading guilty to two 1974 murders, finally closing the cold case deaths of teenage friends who had left home for a trip to the mall and never returned. Cottingham, 74, is currently in state prison on a life sentence for other murders

Anzilotti got the confession on April 14 and Cottingham pleaded guilty on April 20.

The following weekend, Anzilotti retired from the force for good.

He believes there are still ‘dozens’ of outstanding cases in the tri-state area that might eventually be traced back to him.

‘He’s relieved that this cloud that’s been hanging over his head for many, many years is now removed,’ said defense attorney, John Bruno, adding that Cottingham has ‘serious regret’ for the crimes and hoped to give the families some closure.

‘I keep saying, before my time comes, I’d love some answers, and I never give up hope that we will get them,’ she had said in 2016.

As part of a plea agreement, prosecutors said Cottingham is expected to get two life sentences in July, to be served concurrently with the time he’s already serving.