Residents of ‘Tasmania’s worst development’ were electrocuted by their own kitchen taps, afraid rooves might cave in, and frustrated by mould, plumbing and wiring.

But it was their neighbours living down a huge, steep hill from the development put at the greatest risk by their ‘uninhabitable’ homes.

Eight unlucky families in the elevated McGill Rise subdivision, in Claremont just north of Hobart, were told to leave in March because the embankments around their homes posed ‘an intolerable risk’ of collapse.

This was not news to residents in houses below them on Abbotsfield Road, who were deeply worried about boulders and worse from the embankments above them crashing into their homes for years. 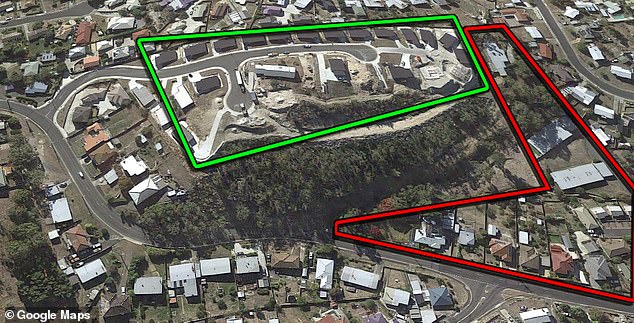 Tasmania’s worse development? Eight homes in McGill Rise (inside the green box) were evacuated after fears the embankments posed an ‘intolerable risk’ of collapse. Other homes are under threat from falling boulders and debris below (red box) 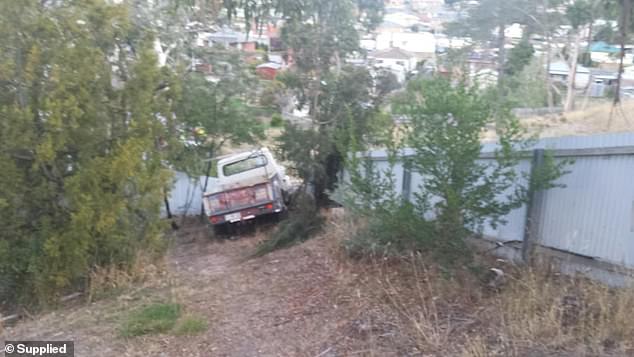 Home owner Linda was scared to be in her own yard, at 110 Abbotsfield Road, after an embankment on a home development in McGill Rise above their home collapsed under the weight of this builder’s truck, which then crashed into her fence 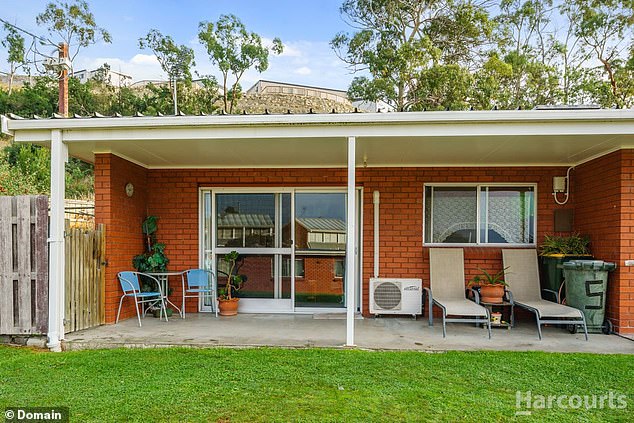 The front of 110 Abbotsfield Road, Claremont, with the houses at McGill Rise above clearly visible above the property. Previous owners Linda and Malcolm said boulders from the houses above regularly hit their back fence and rolled into their yard – as well as the builder’s truck

Linda told Daily Mail Australia she would have been killed had she been gardening on the day the embankment above her home collapsed under the weight of the builder’s three-tonne truck in 2018.

‘It took out 30m of our back fence plus retaining walls, two trees and about 8m of side fence and rested against a large gum tree, that’s what stopped it from going into the unit below us,’ she said.

The couple received a $10,500 insurance payout, but lost all peace of mind.

‘After that I didn’t go into my yard. I didn’t feel safe there,’ Linda said.

Glenorchy City Council said it investigated the risk to residents in the new development and took action.

‘Engineering reports have identified that there is ‘an intolerable risk’ that embankments for eight properties (out of 22) within the subdivision could collapse in a high rainfall event, posing a significant threat to life for any occupants of the affected properties,’ it said.

The decision was made after an audit of the construction work and independent engineering advice found the project’s building surveyor couldn’t ‘demonstrate the stability of building platforms’. 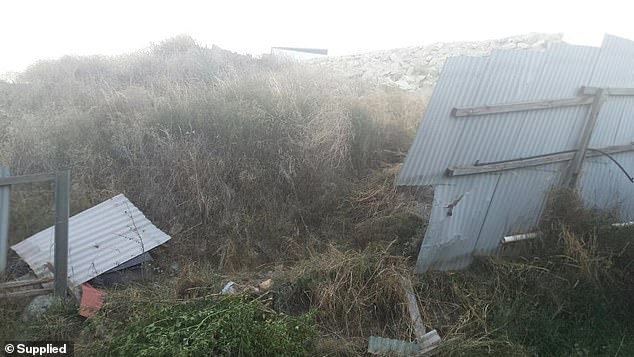 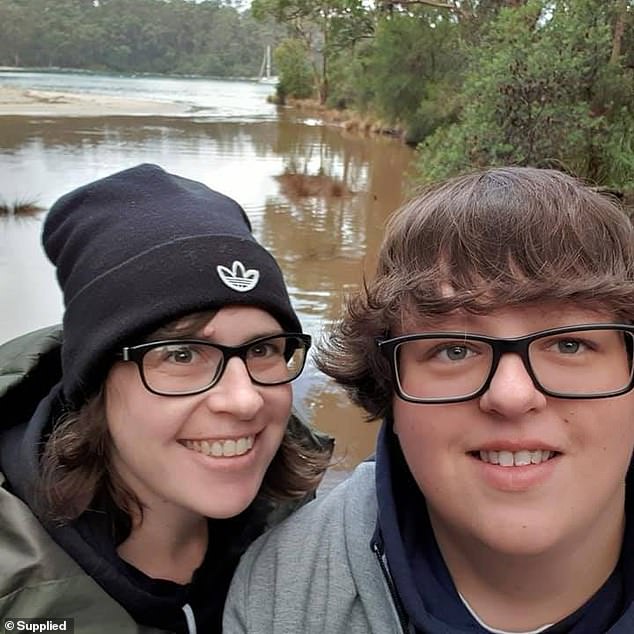 April and Nyssa Browne (pictured above) rented no.7 McGill Rise for a year and said it was a ‘horrible’ home

The subdivision comprised 22 houses all completed in the past eight years, owned by Aviation Consolidated Holdings, and understood to have been constructed by the same builder.

Karen Oliver, who lived in the unit below Linda and Malcolm, said she lived in constant fear she would be end up ‘dead in my own bed’ by a boulder rolling down the hill.

Rocks continually coming loose from the concrete-covered embankment above and rolling down the hill were the main worry for neighbours below McGill Rise.

‘A lot of them were about twice the size of a soccer ball,’ Malcolm told Daily Mail Australia.

The couple sold their home and moved after 23 years in the street.

‘That development would have been 95 per cent of why we sold up,’ Linda said. 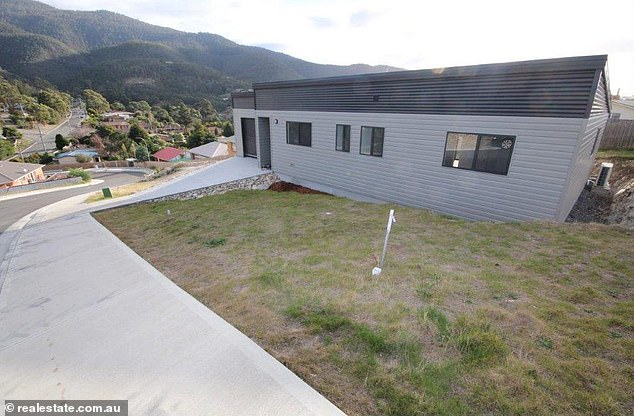 7 McGill Rise (pictured), where April and Nyssa Browne rented for a year 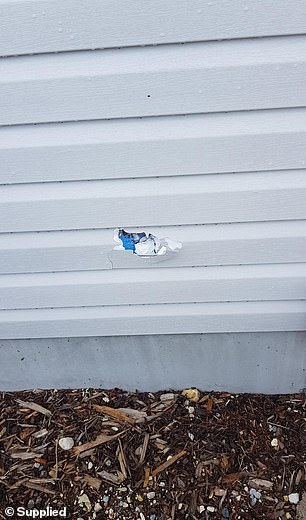 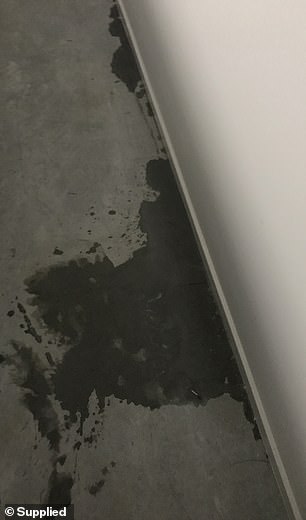 Nyssa Browne said she and wife April Browne ‘would rather have lived in a tent’. The main issues for the couple in their rented home, at 7 McGill Rise, were ‘overall poor construction’

Up in the development itself, the main issues were ‘overall poor construction,’ said Nyssa Browne, who rented one of the homes for a year from mid 2017.

‘It was horrible, I’d live in a tent if I had to rather than stay there again,’ Nyssa Browne, who rented 7 McGill Rise for a year, told Daily Mail Australia.

She said her air conditioning didn’t work, the mould was so bad mushrooms grew out of it and there was no waterproofing in her roof.

The home’s cladding was so flimsy a hole was punched in it by building materials from other sites in the street being left out in the wind.

‘The lack of sleep wasn’t great either, we would honestly lay awake at night wondering if it was safe to be there,’ she said.

‘There were 73 electrical faults and the toilet leaked continuously. No matter how many times I had the plumber back it would leak right out on the carpet,’ she said. 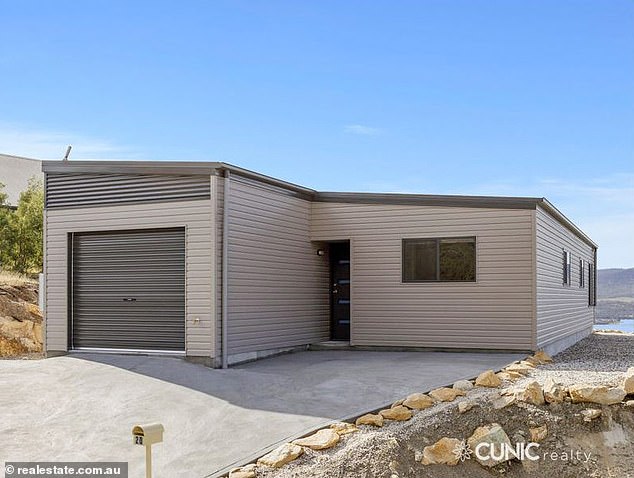 A home from McGill Rise, Claremont – a street which has seen eight homes evacuated over fears the supporting embankments could collapse

One man, who posted about McGill Rise in a Facebook thread on Monday, claimed his daughter lost $2,000 bond because of mould and ‘you couldn’t even touch the taps without getting an electric shock’.

Ms Browne also claimed the frame for the house across the road ‘fell down because they hadn’t put the walls up’.

‘I’m not a builder nor is my wife but it’s obvious that the frame work is/should be the solid foundation, not the walls,’ she said.

‘I find it disgusting that there is currently one of these properties for sale.

‘I would tell anyone not to go near these properties, I wouldn’t even buy or rent the properties surrounding them.’

The home in question currently for sale in McGill Rise is listed by PRD with the heading, ‘Claremont – A Little Bit Steep but INCREDIBLY Cheap!’

‘It’s certainly left us questioning if building a home is a safe and secure option because how do you really know what you are buying?’ said Ms Browne, who moved to a family property at Moonah. 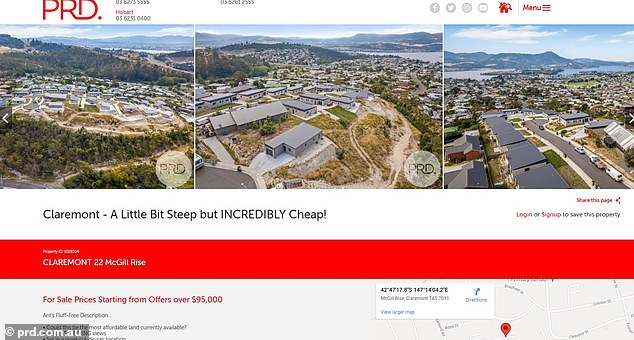 A current advertisement for a home in McGill Rise, Claremont, Tasmania 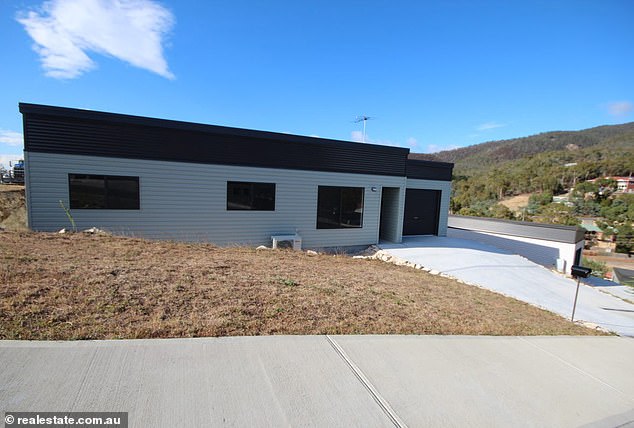 One of the homes on McGill Rise, at Claremont in Tasmania, which have been criticised by tenants for poor construction and by neighbours for the unsafe methods used on the supporting embankments

Glenorchy council explained it had the site geologically evaluated, as is required by law, and it was judged to be very low risk.

Due to changed to the Building Act in 2004, building site inspections are done by private certifiers, whose reports councils use to issue building approval.

‘In the case of McGill Rise, council received all of the necessary certificates from the building practitioners,’ the council said.

‘We now suspect that some of those certificates were issued when they should not have been, however this is a matter for the Consumer, Building and Occupational Services (Tasmania’s building regulator) to determine.

‘The audit found that the building surveyor engaged by the developer did not provide adequate documentation to demonstrate the stability of building platforms for the construction methods that were used.’ 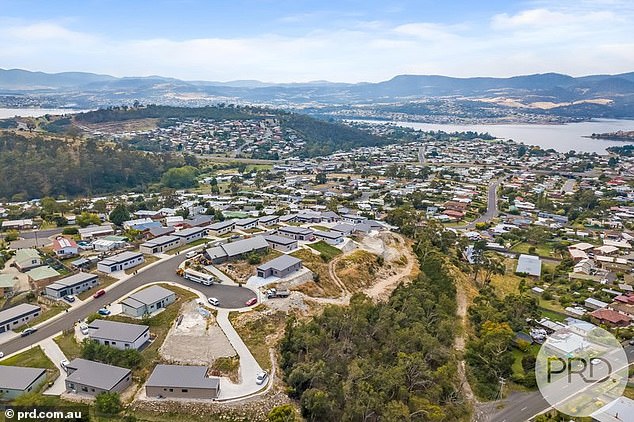 Former tenants from McGill Rise complained of multiple problems with the quality of building work in the homes, which sit elevated above the street below. After an audit eight of the homes were evacuated over safety concerns that the embankments could become unstable after heavy rain

The issue of private building certifiers giving questionable certifications was brought to the fore by the Opal and Mascot towers developments in Sydney in the past two years.

Both were evacuated when serious cracks were detected in the main walls, and many units are still uninhabitable with owners facing enormous repair bills.

Glenorchy council said the houses would stay vacant until full engineering assessments can be carried out and any necessary repair works were completed.

‘CBOS has also completed a subsequent audit of all McGill Rise properties to identify non-compliance with the National Construction Code and the Building Act 2016 and how any non-compliant work or processes might cause risk to owners, occupants and the general public,’ it said.

‘Where non-compliances with the National Construction Code have been identified, council has taken the necessary enforcement actions and will work with property owners to resolve.’