The father of ten babies said to have been born to one mother in South Africa has asked the public to stop donating money to his partner.

Teboho Tsotetsi – whose wife Gosiame Sithole made headlines when it was claimed she gave birth to decuplets – also said that he has still not yet been allowed to see the babies, as mystery continues to surround the potentially record-breaking brood.

‘I appreciate the financial support that we have been getting from members of the public, but I also would like to appeal to the public to stop making money deposits into our accounts until members of the community have seen the babies,’ Tsotetsi said in a message, according to Pretoria News.

But according to South Africa’s Sunday Times newspaper, the Mediclinic Medforum Hospital in Pretori – where Ms Sithole, 37, is claimed to have told her husband she gave birth to the babies after midnight on June 8 – said it had not treated her.

While the clinic said it was aware of the publicity around the birth of the babies, spokesperson Tertia Kruger told the newspaper following the Pretoria News report on Monday: ‘We can confirm that none of our facilities were involved in the obstetric care of this patient or her decuplets.’

Mr Tsotetsi is also quoted in the Pretoria News story as saying that Ms Sithole had been moved to the Steve Biko Academic Hospital on Friday, but the Sunday Times reported that Gauteng health and provincial authorities were unable to trace her at any of their public or private health facilities.

The father has said that he is yet to see the babies himself due to safety concerns over the coronavirus, and that he has not seen his wife since she left home on June 7.

Meanwhile, Mr Tsotetsi flew to Cape Town on Wednesday to accept a £50,000 donation for the children’s care while insisting the world will get to see them ‘at the right time’ – as doubt remains over the authenticity of the birth. 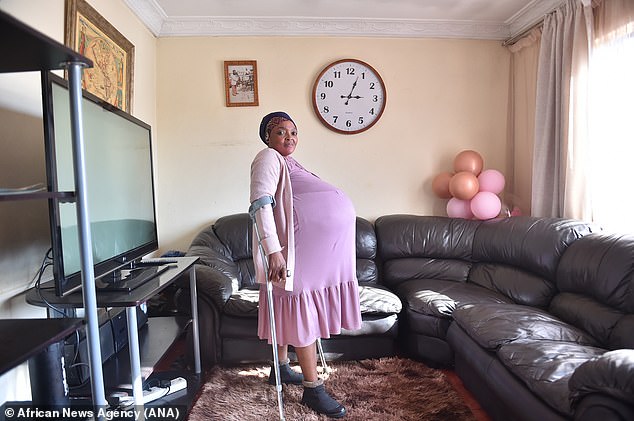 Gosiame Sithole, 37, claims to have given birth to ten children in South Africa on Monday (pictured at home ahead of the ‘delivery’)

Tsotetsi claims his wife gave birth to decuplets – seven boys and three girls – after a ‘natural’ 29-week pregnancy, even though such births are almost always the result of fertility treatments.

Since then a number of relatives have come forward to insist that the birth is genuine, even as local officials say they have no record of the delivery taking place at any hospital in Guateng state, where Pretoria is located.

No doctor has yet come forward to verify the delivery and no pictures of the infants have been published – ostensibly for cultural and religious reasons.

If the birth is confirmed as genuine, it would be a world record – coming just a month after a Malian woman, Halima Cisse, gave birth to nine children in Morocco.

Last week, the infant’s aunt claimed that the ten babies were fighting for their lives at a hospital in South Africa.

The aunt, who has not been publicly identified, said Ms Sithole is also recovering in the same Pretoria hospital after giving birth to five of the children naturally and another five by Caesarean section on Monday.

‘[The babies] are still in incubators fighting for their lives. They came at 29 weeks; the mother is still weak… This is a sensitive issue,’ the woman told TimesLIVE. 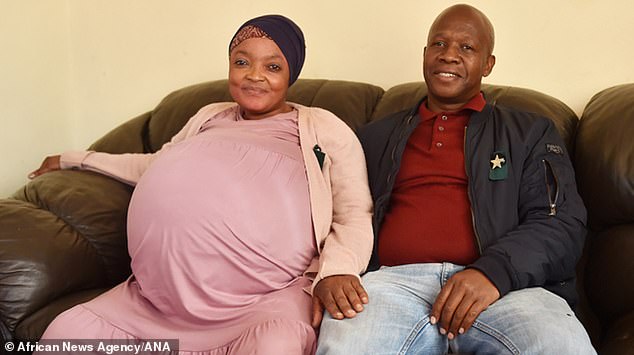 Father Tebogo Tsotetsi (right), who broke the news to journalists, said the world will get to see them ‘at the right time’ as doubt remains over whether it is genuine

Tsotetsi told Pretoria News last week  ‘They are premature, they are still incubated. Very small as you can think – 10 children in one womb that normally carries one baby.

‘They are very small, so the sensitivity that goes into that, even the doctors, they don’t want to risk that.’

He added that five babies were born naturally and another five were delivered by c-section, saying a team of six doctors, two gynecologists and two nurses helped.

Tsotetsi said his wife was exhausted after the birth, but that she had managed to get out of bed and take a short walk on Wednesday.

‘She is doing very well.’ he added.

Tsotetsi was the first to break the news of the apparent birth to reporters last Monday, telling the Pretoria News that his wife had given birth to seven boys and three girls.

The news quickly spread around the world, followed by a scramble for official information on the pregnancy and birth that has so-far proved elusive.

South African media have been at loggerheads over the story, with some outlets rushing to confirm the news while others quickly derided it.

To date, no definitive account of the pregnancy or birth has been published.

Government officials have gone so far as to confirm they are aware of the case and have been in contact with the family before, after Sithole gave birth to twins in 2016.

But Feziwe Ndwayana, a spokesman for the Department of Social Development, said yesterday that she cannot confirm the birth of 10 children because nobody has been in contact with Sithole recently.

Ms Ndwayana added that a social worker was to be sent to the family home last week to try and confirm the authenticity of the delivery. 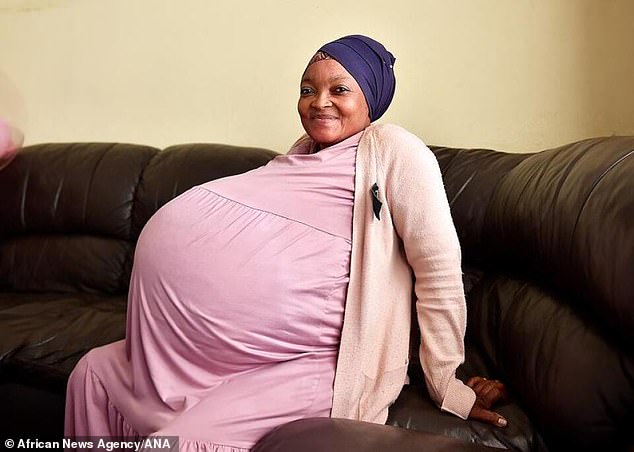 If Sithole’s delivery is confirmed, it would make it the world’s largest – coming just a month after a Malian woman gave birth to nine children in Morocco

Pretoria News claims to have been in touch with the family for months over the pregnancy, but held on to the story until after the birth.

The newspaper claims it is not publishing all the details it has about the delivery because of ‘cultural and religious reasons’.

Alongside news of the birth, which first appeared in Tuesday’s paper, the outlet also ran an interview with Sithole and Totetsi that they said was conducted several months ago.

At the time, Sithole believed she was pregnant with eight children – having initially been told she was carrying six before two more were discovered on a later scan.

It was only during the birth itself that the remaining two children were discovered, according to the newspaper.

Sithole said she suffered through the complicated pregnancy, experiencing morning sickness early on followed later by pain in her leg.

Meanwhile Tsotetsi revealed that he initially could not believe his wife with pregnant with six children, thinking it was medically impossible.

‘But after I found out that these things do happen, and saw my wife’s medical records, I got excited. I can’t wait to have them in my arms,’ he said at the time.

The condition of the children following the birth was not made clear by Pretoria News, which was the first to report the case.

Children of such extreme multiple pregnancies are almost always born under-weight and can often be malnourished as the mother’s body struggles to provide nutrients for so many infants. 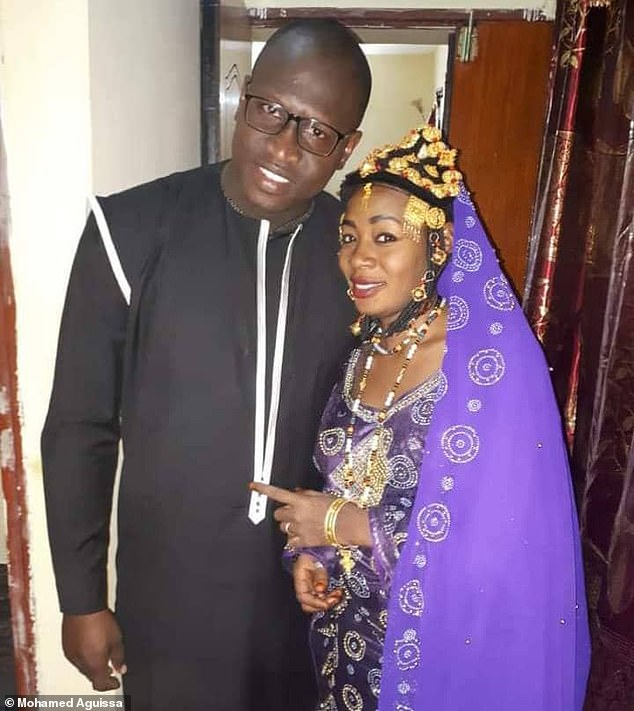 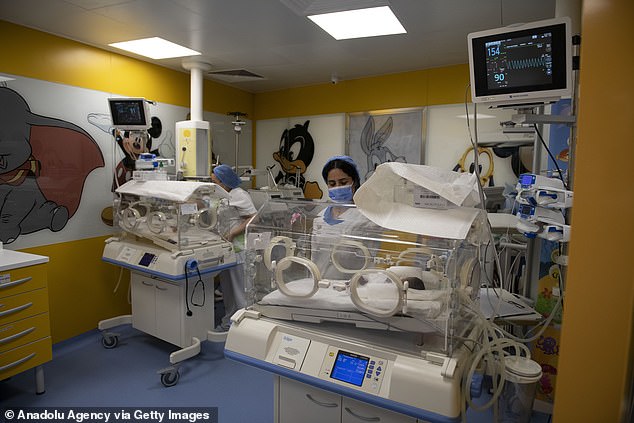 Cisse, 25, from Timbuktu, was taken to hospital in the Malian capital of Bamako in March to be kept under observation before being flown to Morocco to be cared for at a specialist hospital after the country’s president intervened.

The children – five girls and four boys – were then delivered by a team of 10 doctors and 25 nurses via Caesarean on May 4, in a complicated operation that almost caused Cisse to die of blood loss.

Doctors later revealed the babies were born significantly underweight and had ‘deficiencies in everything’, but are now in a stable condition.

As of last week, the children were still being cared for around the clock in Morocco with doctors saying their weight has increased significantly.

But medics said they will still need to be kept under observation for at least another six weeks before they can consider sending them home.

Cisse is thought to be staying nearby after coming out of intensive care, where she was recovering from a ruptured artery during the birth.

Ms Cisse’s pregnancy was just the third reported instance of nonuplets in history.

The first recorded case of nonuplets came in Sydney in the 1970s, although sadly none of the babies survived, according to The Independent.

In March 1999, a set of nonuplets was born in Malaysia to a woman named Zurina Mat Saad, though none of them survived for more than six hours.

In January 2009, Nadya Suleman – dubbed Octomum – gave birth to octuplets including six boys and two girls at a hospital in California.

All survived the birth, and recently celebrated their 12th birthdays.

The babies were a result of IVF treatment, and were nine weeks premature when they were delivered via c-section.

HOW CAN A WOMAN GIVE BIRTH TO TEN BABIES?

Women giving birth to multiple children is not uncommon, with cases of twins and triplets occurring relatively frequently with no scientific intervention.

But high-order multiple pregnancies – four children and above – are extremely rare naturally, and almost always occur as a result of fertility treatment.

That is because such treatment  – which includes IVF – is expensive and the chances of success are relatively slim.

This incentivises some unscrupulous medics to implant large numbers of fertilized eggs into a woman’s womb to further increase the chances that one will develop.

But in rare cases several of the embryos – or all of them – will start developing into foetuses, creating extreme cases of multiple pregnancy. 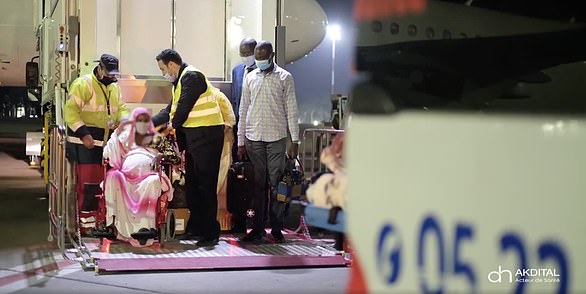 Halima Cisse, 25, from Timbuktu, spent two weeks in hospital in the Malian capital of Bamako before being flown to Morocco in March to give birth in a specialist hospital via cesarean section. Pictured: Ms Cisse arrives in Morocco

In theory there is no limit to how many children a woman can carry at once, though risks to the health of both mother and babies increases with each additional child.

Women with extreme multiple pregnancies are more likely to develop anaemia – a lack of iron in the blood that can damage the immune system and make other complications worse.

Cases of pre-eclampsia – a condition that can cause severe headaches and potentially-deadly fits – and gestational diabetes – high blood sugar that has been linked to post-natal depression – also increase in such cases.

Babies born of high-order multiple pregnancies are almost always delivered early, and tend to be both under-weight and malnourished.

Cases of infant mortality in the days and weeks after birth are also not uncommon. 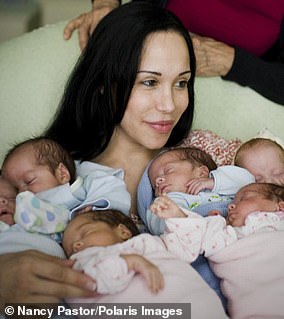 Nadya Suleman, or ‘Octomom’ made headlines in the United States on January 26, 2009, when she gave birth to six boys and two girls in California.

The largest set of babies to be born in one go and to survive past infancy is eight – born to ‘Octomum’ Natalie Suleman in California in 2009.

Ms Suleman, who already had six children through IVF, had 12 embryos leftover. Her doctor implanted all of them inside her womb at once.

Her case sparked a fierce debate over IVF regulation, with the fertility specialist who carried out the procedure stripped of his medical licence.

Nine children were also born to Halima Cisse – a Malian woman – at a hospital in Morocco last month, where they remain under constant care.

While all five girls and four boys are said to be ‘doing fine’ and putting on weight, doctors say it will be at least another six weeks before they can consider sending them home.

Cisse is also still recovering from a torn artery she suffered during the birth, which almost caused her to bleed to death.