Moment U.S. Border Patrol agents detain more than 100 migrants who were held by smugglers at a squalid ‘stash house’ in Texas

More than 100 migrants who were found inside a stash house operated by smugglers in Texas, according to U.S. Customs and Border Protection.

The undocumented individuals were identified as natives of Guatemala, El Salvador, Honduras, Nicaragua, Ecuador and Mexico.

Video footage released by the U.S. Border Patrol Laredo Sector showed migrants sitting in a group outside the home while others were being patted down and questioned by the agents on site.

CBP did not say if any smugglers were apprehended during the sting. 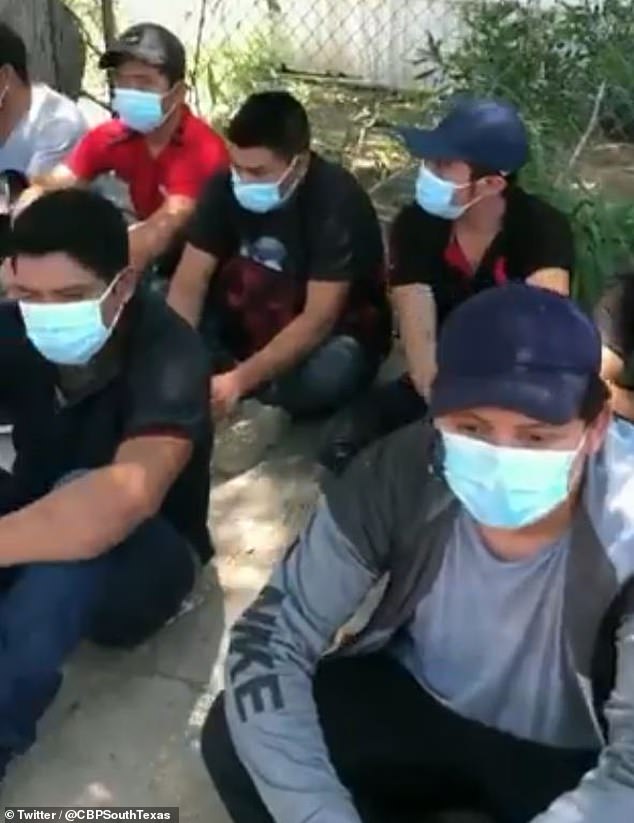 Pictured are some of the 100 migrants who were detained last Thursday when Laredo Sector Border Patrol agents, Homeland Security Investigations and the Laredo Police Department raided a stash house used by smugglers to hold the border crossers 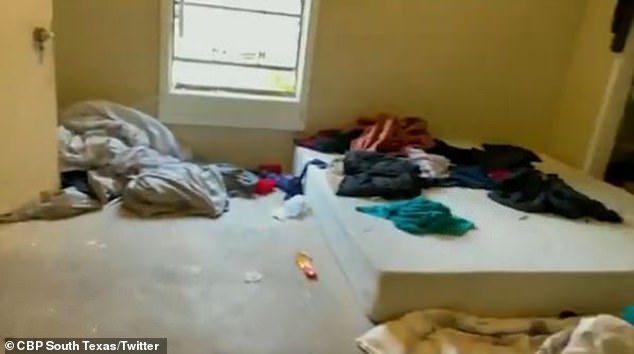 One of the four bedrooms at a home in Laredo, Texas, where more than 100 undocumented migrants found last Thursday. The individuals being held there by smugglers as part of the process of being ferried through the United States-Mexico 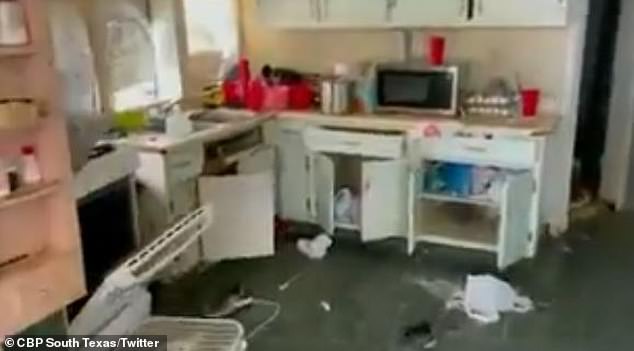 Kitchen area inside a multi-room residence in south Laredo, Texas, where more than 100 migrants were found by a team of law enforcement officers led by U.S. Border Patrol. The individuals were identified as natives Guatemala, El Salvador, Honduras, Nicaragua, Ecuador and Mexico

As part of the process of being ferried illegally across the United States-Mexico border, the migrants slept on mattresses and on the floors of at least four bedrooms and the living room during their stay at the stash house.

They are then moved into cities to start their new lives in the US.

All of the migrants were taken into custody and provided medical care – U.S. Customs and Border Protection said. The investigation is still ongoing. 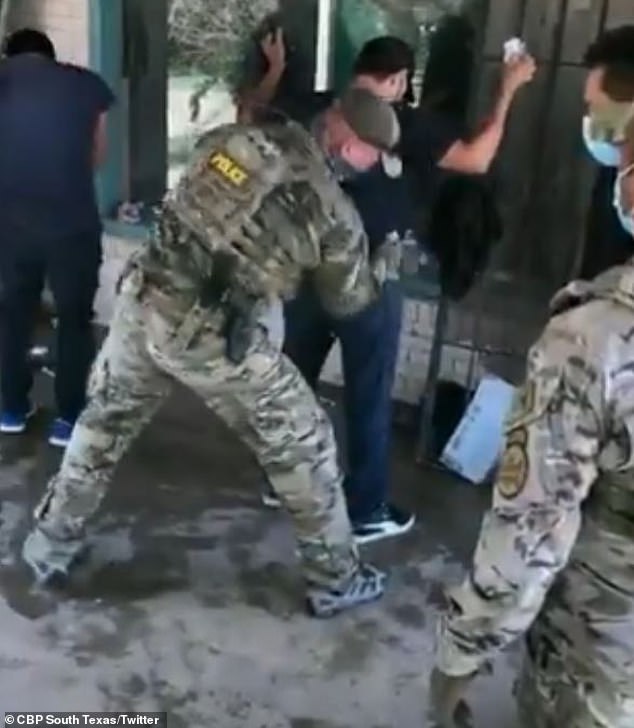 A U.S. Border Patrol agent checks a male migrant who was among more than 100 undocumented individuals found inside a house in Laredo, Texas, last Thursday 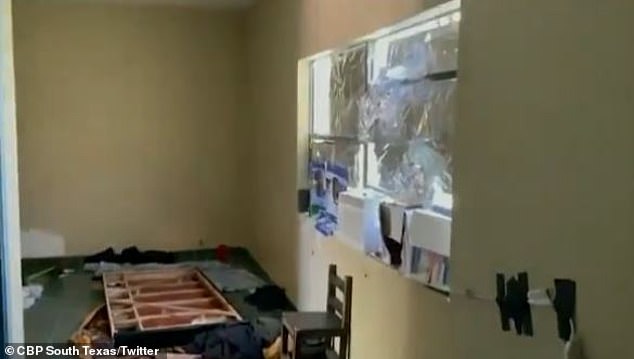 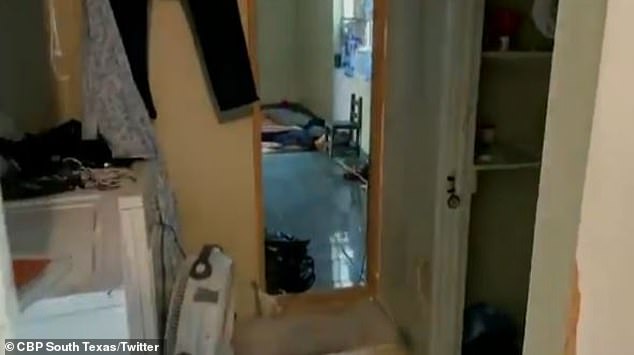 Thursday’s stash house bust was among a string of raids that U.S. Border Patrol Laredo Sector agents led last week throughout several neighborhoods in Laredo – a border town with a population of some 260,000 residents

‘The smuggling and housing of large groups of individuals in stash houses has not been deterred by the ongoing COVID-19 pandemic,’ CBP said. ‘Stash house incidents such as this pose a threat not only to the people exploited by human smuggling but also to the people and safety of our Nation.’

The stash house bust was among a string of raids that U.S. Border Patrol Laredo Sector agents led last week throughout several neighborhoods in Laredo – a border town with a population of some 260,000 residents.

A total of 216 migrants were apprehended during searches at five homes last Monday and Tuesday. 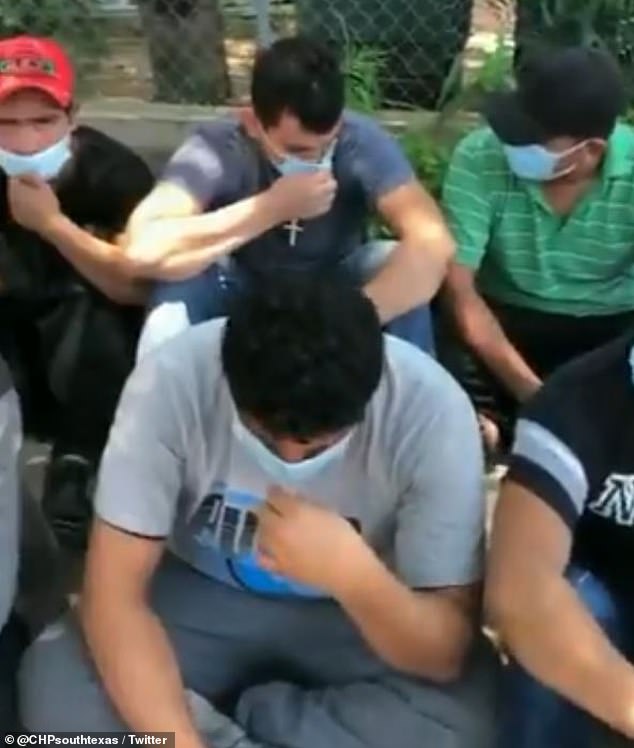 The arrests of undocumented migrants at stash houses in Laredo has skyrocketed in the last year.

Data provided by the Laredo Sector Border Patrol to DailyMail.com showed that 3,998 migrants were arrested at 189 stash houses from October 1, 2020 until June 9.

In comparison, the sector took just 464 migrants into custody after raiding 46 homes in the whole year between October 1, 2019 and September 31, 2020.

A new monthly report released by CBP on Wednesday showed that Border Patrol agents stopped 180,034 migrants in May, a slight increase from 178,854 the prior month, with the increase driven largely by single adults.

Laredo Sector border officers saw encounters with migrant individuals spike from 10,926 in April to 76,670 in May.