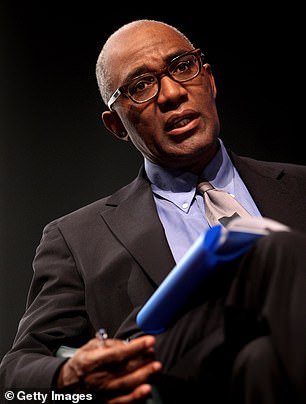 Trevor Phillips said he accepted that ‘race matters’ in Britain, but added: ‘In truth it is what we call ”class” that presents the biggest barrier to ambition and talent’

Trevor Phillips today urged Britons to stop importing America’s culture war over race, calling it a ‘desperate mistake’ and arguing that class is more important than racial background in causing inequalities in society.

The former head of the Commission for Racial Equality accepted that ‘race matters’ in Britain, but added: ‘In truth it is what we call ”class” that presents the biggest barrier to ambition and talent.’

He called for UK activists to stop adopting the language of America’s tortured racial politics, writing: ‘We have deep enough divisions in our own country without shoehorning someone else’s conflicts into our daily lives.’

In a comment piece in The Times, Mr Phillips, 67, who parents live in America, said he was pleased yesterday’s England game saw applause drowning out boos when footballers took the knee, adding that he ‘admired’ the players’ actions.

But he asked if the gesture, which began in America to protest police homicides – rare in the UK – might have been ‘more moving’ if it had been directed at showing sympathy for Sasha Johnson, the BLM activist currently in a critical state in hospital after being shot in the head after wandering ‘unwittingly into a gunfight between young black men’.

And Mr Phillips said that the ‘more significant’ question was why men such as Marcus Rashford and Phil Foden, who are ‘articulate and thoughtful’ but from working class families, still found that their most likely route to success was through playing sport.

He pointed to recent comments by the chairman of the Social Mobility Foundation, Alan Milburn, who last week found that coming from a less affluent background dramatically reduced your chances of becoming a senior lawyer or doctor.

He urged the government to begin ask more questions about people’s background, rather than just race, to gain a more detailed picture of the barriers faced by working class children. 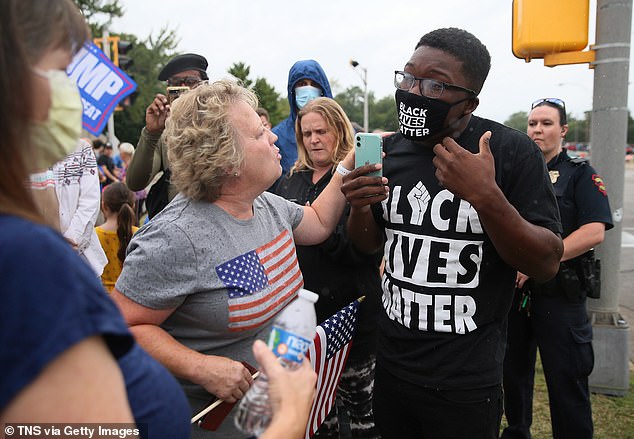 He called for UK activists to stop adopting the language of America’s tortured racial politics. Pictured are BLM activists facing off against Trump supporters in 2020

Mr Phillips continued: ‘In the US they worry about income and race. In Britain, where wealth stored in a family home guarantees security and allows risk taking, we should frame a different question.

‘I would ask how long the family had owned its home, and its value. Either way, no government has yet put this into effect.’

Mr Phillips’ comments are supported by the findings of the government’s Commission on Race and Ethnic Disparities, which found that ‘geography, family influence, socio-economic background, culture and religion have more significant impact on life chances than the existence of racism’.

The report – criticised as an ‘insult’, ‘whitewash’ and ‘disgraceful sham’ by Labour MPs – said in terms of overall numbers white boys from low income families were the most disadvantaged.

It also hit out at the ‘casual’ use of the term ‘institutional racism’, saying there was little evidence to support the claims.

As well as condemning barbs about ‘White Privilege’, the report said the term ‘racism’ was often ‘misapplied’ to ‘account for every observed disparity’ – suggesting that firms should ‘move away from’ unconscious bias training.

Chair Tony Sewell thanked the ‘mainly young people’ behind the BLM movement for putting the focus on race, but cautioned that progress cannot be achieved by ‘cleaving to a fatalistic account that insists nothing has changed’.

The document said ‘historic experience of racism still haunts the present’ and identified a ‘reluctance to acknowledge that the UK had become open and fairer’. 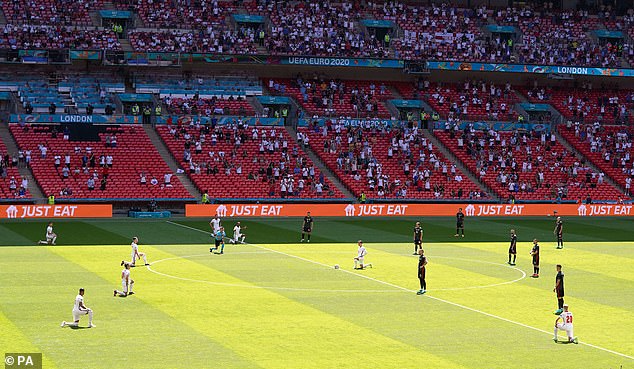 Mr Phillips, 67, who parents live in America, said he was pleased yesterday’s England game saw applause drowning out boos when footballers took the knee, adding that he ‘admired’ the players’ actions, but argued the more significant issue in the UK is class

At England’s game against Croatia yesterday, the vast majority of the 22,500 Three Lions inside Wembley applauded the players’ gesture of defiance against racism with cheers quickly drowning out the smattering of boos that came from the upper tier behind the goal on the west side of the stadium.

The FA had been concerned that fans booing their own players – as happened before warm-up matches against Austria and Romania – would dominate and create an unpleasant atmosphere at the start of England’s tournament.

The fans’ backing for the players vindicates the diplomatic work that has gone on behind the scenes this week with the FA lobbying the Government to condemn fans who booed. This backing eventually materialised on Friday and England manager Gareth Southgate implored supporters to get behind the team.

The FA had been sufficiently worried about the prospect of loud booing that they prepared a statement condemning it and reaffirming their commitment to campaigning for greater racial equality, but it was never released.