A Tory MP has been ordered to apologise on the floor of the House of Commons for bullying parliamentary staff as they tried to set up a virtual committee meeting.

A disciplinary panel imposed the sanction on Daniel Kawczynski this morning after a review heard he had called staff ‘useless’ and labelled one a member of ‘the snowflake generation’.

The Shrewsbury and Atcham MP was found to have acted in an ‘intimidatory and threatening manner’ towards staff as they failed to resolve technical difficulties which prevented him from attending the meeting.

Mr Kawczynski was found to have been ‘repeatedly rude, aggressive and impatient’ to two complainants and other staff.

The Independent Expert Panel which imposed the sanction was in ‘no doubt that the impact of the conduct in this case on the complainants was significant’.

Mr Kawczynski said that at the time of the incident he was under pressure from constituents because of Brexit and flooding issues and the panel heard his height, at 6’9″, made him ‘very conspicuous in the street’ and he often found himself ‘under repeated attack’. 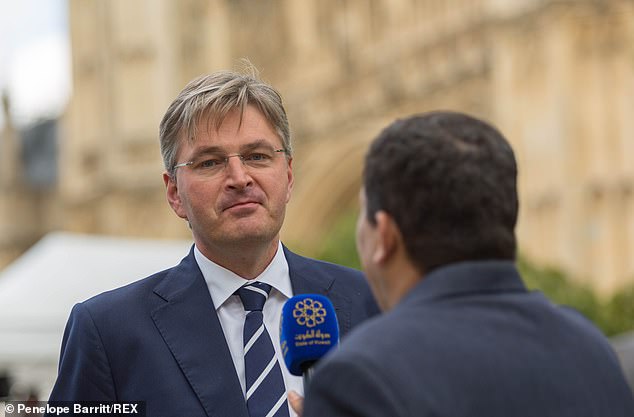 The complaints made against Mr Kawczynski related to his conduct on April 27, 2020, when he was unable to attend a virtual meeting of a parliamentary committee because of technical difficulties as Parliament was adapting to new remote working during the coronavirus lockdown.

Two complainants and other staff had been unable to resolve the problems, prompting criticism from Mr Kawczynski.

The MP ‘did not shout or swear’ at the staff members ‘but the force and aggression he displayed were found to constitute bullying’ and he was ‘repeatedly aggressive, rude and impatient in these phone calls’.

It was alleged by the complainants that he had breached Parliament’s Bullying and Harassment Policy before, during and after the meeting.

The panel said it was the ‘vehemence and repetition’ of the MP’s statements which prompted the complaint to be made.

The Parliamentary Commissioner for Standards found the Conservative backbencher ‘had acted in an intimidatory and threatening manner towards the Complainants and that he had abused his power as a Member of Parliament by making exaggerated and malicious claims’.

Mr Kawczynski did not appeal the Commissioner’s decision. A sub-panel of the Independent Expert Panel was then appointed to determine the MP’s punishment.

It determined that an apology in the form of a personal statement on the floor of the House of Commons should be imposed, prompting Mr Kawczynski to appeal.

But a second sub-panel has rejected the MP’s appeal and ‘determined that the sanction was proper and proportionate’.

Mr Kawczynski said that he had been under great pressure in his constituency at the time of the incident because of Brexit and serious flooding.

The panel said: ‘He found himself under repeated attack by members of the public on both these grounds. He emphasised to us how such attacks could be extremely vicious.’

He sent an apology on May 4 last year to apologise for ‘any behaviour lacking in traditional patience and good manners towards your teams’.

The apology was not passed on to the complainants and the MP subsequently apologised to both in writing and expressed remorse.

However, the panel said the apology on May 4 ‘did not expressly accept any wrongdoing’ and ‘consequently, we conclude that some concerns remain as to the sincerity of the apologies given to date’.

Sir Stephen Irwin, chairman of the IEP said: ‘We accept that the circumstances which arose on 27 April 2020 were difficult. But they were difficult for everyone.

‘Whilst we fully grasp that the life of an MP can be highly pressurised, these responsibilities and stresses do not justify a loss of courtesy, an exaggerated sense of importance or entitlement, or bullying.

‘Our conclusion is that the determination of a requirement to make a public apology on the floor of the House is proper and proportionate.’