This is the moment police were forced to smash their way into a car to rescue two dogs who had been left in sweltering heat only for their owner to complain about the damage.

Officers said the dogs looked instantly relieved when they had fresh air and water after the rescue on Brighton seafront on Saturday, where temperatures reached 75F (24C).

Video shows one officer using his baton to smash the back window of the black vehicle as the owners rushed back to the scene in horror. 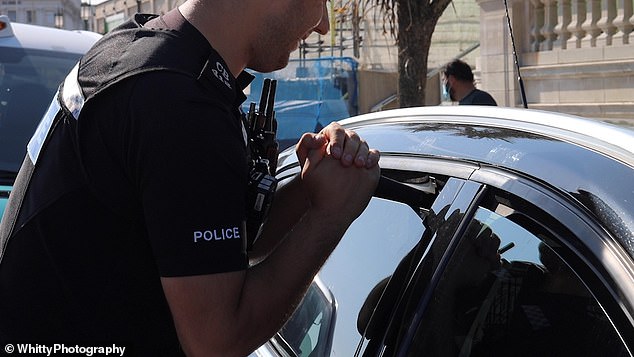 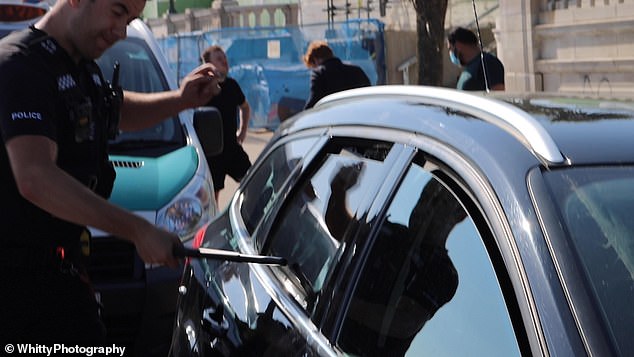 One woman can be heard saying ‘you broke my window out’ as the car alarm goes off.

Another officer can be heard responding to the woman, saying: ‘It’s a hot day. You shouldn’t be leaving the dog in the car in this weather.’

A crowd of beach-goers gathered to watch the dramatic rescue unfold on Brighton seafront.

One witness told MailOnline: ‘The police were called by a member of the public who noticed the dog in the car.

‘The police attempted to contact the owner of the vehicle but they failed. This is when they attempted forceful entry to stop the risk to the pups from the heat.

‘First the PC attempted to use his baton but this failed. Then he used a glass punch four times and the window smashed. 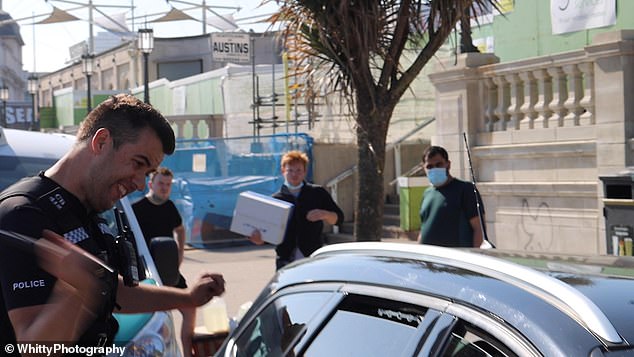 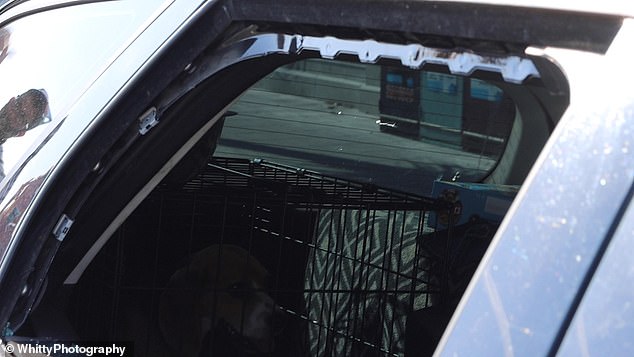 What should you do if you see a dog in a car during hot weather?

The RSPCA says you should try and establish if the dog is showing any signs of heatstroke such as heavy panting or drooling.

Other signs of heatstroke include lethargy and vomiting.

If the dog is showing signs of heatstroke, the charity says dial 999 immediately.

If police are unavailable and the situation becomes critical, you must be careful before taking the decision to smash the window as this could be considered criminal damage and you may have to defend your actions in court.

Make sure you tell the police what you intent to do and why.

Take pictures or videos of the dog and the names and numbers of witnesses to the incident.

‘Then he used the baton to remove the window. I think the driver had some tint film in the window so it smashed but stayed in the same place.

‘A member of the public then gave the PC some water for the dogs (who never left the car).

‘The owner came back clearly agitated with their window being smashed and because there was a crowd.’

Another witness said the owners appeared unaware of the dangers posed to animals left in hot vehicles.

The witness, who said the dogs were ‘panting solidly’ told the Sun: ‘Where they had parked there is just no shade.

‘The bloke obviously thought he was completely in the right. He didn’t really seem to have much empathy.’

The RSPCA says that, despite the common belief it is sometimes OK if windows are open or the car is in shade, dogs should never be left alone in vehicles during hot weather.

The charity says a car can become as hot as an oven very quickly, even when it doesn’t feel that warm.

When it’s 22 degrees, in a car it can reach an unbearable 47 degrees within the hour and a dog in these conditions could be susceptible to heatstroke.

A spokesman for Sussex Police said: ‘We were called about two dogs left locked inside a car in the heat of the day yesterday on Madeira Drive, Brighton. 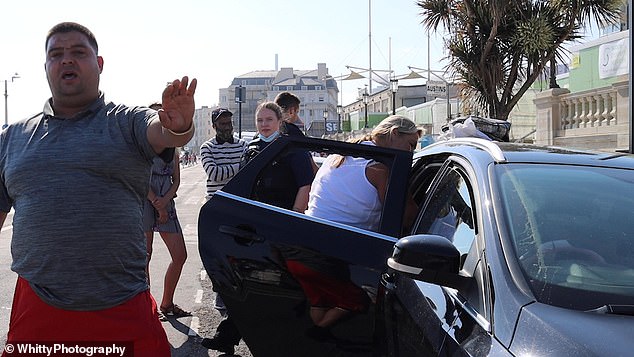 ‘Police officers attended and tried to get a contact number for the owners of the car but were unable.

‘Officers had no choice but to smash the side window to gain access and a kind member of the public donated a bottle of water.

‘The owners were given strong words of advice on returning to the car a short time later.

‘The dogs, who were much improved after fresh air and water, were left with the owners.

‘Dog owners should never leave a dog alone in a car on a warm day. If you see a dog in distress in a hot car, dial 999.’