They say you can’t teach an old dog new tricks. But that’s not the case for border collie Peggy.

Her life as a sheepdog appeared to be over when, at the age of nine, her hearing became so bad that she could no longer hear her owner.

But now, in a remarkable twist, Peggy is able to work again. That’s because has been taught a form of sign language.

After Peppy was signed over to the RSPCA, Chloe Shorten, from the Mid Norfolk and North Suffolk Branch, took her into her home.

The 28-year-old animal welfare manager instantly fell in love with the pooch. And she vowed to help Peggy get back to the job she loved.

Sheepdogs are traditionally trained to obey whistles or voice commands, with short, simple instructions such as ‘Away’, ‘Come-by’, and ‘Steady’.

But now, Peggy is thriving after learning to read hand signals and body language from Chloe and her husband Jason – who just so happens to work as a shepherd.

Chloe said: ‘We completely fell in love with Peggy almost immediately, and it soon became clear that she wouldn’t be going anywhere. 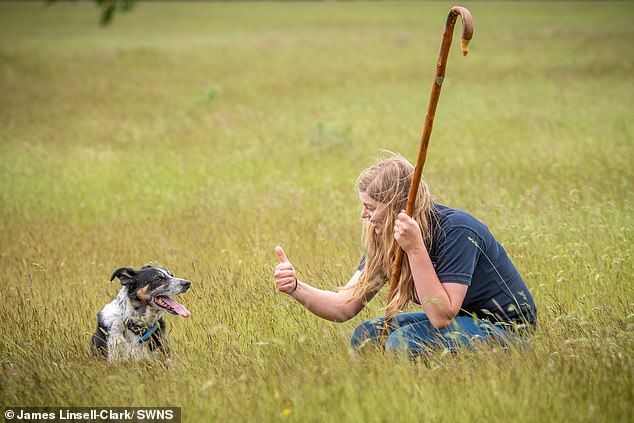 After being signed over to the RSPCA, Chloe Shorten, from the Mid Norfolk and North Suffolk Branch, took Peggy in. Pictured: Chloe and Peggy out in the field together 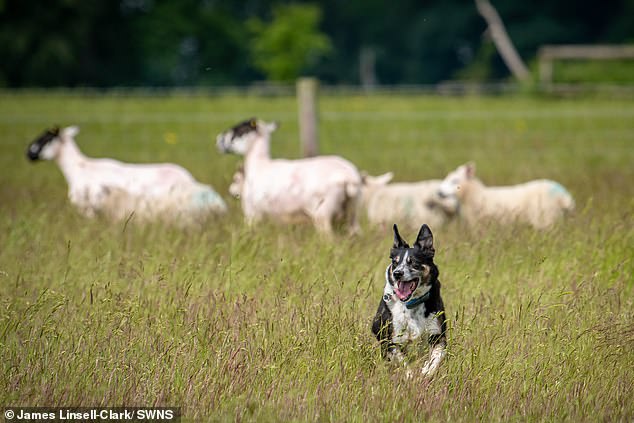 Peggy’s life as a sheepdog appeared to be over when, at the age of nine, her hearing became so bad that she could no longer hear her owner. But now, in a remarkable twist, Peggy is now back working in the field, because she has been taught sign language

‘We knew Peggy wanted to be working so we started the long process of teaching her how to herd and work with a shepherd without relying on voice commands.

‘We started by teaching her to look at us for hand signals.

‘We used repetitive and positive reinforcement and instead of pairing a verbal command with an action we’d use a physical hand gesture.

‘She reads our hand signals and body language as a way of telling what we’re asking for. For example, thumbs up means ‘good girl’.’

Now, Peggy has learned to watch Chloe and 34-year-old Jason closely for hand signals – and loves being set loose in the fields to help her owners at work.

The couple trained Peggy with the help of a sheepdog trainer in a safe and secure environment, and their other two working sheepdogs – Sid and Nora – helped too. 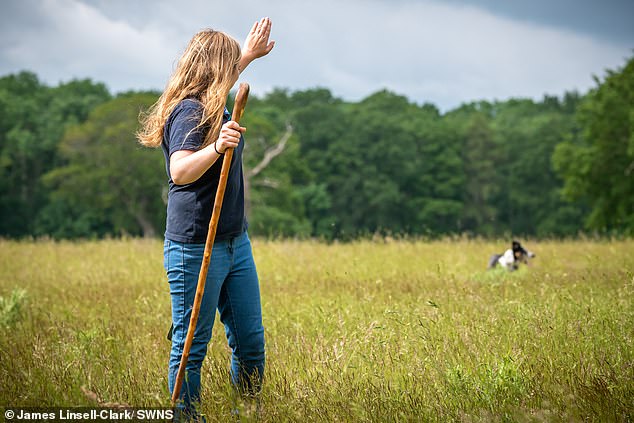 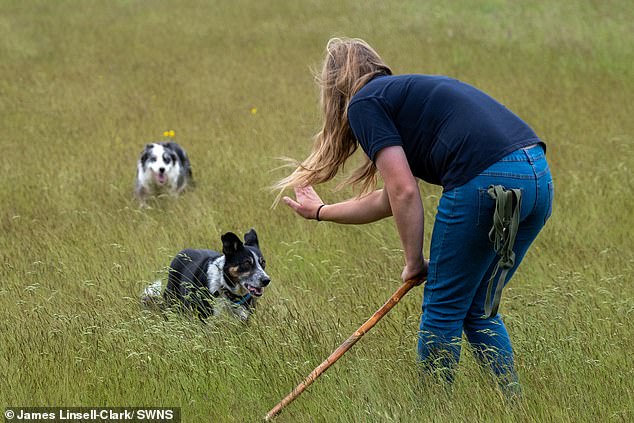 Chloe said it is not clear why the veteran sheepdog became deaf, as vet checks have revealed no obvious lumps or inflections in her ears – and her previous owners had ‘no idea’ why, either.

But the eager sheepdog has learned to recognise such gestures as a thumbs-up – meaning ‘good girl’ – and a flat, outstretched palm indicating for her to stop.

Chloe and Jason also sometimes point in a certain direction to indicate where they want Peggy to go, and will pat their knees to summon her back to them.

And to ask her to slow down, Chloe says she will make a similar, waving gesture as if slowing down a car.

‘The main thing for us was being able to tell her that she’s a good girl and reassure her she is going to be okay.

‘It took her a while to learn that we loved her and to gain her trust but it’s been so rewarding knowing that she now understands our praise. 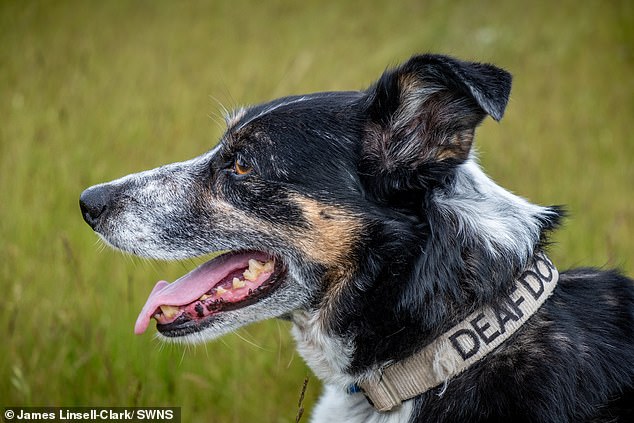 Chloe and Jason also sometimes point in a certain direction to indicate where they want Peggy to go, and will pat their knees to summon her back to them. Pictured: Peggy is now back in the field after learning sign language

‘It can be difficult with a deaf dog, because you have to wave at them to get their attention, and sometimes she doesn’t realise straight away.

‘But she’s such a happy little dog. She’s no spring chicken, and she is generally retired – but she loves going out to work with us and running around in the fields, helping out.

‘We don’t always take her out with us, just so as not to push her too hard. But I think if she had the chance she’d do it all the time.

‘She absolutely loves running around like a nutter so we have a GPS tracker on her collar just in case we get separated and she couldn’t see us, as she can’t hear us calling her.

‘But it’s amazing to see her with this new lease of life and enjoying her life with us.

‘She’s proof that you can teach an old dog new tricks, and is a wonderful example of the capability of a dog, even if they do lose a sense.’