A Sainsbury’s worker had said it is a ‘huge privilege’ to be given a British Empire Medal as part of the Queen’s Birthday Honours list.

James Beardwell, who has autism, was tasked with sanitising trolleys at Springfield’s Sainsbury’s in Chelmsford last year to keep shoppers feeling safe and in a good mood during the pandemic.

He appeared on This Morning today and told Holly Willoughby and Philip Scofield it had been ‘overwhelming’ for his hard work to have been acknowledged by the monarch, 95.

It comes as dozens of volunteers and frontline workers are honoured for their work during Covid by the Queen.

Viewers were touched by James’ story and said it was good to see ‘brilliant’ people like him being rewarded for their efforts. 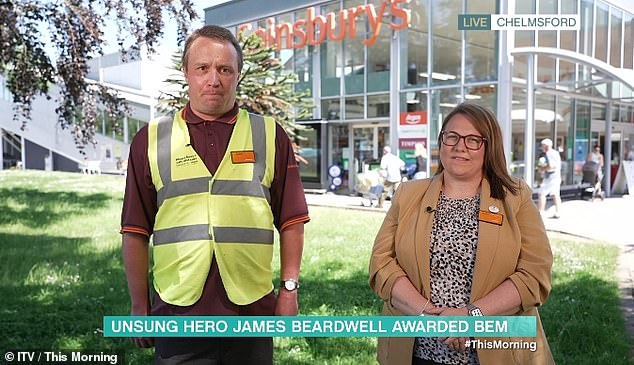 James Beardwell, left, was awarded an BEM on this year’s Queen Birthday Honours List for his work at Springfield’s Sainsbury’s in Chelmsford

Appearing on the programme today, James said: ‘It feels so overwhelming. It was a massive surprise.

He continued: ‘It’s been a massive honour to be on the Queen’s Birthday Honours List.’

Emma Sharman, who is Operations Manager at Sainsbury’s, nominated James for the recognition and appeared on the show with him. 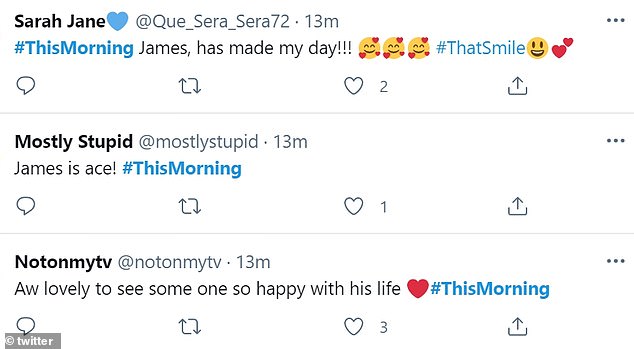 Members of the public can nominate people for awards, such as an OBE or an MBE.

These nominations go forward to an honours committee who decide whether someone is suitable for an award and in which category.

The British Empire Medal (BEM) Awarded for a ‘hands-on’ service to the local community. 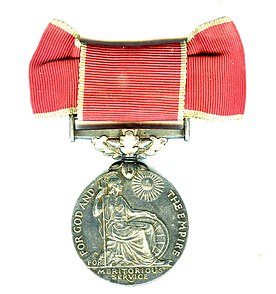 The British Empire Medal, pictured, is awarded for ‘hands-on’ service to the local community

This could be a long-term charitable or voluntary activity, or innovative work of a relatively short duration (3 to 4 years) that has made a significant difference.

She said: ‘James obviously suffers with autism, so this pandemic has been difficult enough for everyone to change the way we live our lives, but for James, he has overcome all of his own anxieties to come into the store everyday to make sure our shoppers had the best experience that they could.

‘And he did do that but he also used his own experiences to create so much positivity amongst our customers, our colleagues and all his social media followers.’

‘He’s just been such an inspiration to all of us so the recognition he got is so well-deserved, we’re all so proud of him.’

James revealed he wasn’t excepting to be on the list at all, saying: ‘It was a massive surprise and brought me so much joy because I worked very hard through the pandemic times.’

He added: ‘I’ve been working at Sainsbury’s very, very hard, especially through the national lockdowns.’

‘Since the beginning of March 2020, I’ve been working hard to sanitise the trolleys to keep everyone’s safe at this time.

‘I know it’s been difficult for everyone but I’ve done everything I can to bring positivity to the store as well.

‘It’s been fantastic. And I enjoy my new role on sanitising the trolleys to keep everyone safe.’

James said he had no preference on which member of the royal family would bestow him his medal, saying: ‘I’m looking forward to seeing the medal, it’s been a massive honour.

The supermarket worker said he had been an England football fan since watching England play Tunisian during the world cup of 1998.

James’ positivity spread to This Morning viewers who applauded his happy attitude, with one commenting: ‘James is fantastic, what a brilliant guy! A true asset to Sainsbury’s.’ 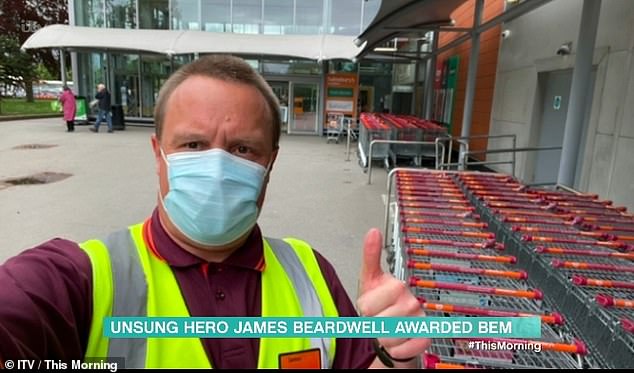 Another wrote: ‘What a great guy. This is what the honours system should be about. Not already well-paid luvvies and execs.’

‘James, has made my day,’ one wrote, while another said: James is ace.’

‘Aw lovely to see some one so happy with his life,’ a fourth wrote. 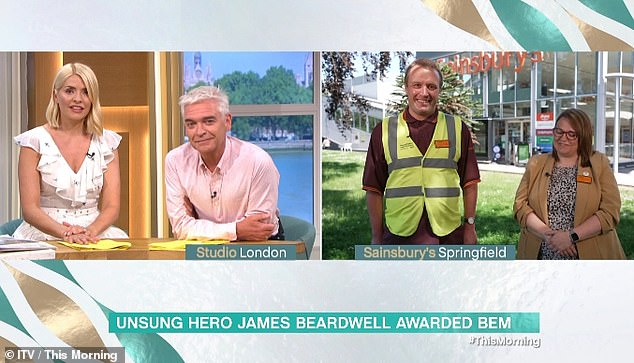 Emma Sharman, right, told Phil and Holly that she nominated James for the award because he had overcome his own anxieties to come to work everyday

Those who selflessly set up foodbanks, launched charities to help the vulnerable and made PPE for frontline NHS staff as the pandemic struck won recognition by the Queen this year amid the Covid-19 crisis.

The awards were announced last week as the number of adults in the country to receive at least one vaccine crept close to the 80 per cent mark.

Out of the 1,129 people honoured, 62 per cent were recognised for community work.

THE SIGNS AND SYMPTOMS OF AUTISM

According to the Centers for Disease Control and Prevention, people with autism have trouble with social, emotional and communication skills that usually develop before the age of three and last throughout a person’s life.

Specific signs of autism include: