Renting a home is now cheaper than buying one – in most parts of the Britain – for the first time in six years, a new report has today revealed.

The figures, which shine a spotlight on Covid’s colossal impact on the property market, reveal how Britons now spend an average of £1,054 a month on rent, compared to £1,125 on mortgage repayments.

It is the first time that renting has been less expensive than buying in the UK since December 2014, according to property and letting agents Hamptons.

Experts say rising house prices – sparked by the Government’s stamp duty holiday and first time buyers saving during the pandemic – and a drop in demand for people wanting to rent in cities – due to Covid-enforced work-from-home policies – are behind the change.

London has seen the largest shift since the start of the coronavirus pandemic, according to the report.

Falling rents there mean a buyer putting down a 10 per cent deposit on a property in the capital will have gone from being £123 per month better off buying in March 2020, to spending £251 per month less on rent in May 2021, the report said.

And this is much in line with the national picture. Last month the average private sector tenant in Britain spent £71 per month less in rent than if they were servicing the repayments on a 10 per cent deposit mortgage, according to Hamptons.

There are only four nations or regions where it is still cheaper to buy than rent – the North East, North West, Yorkshire and Humber, and Scotland, researchers found.

Meanwhile, MailOnline, through its own research, and also in conjunction with Zoopla, found direct examples where it is more cost effective to rent that it is to buy.

MailOnline even found similar properties just a street apart where it was almost £500 a month cheaper to rent that it is to buy. 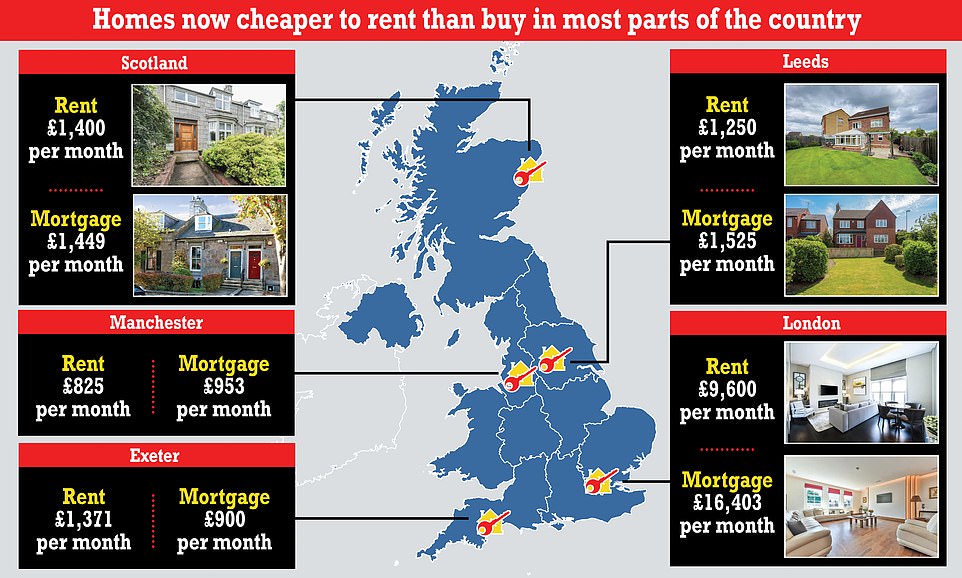 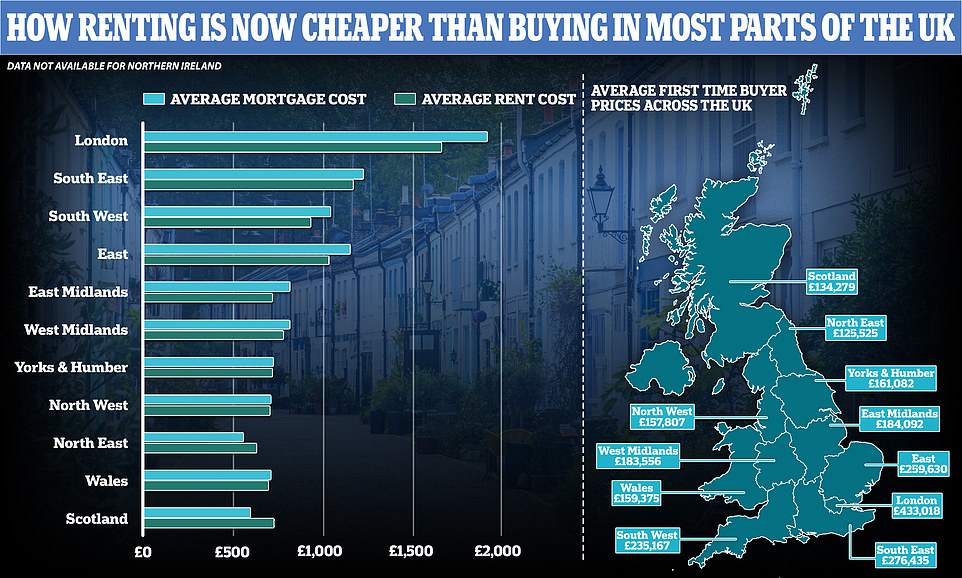 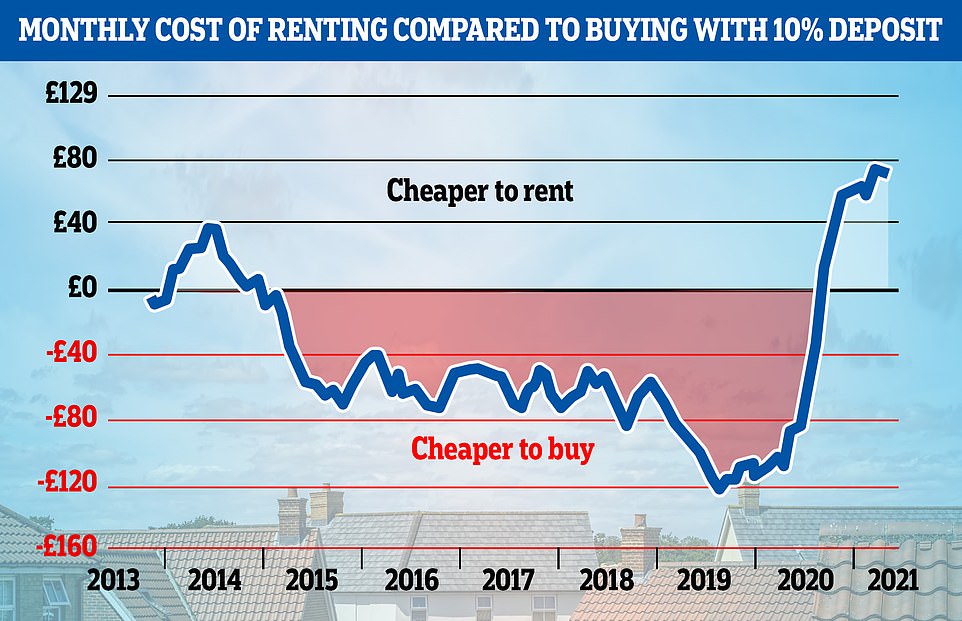 Turnaround: It has become cheaper to rent rather than buy a home in most parts of Britain 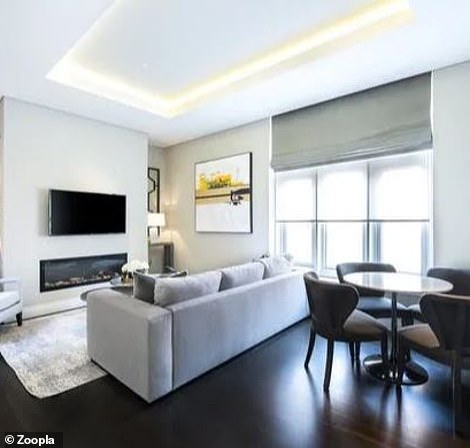 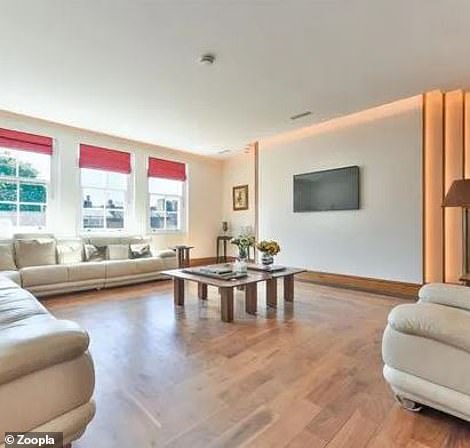 A stunning flat in upmarket Mayfair (pictured left), London, will set you back a staggering £9,100-per-month. But if you want to buy a flat in this property (pictured right) in the same street, you’ll be paying around £16,000-a-month for the mortgage 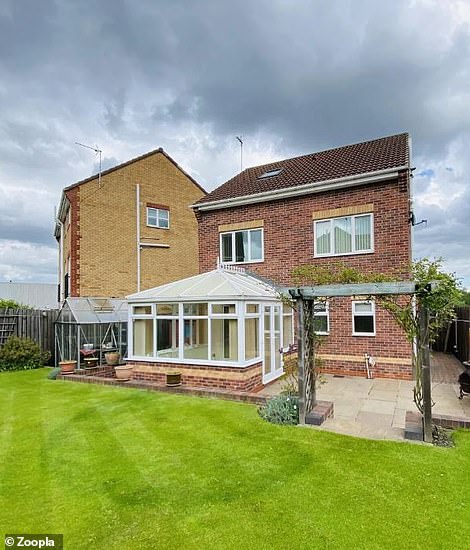 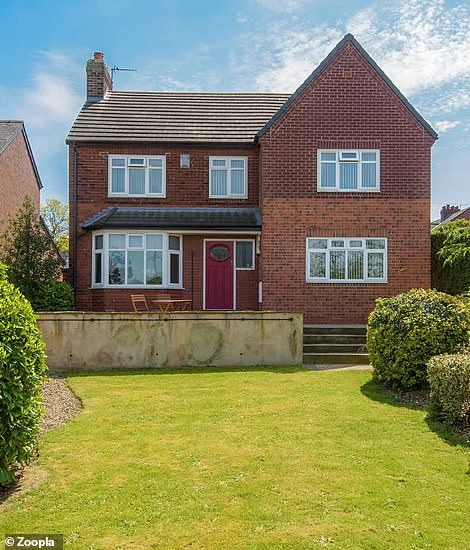 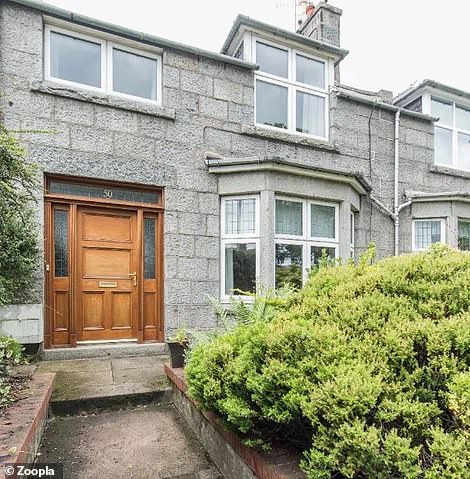 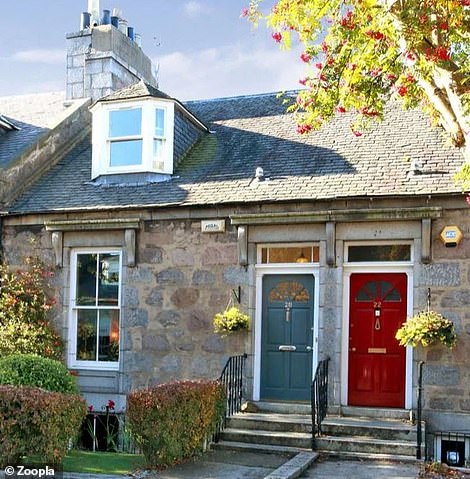 How much cheaper is it to rent than it is to buy in each area of the UK?

Yorkshire and the Humber – £5 more expensive

We then compared the rental price with an average mortgage cost – based on a 30-year mortgage of 90 per cent property value with a 3.9 per cent interest.

We found one two-bedroom flat in Holgate Avenue, Battersea, which was available to rent at £1,400-a-month.

In Exeter, in the south-west of England, we found a two-bed terrace home available to buy on Kimberley Road for £320,000 – meaning an average monthly mortgage cost of around £1,300-a-month.

Nearby, in Radford Road, a two-bed terrace home was available for £895-a-month.

Scotland, as described in the Hamptons report, did appear to buck the trend. MailOnline found a three bed semi-detached house in Bargany Place available for offers over £165,000 – an average monthly mortgage cost of around £710-a-month.

But a similar three bed semi-detached house in nearby Bargany Court cost £795-a-month.

Zoopla’s research meanwhile found two similar properties just a street apart in Manchester where a buyer would be spending around £930-a-month to pay for a mortgage, and £82 in rent.

Experts say strong house price growth has added to the cost of buying and owning a home. In early 2020 it was cheaper to buy than rent in every region or nation in Britain, Hamptons said.

However, rental prices are now seeing strong growth, after ‘bottoming out’ last May. Last month the average cost of a newly let rental home was 7.1 per cent higher than a year earlier. 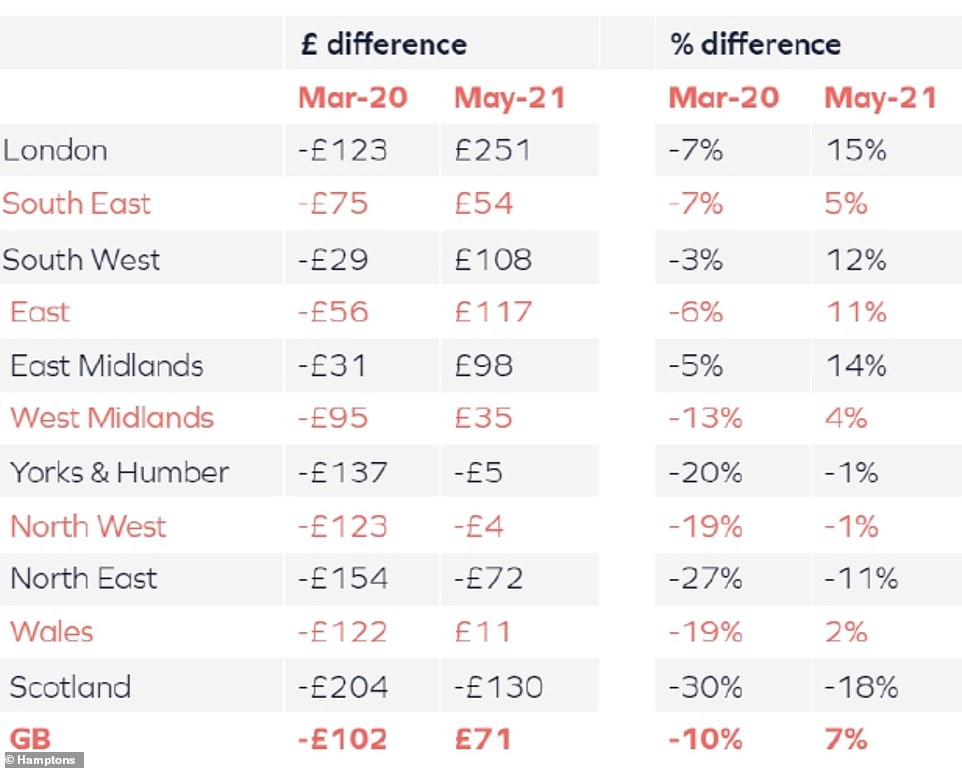 Costly: Monthly cost of buying relative to renting with a 10% deposit 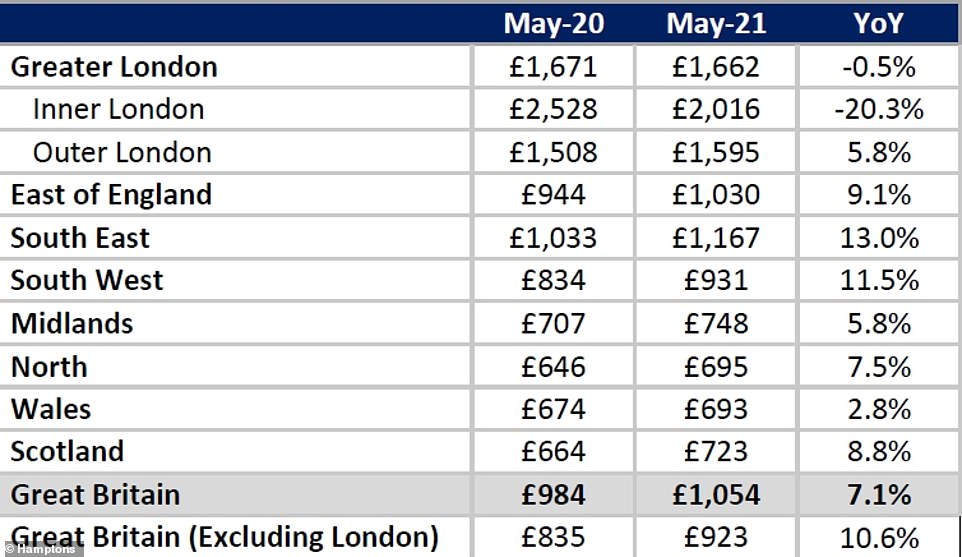 Rental costs: A table showing how much monthly rental costs have shifted in the past year

By Graham Norwood for This is Money

Somewhere in the latest blizzard of record high house price figures and the surge in sales triggered by the stamp duty holiday, one thing has been overlooked: the great North South divide is decreasing.

A home is still far more expensive in London than Middlesbrough, but the difference is diminishing.

For example, Zoopla says house prices in the capital rose a meagre 0.3 per cent in the past year, whereas in Middlesbrough they soared 10.06 per cent.

It’s not just prices. The time between listing a home for sale and a buyer’s offer being accepted in the North of England is now three weeks quicker than in 2019, while the areas boasting the fastest sales are Wigan, Barnsley and Burnley, claims Zoopla.

Again, contrast that with London, where homes now take two weeks longer to find a buyer than in 2019.

Nor is the trend likely to be a flash in the pan, with estate agency Savills forecasting that the North-West and Yorkshire and the Humber will lead UK house price growth with rises of 6.0 per cent in 2022 and 5.5 per cent in 2023.

And by the end of 2025, Savills predicts the North West will enjoy an eye-watering 28.8 per cent rise overall.

Across the UK, the average increase is set to be 21.1 per cent, while London stubbornly stays in the slow lane with only 12.6 per cent growth.

‘Some of the price rises we have seen were overdue; country prices had lagged well behind London for years and some re-balancing was required,’ says James Greenwood, managing director of the Stacks Property Search buying agency.

There are exceptions to the rule; the biggest of all being Cornwall, where demand has reached a record high since the start of the pandemic.

Tiny St Mawes sits on the south Cornwall coast, lined with holiday homes and fashionable hotels such as the Tresanton and The Idle Rocks.

It has seen the biggest rise in average prices of any seaside town over the past year, jumping nearly 48 per cent from £339,912 to £501,638 — the largest rise in the ‘race for space’ as people have quit the big cities for countryside and coast.

This marked the fastest rate of growth since Hamptons’ records started in 2013, surpassing the previous peak of 7.0 per cent in December 2014.

In May, the average rent on a four-bedroom property in Great Britain increased to £1,805 per month, up 9.5 per cent on the same month last year. Meanwhile rents on one-bedroom homes remained flat at 0.4 per cent.

Aneisha Beveridge, head of research at Hamptons said: ‘The pandemic has reversed a six-year trend which now makes it cheaper to rent than buy a home.

‘A year ago, lenders were either increasing their rates or withdrawing higher loan-to-value mortgages altogether. For first-time buyers in particular this pushed up the cost of paying a mortgage, if they could get one at all, to well above the cost of renting.

‘It is likely the balance will swing back somewhat towards buying, particularly as mortgage rates come down. However this is likely to be partly offset by rising house prices.

‘And while interest rates are falling, they’re still considerably above where they were pre-pandemic on higher LTV (loan-to-value) loans. Despite this, we expect the gap between renting and buying to close over the remainder of this year, moving back towards longer-term levels in 2022.’

The typical costs of buying versus renting were based on someone having a two-year fixed-rate mortgage and calculated using average mortgage rates.

The report by Hamptons comes after it was last month revealed how the North/South divide in property prices was beginning to shrink.

According to Zoopla, house prices in London rose 0.3 per cent in the past year, whereas in Middlesbrough they soared 10.06 per cent.

Earlier this month the website also revealed that the country’s hottest housing markets right now are not in leafy Surrey or posh Central London, but in Yorkshire, Humberside and the North-West, as the pandemic property world undergoes its own ‘levelling up’ exercise.

The time between listing a home for sale and a buyer’s offer being accepted in the North of England is now three weeks quicker than in 2019, while the areas boasting the fastest sales are Wigan, Barnsley and Burnley, claims Zoopla.

In London homes now take two weeks longer to find a buyer than in 2019.

Meanwhile, estate agency Savills forecast that the North-West and Yorkshire and the Humber will lead UK house price growth with rises of 6.0 per cent in 2022 and 5.5 per cent in 2023.

And by the end of 2025, Savills predicts the North West will enjoy an eye-watering 28.8 per cent rise overall.

Across the UK, the average increase is set to be 21.1 per cent, while London stubbornly stays in the slow lane with only 12.6 per cent growth.

‘Some of the price rises we have seen were overdue; country prices had lagged well behind London for years and some re-balancing was required,’ says James Greenwood, managing director of the Stacks Property Search buying agency.

Is buying the right option for you?

By This is Money for MailOnline

The decision to buy a home is a big one and shouldn’t be taken lightly.

Here, This is Money and the Money Advice Service run through a number of the pros and cons to consider before taking the plunge and buying a property.

Pros of buying a home

– One of the best things about buying a home is that once any mortgage repayments are paid, which of course can take many years, you will own the property outright and not have to worry about paying for somewhere to live.

– If the home you buy goes up in value over time, if you ever decide to sell it you will be able to take advantage of the equity to help you buy a bigger home or fund a more comfortable retirement.

– When you buy a property, you can spend money improving your home and increasing its value without having to ask a landlord, which is what tenants renting a property often have to do.

– In some circumstances, but not all, it can be cheaper to buy a home as opposed to renting one. This is the case in places like Scotland and Yorkshire & the Humber at present.

– As the Money Advice Service stresses, buying a home is a major commitment and you have to ensure you can afford to take it on.

– Maintenance costs like new boilers or a leaky roof can really stack up after you buy a home. And even before you move in, things like removal service fees can be expensive.

– Interest rates are very low at present, but if and when they go up, mortgage repayment costs could increase for some people. It will always pay to shop around for the best mortgage deal.

– If the value of your home falls, you might be unable to sell if you owe more to your mortgage lender than your home is worth, the Money Advice Service notes.

– You have less flexibility than when renting. For example, selling up and moving is more expensive as you have estate agency and legal fees to pay.