The parents of a former US Marine jailed in Russia for assaulting a Moscow cop have blasted Vladimir Putin’s claim their son was a ‘sh*tfaced troublemaker’ – and have begged Joe Biden to free a Russian criminal so he can come home.

Speaking on NBC’s Today show on Monday, Joey and Paula Reed lashed out the Russian president for branding their son a ‘drunk,’ claiming he had been convicted and given an unprecedented  nine year prison sentence by a ‘kangaroo court,’ and asked the US government to consider a prisoner swap scheme to bring their son Trevor home.

But the Reeds, who live in Fort Worth, Texas, insisted they did not want to be political, or get into a slanging match with Putin, and just wanted Trevor back in the US.

‘We don’t care how he comes home. If they want to exchange Trevor for some criminals that were low-level criminals or whatever’ Trevor’s father told NBC’s Savannah Guthrie on Monday.

‘We’re fine with that. We want our son home,’ his wife Paula added. 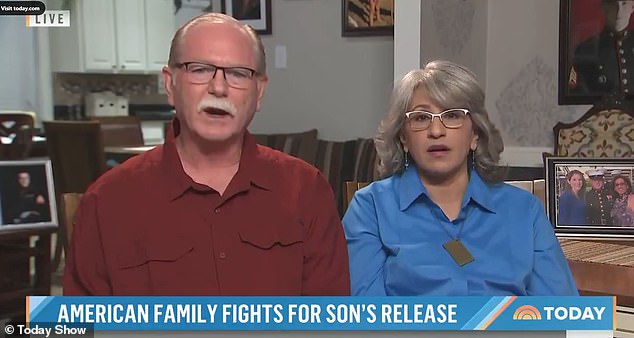 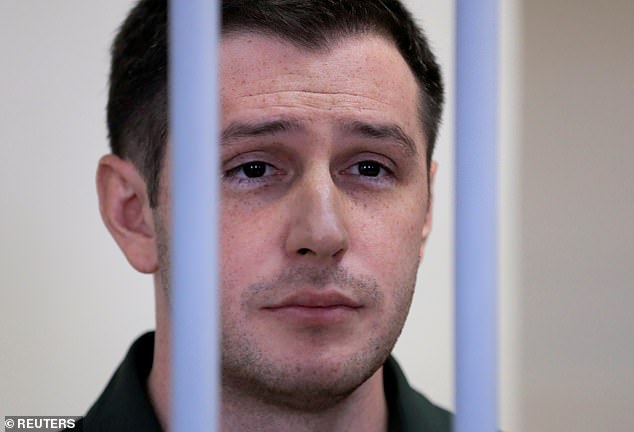 Pictured: Reed has been languishing in the Russian prison ever since his incarceration began in July 2020, having recently contracted COVID-19, his family says

‘Your guy, the marine (Reed) is just a drunk and a troublemaker,’ Putin told NBC News during an interview first screened Friday.

‘As they say here, he got himself sh*tfaced on vodka and started a fight, among other things he hit a cop,’ the Russian leader added.

On Sunday, President Biden told a G7 press conference that engineering a swap of suspected computer hackers between the US and Russia was ‘potentially a good sign of progress’ between the two countries, whose diplomatic relations are currently in the deep freeze.

But later that day, national security adviser Jake Sullivan said the president was not endorsing a ‘prisoner swap,’ dashing hopes of US families who claim their loved-ones have been wrongly convicted in Russia. 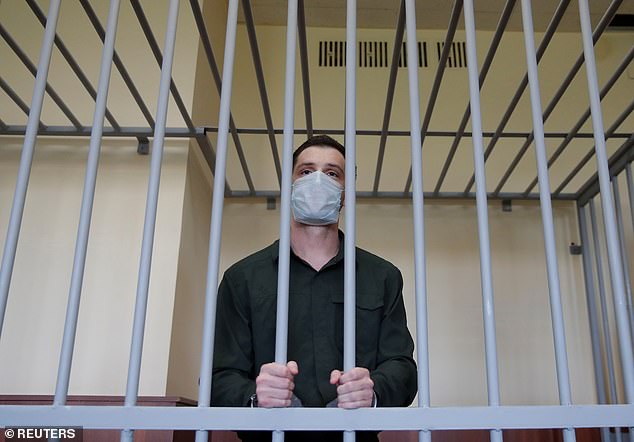 Trevor Reed is pictured in court in Moscow in July 2020. He is now serving a nine year sentence in a Russian prison over claims he drunkenly assaulted a cop 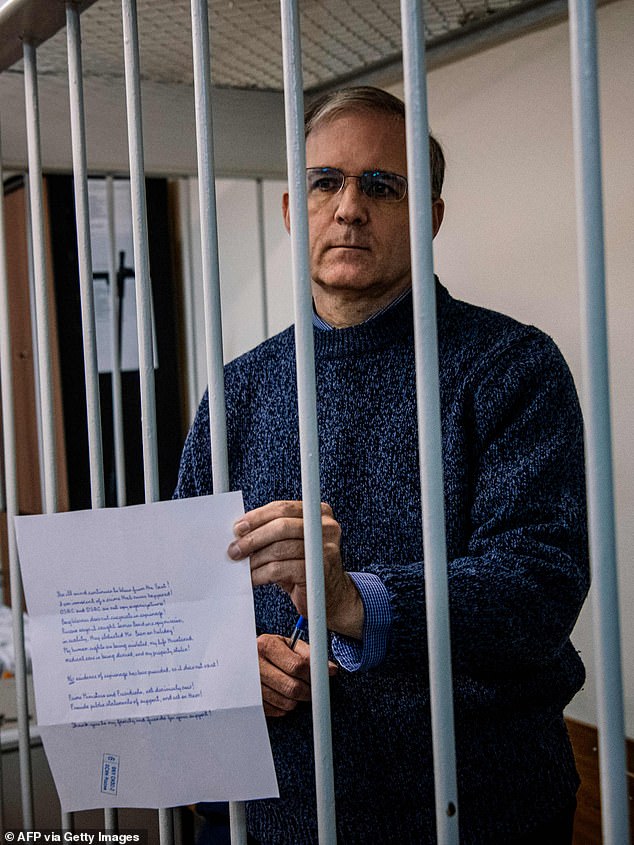 Paul Whelan, a 50-year-old former US Marine and corporate security director, was sentenced to 16 years in a Russian prison after being accused of espionage

Putin will be meeting with US President Joe Biden on Wednesday in Geneva, Switzerland, where the two world leaders will look to establish a better relationship with one another following increased tension over the years.

The Biden administration is working on repairing relations with Russia after their meddling in the 2016 US presidential election and 2014 annexation of Crimea, which set off worldwide condemnation at the time.

Reed’s family were excited at the prospect of their son potentially returning home, and were in full-support of the prisoner exchange between the two world leaders.

‘We’re very happy to hear that president Putin is open to a prisoner exchange and we hope that that’s something that happens very soon because Trevor and Paul Whelan both have been there long enough considering that they’re innocent of the charges against them,’ Trevor’s mother Paula said of Putin’s prison exchange offer to President Biden.

The possible prisoner exchange can’t happen soon enough for Reed, who contracted COVID-19 while incarcerated in the Russian prison, with his parents telling NBC’s Today Show that ‘he still had a fever, chest pain, and lost his sense of smell.’

The Reeds have gone weeks without contact with their son, they say, before adding that the last time they spoke, he hadn’t even received a COVID-19 test despite showing obvious symptoms. 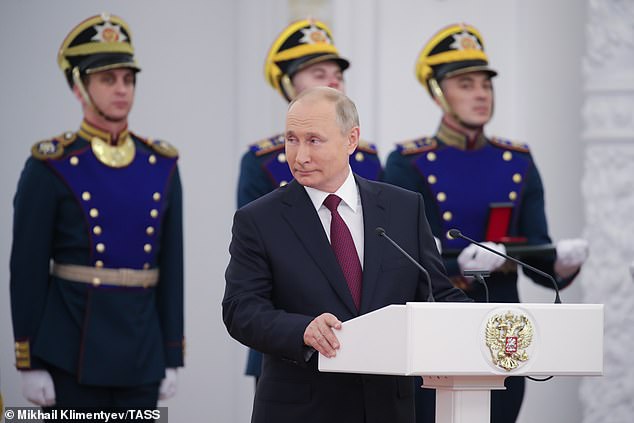 Putin will be meeting with US President Joe Biden on Wednesday in Geneva, Switzerland to discuss possible a prisoner exchange 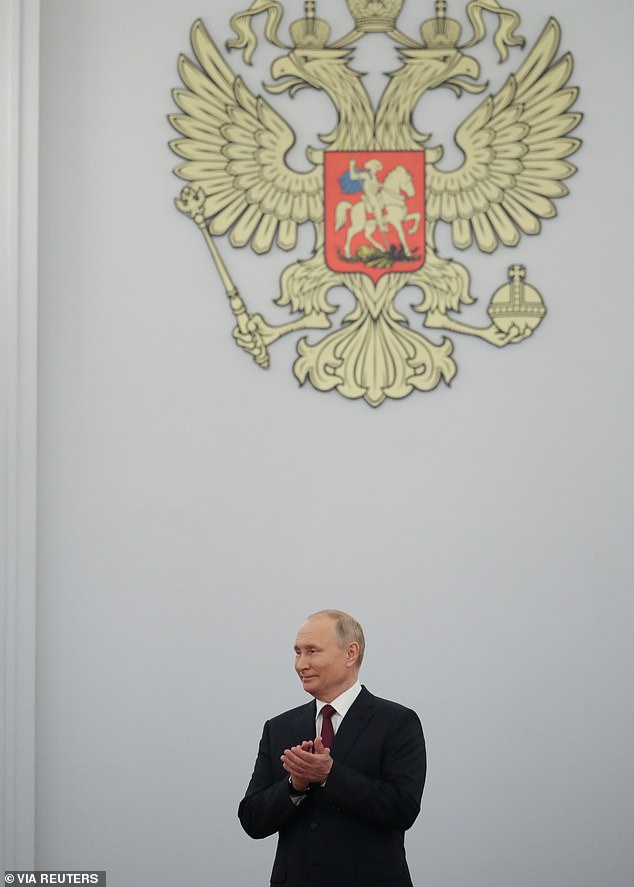 ‘Your guy, the marine (Reed) is just a drunk and a troublemaker,’ Putin said of Reed. ‘As they say here, he got himself sh*tfaced on vodka and started a fight, among other things he hit a cop’

‘They wouldn’t even give him a test for COVID, which I think is pretty standard in their jails,’ Trevor’s father revealed.

Reed, a student, moved to Moscow in 2019 in order to be near girlfriend Alina Tsibulnik, 22, who he had met on holiday in Greece.

The pair lived together for two months and had planned to marry in September, when they were both invited to a party for Tsibulnik’s colleagues on August 15.

At the party, which took place just a few days before he was due to fly out to Texas, Reed says he was encouraged to drink a large amount of vodka.

‘There is also a possibility that he may have been given other substances without his knowledge,’ a statement put out by his family said.

Meanwhile, Biden and US officials believe that both Reed and fellow former US Marine Paul Whelan, who is currently incarcerated on a 16 year prison sentence in a Russian jail after being accused espionage, are being wrongfully imprisoned on trumped up charges in the first place.