Mark Cavendish has left fans tipping him for shock call-up to the Tour de France after producing a stunning sprint victory at the Baloise Belgium Tour.

The Manx Missile, 36, had hinted at retirement at the back end of 2020 but is now back with a bang and found some incredible form on Sunday afternoon.

Having replaced the injured Sam Bennett for his Deceuninck-QuickStep team, the sprint king managed to secure a memorable victory in stage five of the race, showing superb speed in the final sprint. 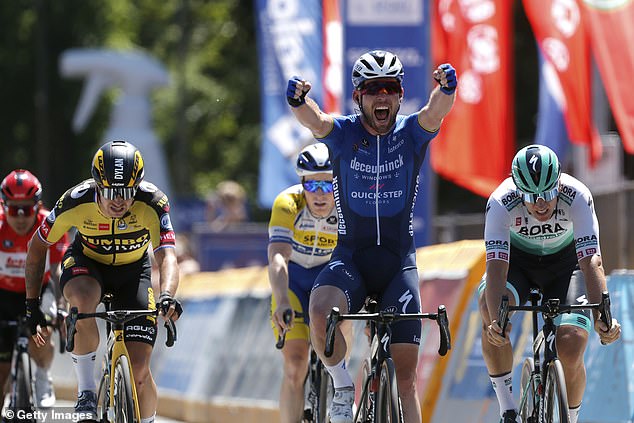 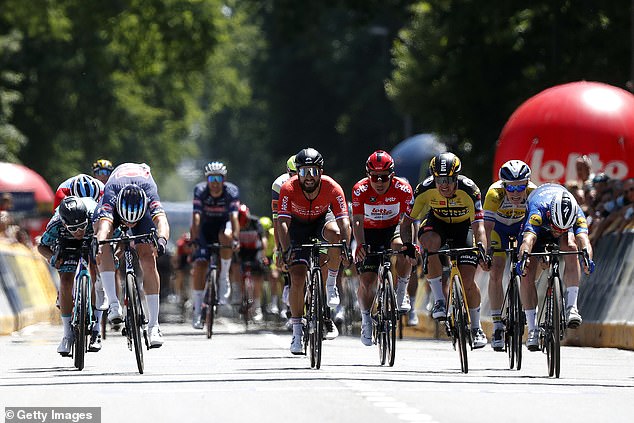 Cavendish (right) dips to the line to win the stage, producing a stunning performance at 36

The Manx rider sealed his victory in dramatic style, given a brilliant lead-out by his team-mate Michael Morkov before a bike throw on the line secured him his victory ahead of Tim Merlier, Pascal Ackermann and Dylan Groenewegen.

Posting to Instagram in the immediate aftermath of the race, Cavendish said: ‘Done? Nah mate, nowhere near.. Whaaaaa that was a nice win today @belgiumtour.

‘Absolute machine of @deceuninck_quickstepteam boys leaving all on the road to deliver me in the sprint and keep @remco.ev in the leaders jersey. So happy to finish off a wicked 5 days with the team.’

Although there are still question marks over Irishman Bennett’s fitness, Cavendish has been quick to dampen speculation over his participation in cycling’s most famous race, which begins in just 12 days.

‘We have to see,’ Cavendish said in a post-race interview. ‘We have the current green-jersey winner in Sam Bennett. I think it’s right to see how he’s going before we think of anything else.’

Cavendish was competing in the Belgium Tour for the first time, and the stage victory was the 151st of his stellar career. 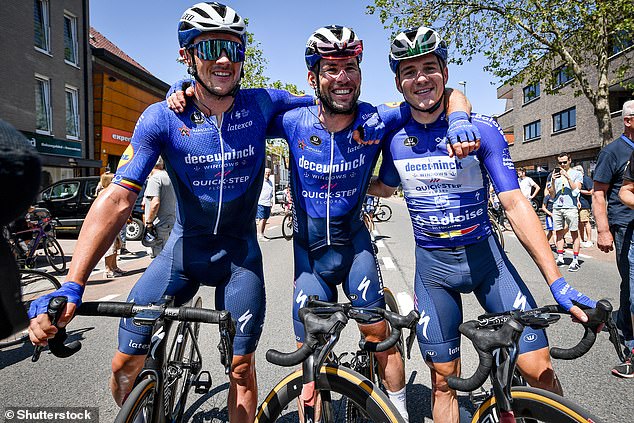 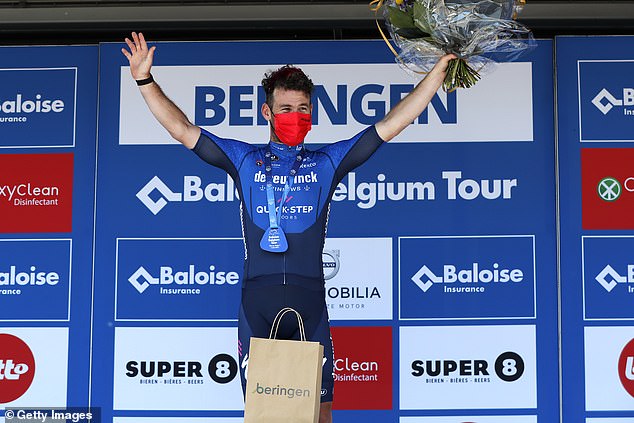 If he is to compete in the Tour in under a fortnight’s time, team manager Patrick Lefevere has said that a renegotiation of his contract would be needed first.

The former world champion joined the team in December following a season with Bahrain-McLaren and is on tiny wages.

Lefevere confirmed that the deal was only made possible by him bringing a personal sponsor on board to finance it, and is based on the UCI minimum which currently stands at just £34,400.

‘I went to dinner with Cavendish on Sunday evening and the subject came up,’ the team boss said. ‘I asked him, “Do you want to do another Grand Tour?” and he replied, “Not on this salary.”

‘I know that may seem a cynical response, but I understand his point of view.

‘Mark is 35 and came to us at the last minute, and when he signed the Tour was absolutely out of the question. He signed a contract at the minimum wage because we had minimal expectations.’