Kalvin Phillips made himself a household name on Sunday when he became the toast of the nation with his magnificent man-of-the-match display in England’s 1-0 win against Croatia at Wembley.

It is another fabulous installment in what has been a whirlwind 12 months for Phillips. Had the European Championship gone ahead last year and not been derailed by the pandemic, he would at best have been an outside contender for the squad because at that point, Phillips hadn’t even played in the Premier League for his boyhood club Leeds United.

Very much a family man, it’s a bitter sign of the times that Phillips, safely tucked away in his Covid-secure England bubble, cannot mark his breakthrough by having a moment in person with those he loves most.

His girlfriend Ashleigh Behan, who he has been with since he was 11, said she felt ‘so unbelievably proud’ of Phillips, 25, while the the Leeds man is also extremely close with his mum Lindsey, his younger brother and two sisters.

When Leeds won promotion to the Premier League last year, they were all on hand to celebrate at the club’s Elland Road stadium and took it in turns to pose for pictures with the Championship trophy alongside Phillips. His late grandmother Val was also there – she died in February after a short illness and had been one of the first people Phillips called when he made the England squad for the first time last August.

One figure missing from the party that night was his father, Mark. He is currently serving a prison sentence at HM Prison Wealstun, which is just a fifth of a mile from Leeds’s Thorp Arch training ground. 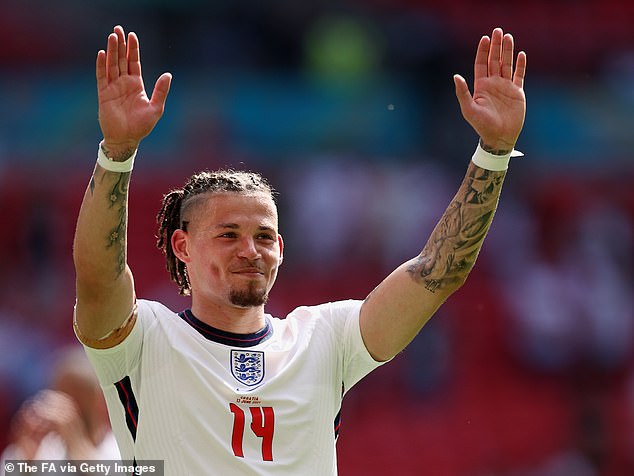 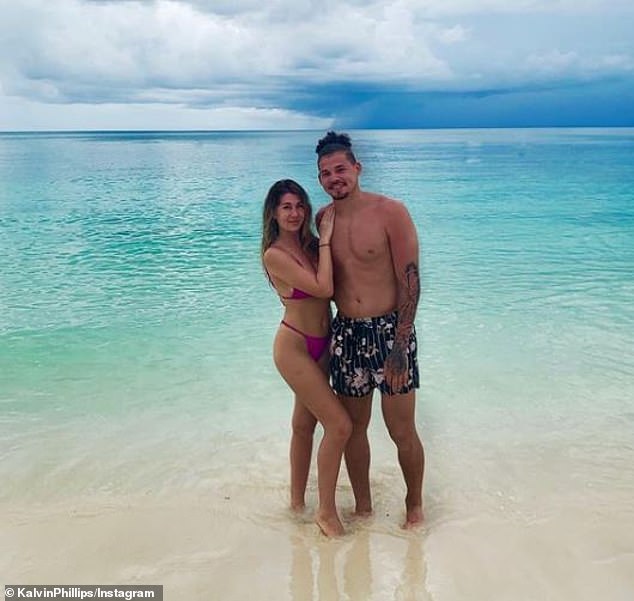 Phillips, 25, has been with his girlfriend Ashleigh Behan since he was only 11 years old 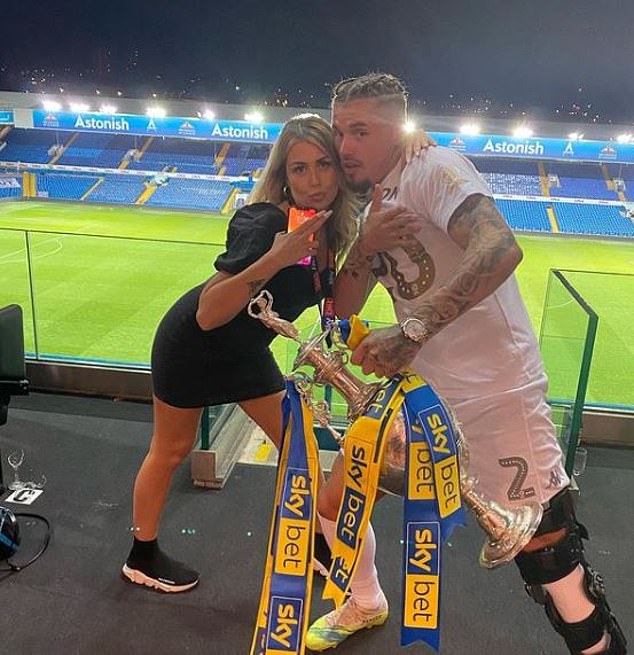 During the club season for Leeds, Phillips drives past it every day. He doesn’t visit too often, preferring to speak over the phone every fortnight.

Phillips told The Times that when he spoke to his dad for the first time after winning promotion, he could hear the cellmates singing the Leeds anthem Marching on Together in the background and ‘banging on the walls’ in celebration.

Phillips has been open about his father’s imprisonment in the past and has a mature and emotionally intelligent perspective of his circumstances.

‘He’s been in prison, out of prison. He got into the wrong crowd, drugs, fighting, anything you can name,’ Phillips explained. ‘He wasn’t brought up in the best situation. He never knew his father. He got the name “Chalky” because he was the only black guy in his school and in his neighbourhood. A lot of people still now call him “Chalky”. It’s crazy.’

Phillips’ father is Jamaican and the midfielder was being linked with a call-up for the Caribbean nation as recently as last summer, before Gareth Southgate intervened and assured him that he had a pathway into the England fold.

Phillips takes pride in his Jamaican heritage and has spoken powerfully about the Black Lives Matter movement. 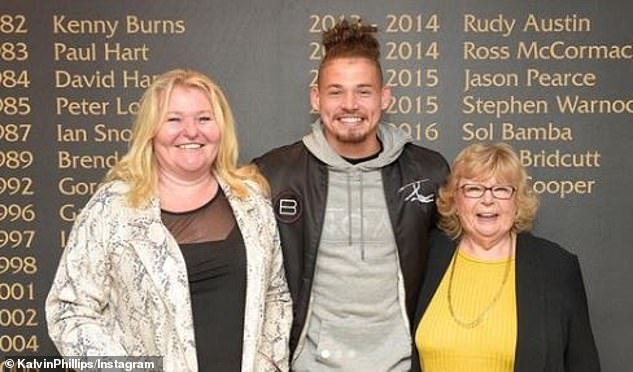 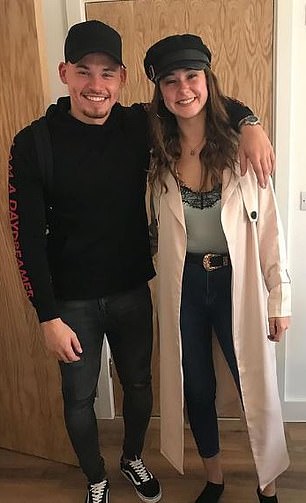 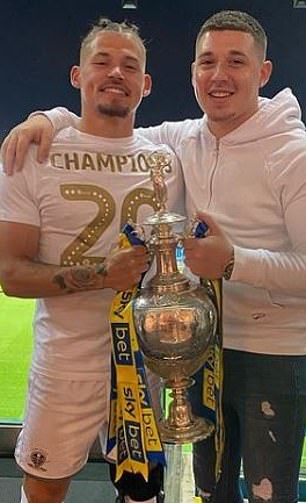 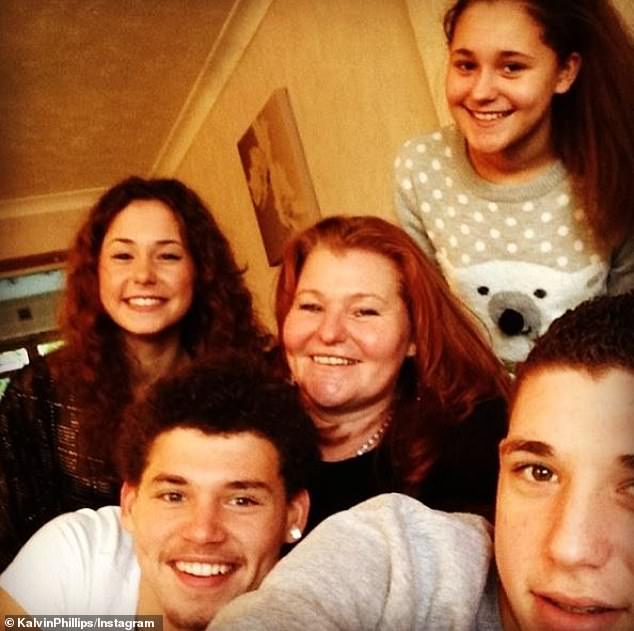 Phillips (bottom left) pictured alongside his brother, two sisters and his mum back in 2014

‘But I’ve got friends and family, sometimes they can’t even walk down the street without being given a dirty look. I’ve got friends who can’t even sit out in their front garden because they’ve got neighbours who shout towards them and treat them with no respect whatsoever.

When Phillips made the England squad for the first time last August, one of the people he first called was his doting gran Val, who herself had developed a slice fame after her endearing appearances in the Amazon documentary about Leeds, called Take Us Home.

‘He said “I’ve got some news”. I said “are you getting married?” He said “no”. I said “are you having a baby?”. When he told me Gareth Southgate had rung, oh my god I couldn’t believe it. I’m so proud of him,’ she explained to ITV at the time.

She passed away in February after a short illness, with Phillips posting a heartfelt tribute to her on Instagram.

‘I wouldn’t be where I am today if it wasn’t for you and the heartbreak I feel now is incomparable,’ he wrote. ‘I’m just glad the world got to see how much you mean to me, and you got to experience how much of an impact you made on me.’ 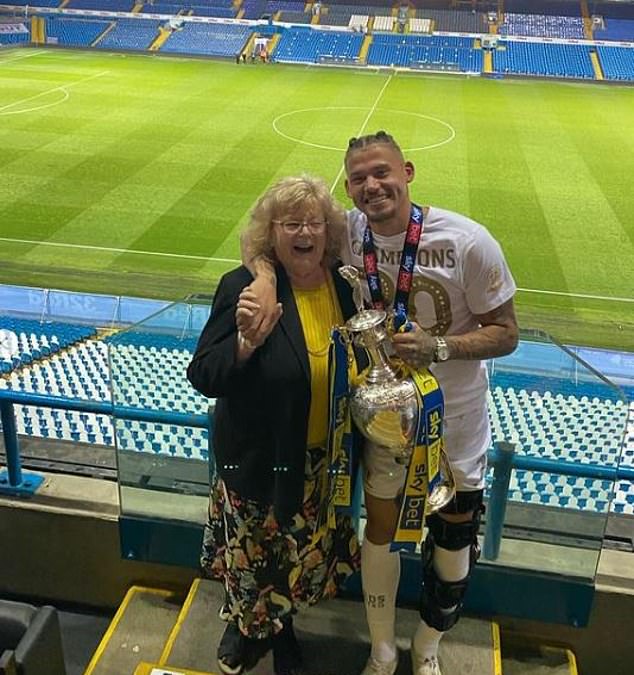 Phillips pictured with grandmother Val, who died in February, celebrating when Leeds won the Championship and got promoted to the Premier League in 2020 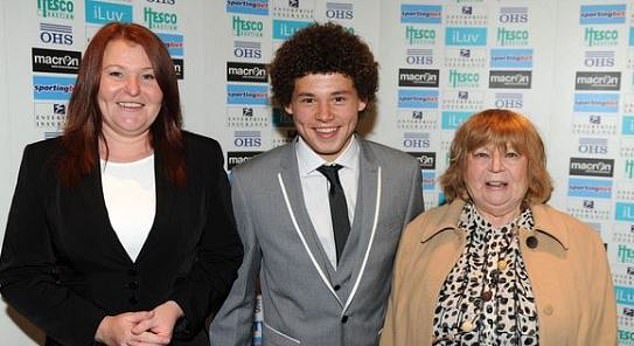 Phillips pictured as a teenager alongside his mother and grandmother – he paid tribute to the pair of them on Mother’s Day, shortly after grandmother Val had passed away 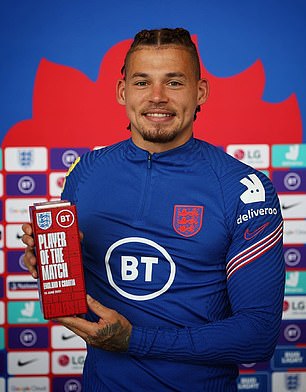 Phillips has also spoken at great length of how close he is to his mother Lindsey, who used to sleep on the sofa at night in the house where she raised him, his younger brother and two sisters.

Growing up, Phillips and his siblings had free school meals and now, he donates to food banks in his local area. He has commended the ‘massive’ work his England team-mate Marcus Rashford has done on the issue during the pandemic.

Phillips regularly shares pictures of him with his mum on social media and on Mother’s Day this year – shortly after the death of his gran – he posted one of him with them both, saying: ‘Happy Mother’s Day to these two amazing women. I love and appreciate everything you do for me.’

Phillips was born as a triplet with two sisters but one, Lacreasha, died a couple of months later.

‘On our birthday (December 2) we always say happy birthday to Lacreasha as well,’ Phillips told The Times. ‘We always go and put flowers on her grave and remember that day she passed away. I think about her when I play. I’ve a tattoo on my arm which symbolises her. That’s why I kiss my arm and point to the sky.’

On his last birthday, he posted a picture of the three of them as babies on Instagram and wrote: ‘Happy birthday to my two beautiful sisters! One that’s always beside me and one that is always looking over me. I love you.’ 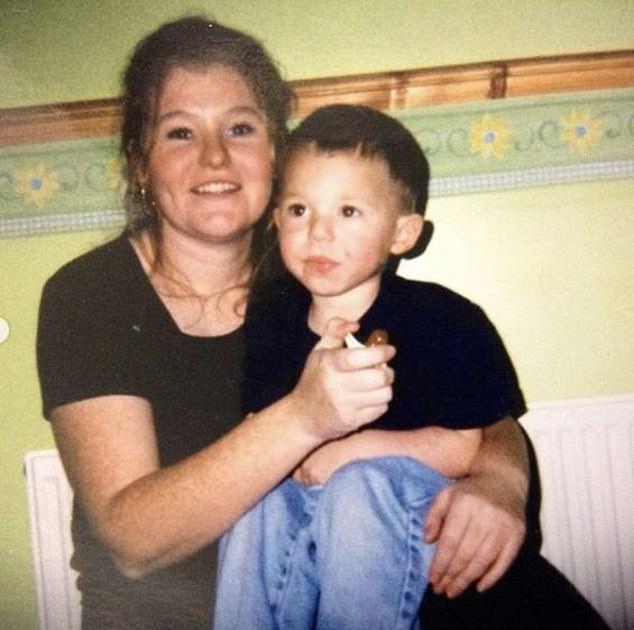 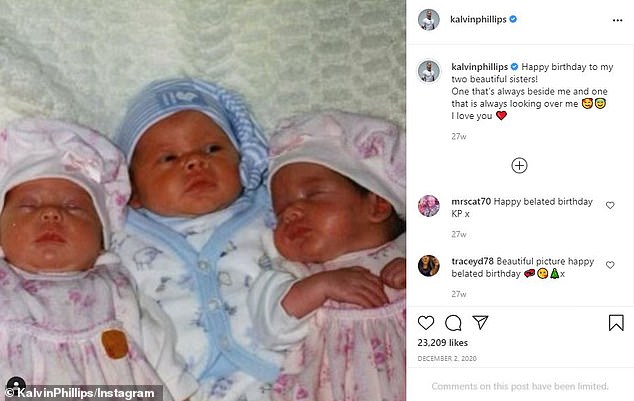 Phillips was born a triplet with two sisters, but one died a couple of months after being born 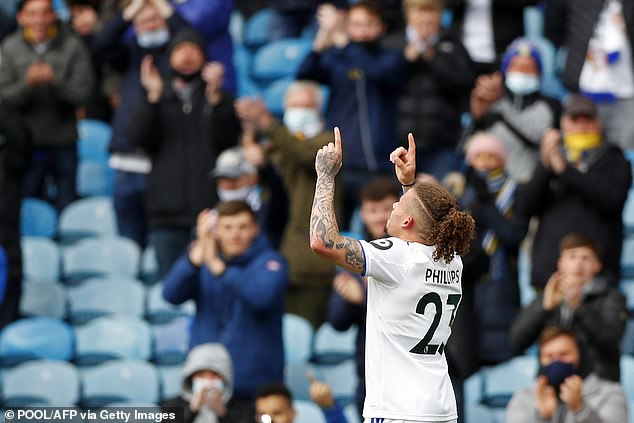 Phillips has said he points to the sky while playing to honour the memory of his sister Lacreasha, who he has said is ‘always looking over me’

When Phillips was 11, he met his childhood sweetheart Behan, who until recently was working two jobs as a receptionist and a cashier at a pizza shop in Leeds. Now, with Phillips believed to earn around £50,000-a-week, he can take care of his family and their future.

‘The rewards in football are very good so it helps me to look after my family and they are the reasons why I carried on pushing,’ Phillips said to The Mirror in March last year.

‘I didn’t have much but my mum and grandma gave me as much as they could, but we weren’t a rich family and we had to work hard for what we got.’

Another key figure in Phillips’ rise is the Leeds manager, Marcelo Bielsa.

When he took over at Elland Road in 2018, he told Phillips two things; that he was going to convert him from an attacking midfielder to a defensive one – the position he played for England on Sunday – and that he wanted him to lose weight.

The Argentine coach has developed Phillips’ tactical understanding of football and sharpened his fitness – beyond shedding almost a stone – through his notorious ‘murderball’ training method. 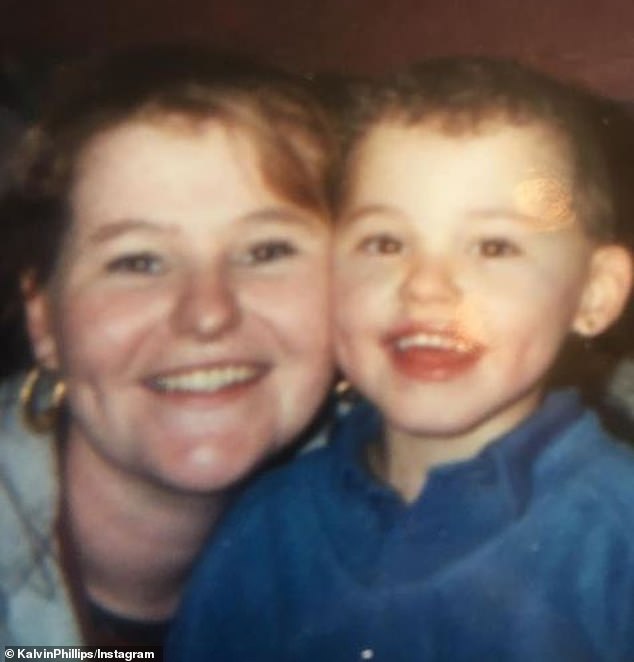 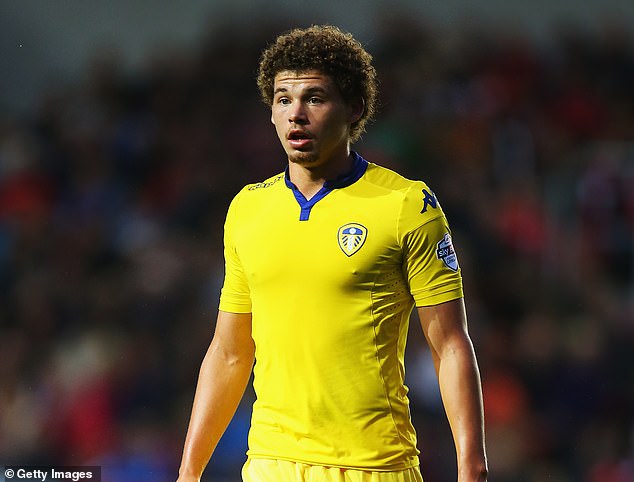 Phillips, pictured playing for Leeds in 2015, has been with his boyhood club since he was 14 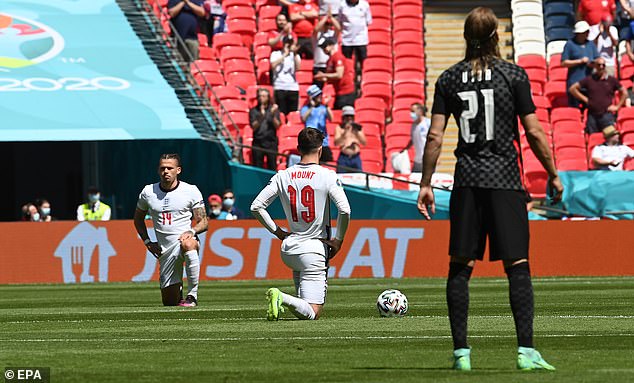 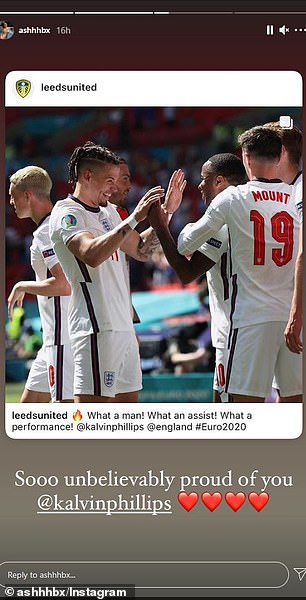 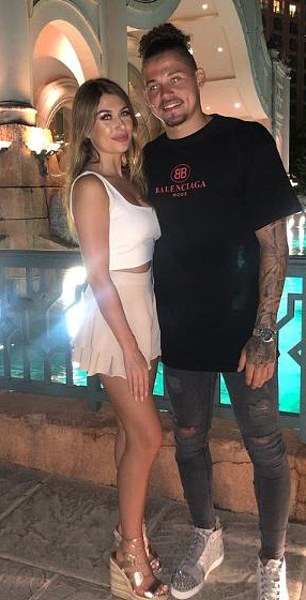 Behan took to Instagram (left) to say how proud she was of Phillips (pictured together, right) after his display against Croatia on Sunday afternoon

‘Every Wednesday, we do the toughest training session I’ve ever done in my life,’ Phillips once told Sky Sports. ‘We do a thing called “murderball”. Well, we (the players) call it murderball… Bielsa calls is football!

‘It is where we play five minutes of constant football at 100 miles per hour. If the ball goes out, you have one of the staff waiting at the side to throw another straight back in. It is carnage but it is good because I don’t think many teams train at our intensity.’

When Phillips was first called up by England, he was quizzed by his new team-mates about so-called ‘murderball’, where no fouls are given by Bielsa so as not to interrupt the pace.

‘They couldn’t believe it,’ Phillips told Leeds United TV. ‘As I say to them, until you do it, you can’t understand how intense and how hard it is.’

Phillips’ energy was notable in the latter stages against Croatia and plenty of gas in the tank is vital for any player as they face up to the rigors of tournament football.

But for all his poise and assurance on the ball, Phillips also loves a tough tackle – as his now England team-mate Jack Grealish learnt the hard way when Aston Villa faced Leeds – where Phillips has been since he was 14 – in a thunderous clash between the two teams in the Championship in 2019.

‘I hated that Leeds game,’ Grealish told The Athletic. ‘He (Phillips) told me after the game that all he wanted to do was stop me. It doesn’t bother me. I actually like getting kicked.’

Phillips was unapologetic in a subsequent interview, saying: ‘When you’re up against a player like that, the only way to stop him is to tackle him or foul him. When Villa came here, he was their best player. He was the danger. So we did a job on him.’ 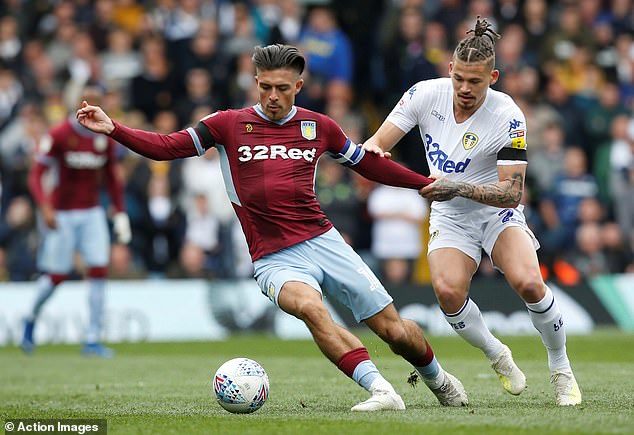 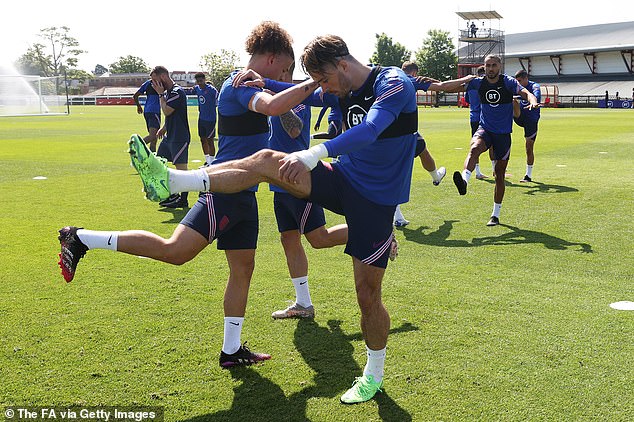 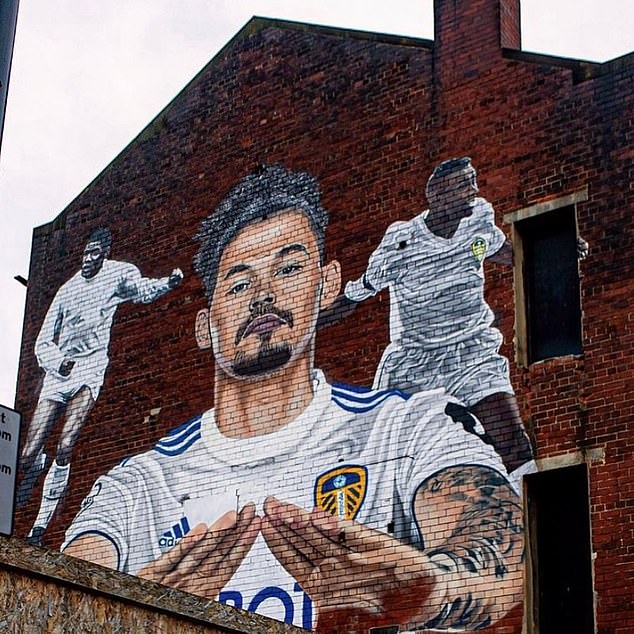 His performance against Croatia would not have been a surprise to Leeds fans, who have long been mooting him as an England regular. There is a mural of Phillips in the Leeds city centre, pictured alongside club legends Lucas Radabe and Albert Johanneson – so high is his standing with the club’s ardent fanbase.

Phillips is now almost certain to start in England’s second game against fierce rivals Scotland on Friday back at Wembley.

It’s a match that will be played at a ferocious pace with some heavy tackles – seemingly ready-made for Phillips to shine once again and continue his remarkable ascent.

Let’s hope that when he’s out of the England bubble, he’ll have something far more significant to celebrate with his family than the Croatia triumph.