Grant Hackett has weighed in on the ‘toxic and dysfunctional’ culture of Australia’s elite swimming program, demanding abusive coaches be ‘weeded out’ of the sport.

The Australian swimming legend, who won gold at two Olympics, said he was horrified when former competitive swimmers lifted the lid on the abuse – which left athletes psychologically damaged after years of humiliating abuse.

‘The people that are partaking in this behaviour need to be weeded out,’ Hackett told the Today show on Monday morning.

‘We need to get rid of these people and move the sport forward.’ 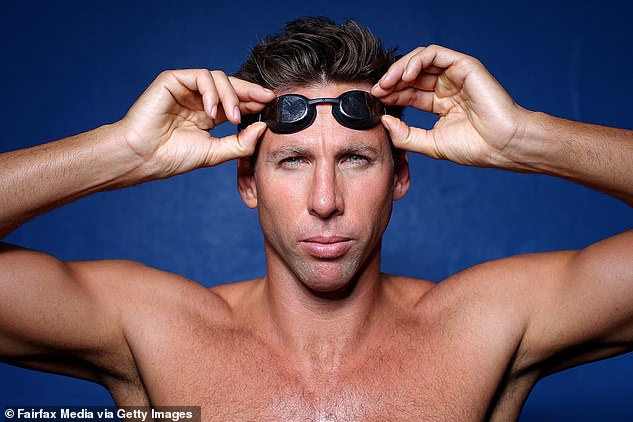 Grant Hackett (pictured), 40, has weighed in on the ‘toxic and dysfunctional’ culture of Australia’s elite swimming program, demanding abusive coaches be ‘weeded out’ of the sport

Dr Jenny McMahon, a competitor turned academic, documented her findings about the damaging culture after interviewing hundreds of coaches and athletes over 14 years.

She revealed young girls recalled being ‘oinked’ at and called ‘lard a***e’ if they were deemed to be overweight while a young boy was forced to wear a woman’s swimsuit as punishment for slow laps.

Hackett went on to say the allegations had shocked him and insisted that he had a positive experience as a rising athlete back in the early 2000’s.

‘To hear these accusations is very, very disappointing,’ he said.

The 40-year-old former athlete welcomed an investigation into the allegations and said he had no doubt it would result in abusers being dealt with accordingly.

‘We need to make sure that none of this stuff takes place because it’s just so disappointing.’ 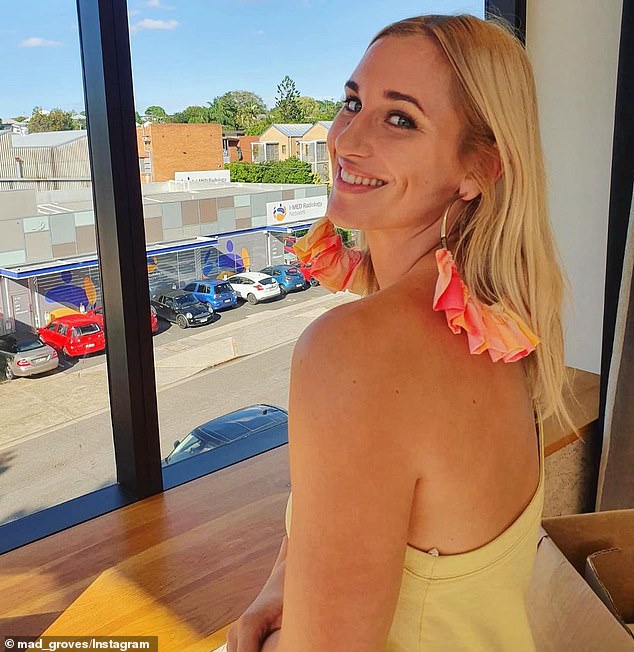 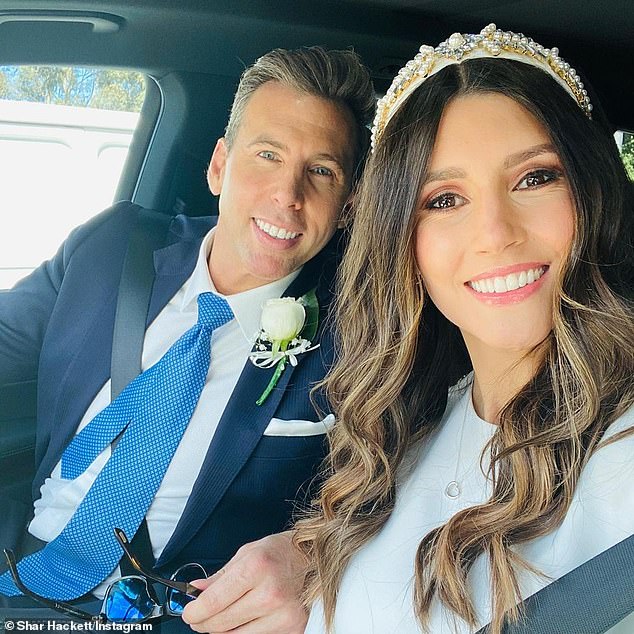 Hackett is considered one of Australia’s most successful swimmers, setting 15 world records, winning a total of seven medals at three Olympic games between 2000 and 2008 and 10 gold medals at World Championship games.

Dr McMahon, a relay gold medallist from the 1990 Commonwealth Games in Auckland, released her findings after swimmer Maddie Groves withdrew from qualifying for next month’s Olympic Games in Tokyo as she called out the ‘misogynistic perverts’ and the ‘boot lickers’ she says are running the sport.

The University of Tasmania researcher said there was no doubt that ‘good coaches’ remain in the sport, but she described the culture in Australian swimming as patriarchal, male-dominated, and dysfunctional.

‘It looks like all smiles, gold medals and PBs to the outsider, but it leaves a trail of broken athletes and coaches when they do not conform and perform,’ Dr McMahon said.

Among her findings were claims an 11-year-old girl was forced on go on a 10km run after she was busted eating ice cream while another coach suggested a swimmer get a breast reduction because ‘your tits are too big’. 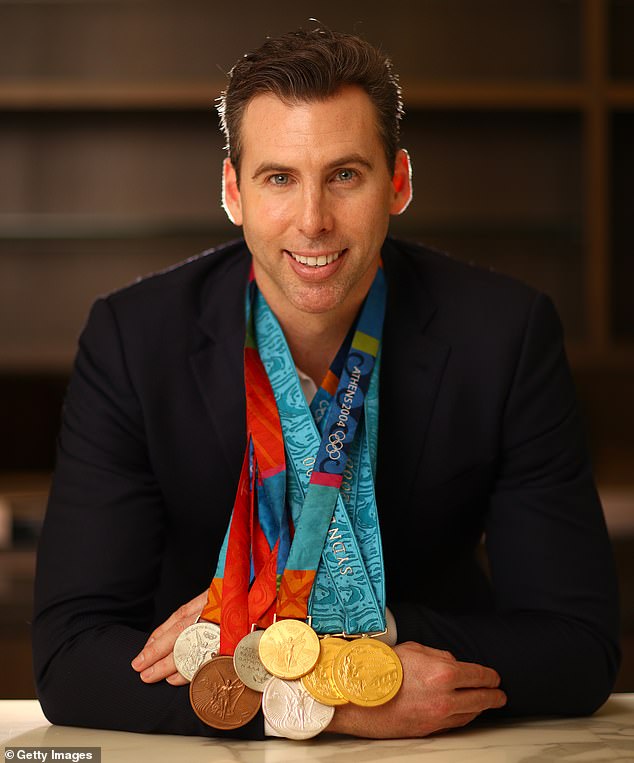 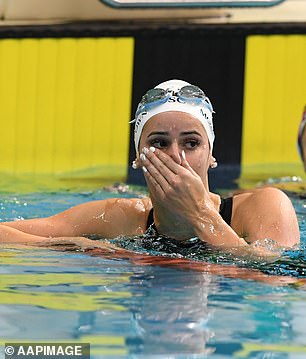 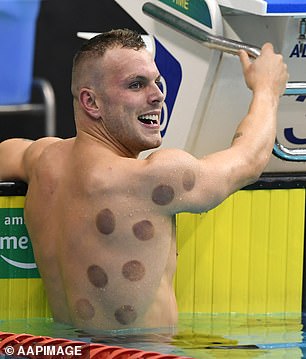 Australia’s Olympic hopefuls have been competing in the Olympic Trials this week, with Kaylee McKeown (left) setting a new world record for the 100m backstroke 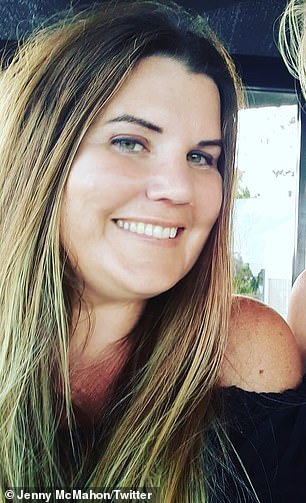 She also claimed a teenage boy recently endured the humiliating ordeal of being forced to wear a girl’s swimming costume in front of his peers at squad training after failing to meet his goal time.

The toxic culture of the sport goes back at least as far as the 1990s when Dr McMahon was an elite swimmer, winning one gold and two silver medals at the Commonwealth Games.

‘[I was subjected to] body ridicule, daily weigh ins… I was left broken when I finished swimming,’ Dr McMahon said.

She says she suffered mental health issues, eating disorders and later drug addiction as the result of harsh coaching practices she endured.

Dr McMahon described the sport’s reporting system as broken and claimed she was told by swimmers they had to make a report with their abuser – often their own coach – present.

She called for the Australian Human Rights Commission to oversee an independent review of the sport.

‘It is very narrow-minded to think it is just about women, women’s health and body shaming. This is about systemic and cultural issues in swimming,’ Dr McMahon said. 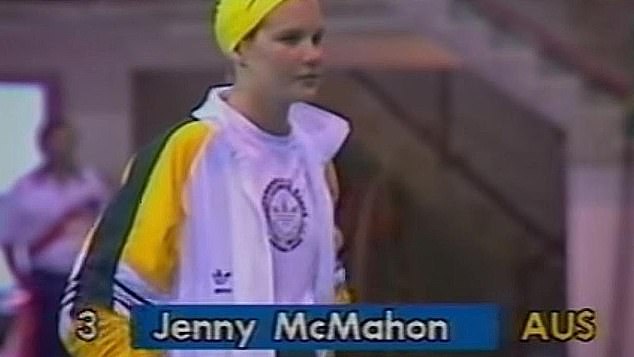 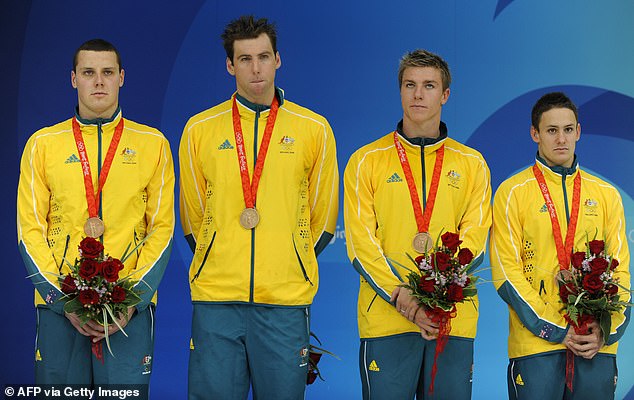 Hackett is considered one of Australia’s most successful swimming exports, setting 15 world records, winning a total of seven medals at three Olympic games between 2000 and 2008 and 10 gold medals at World Championship games 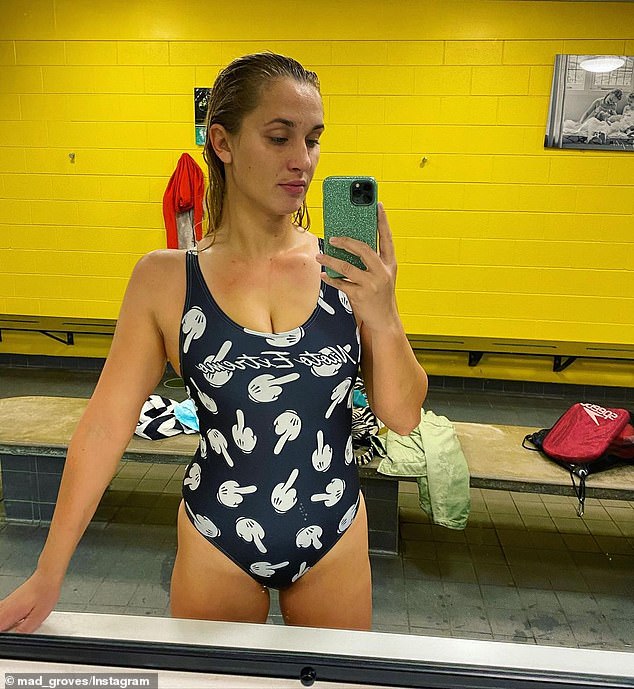 Groves (pictured), who claimed the sport is run by misogynists, says she felt ‘supported’ in her decision to quit and vowed to return to racing later in 2021

Groves, who claimed the sport is run by misogynists, says she felt ‘supported’ in her decision to quit and vowed to return to racing later in 2021.

‘You can no longer exploit young women and girls, body shame or medically gaslight them and then expect them to represent you so you can earn your annual bonus,’ she wrote.

‘Make them pervs quake in fear from the number of people supporting a statement that threatens their existence.’

Groves, winner of two Olympic silver medals at the 2016 Games in Rio as well as two Commonwealth golds, announced on Wednesday she would not swim at the Olympic trials in Adelaide, due to begin this weekend.

The 26-year-old then unleashed on the Australian swimming community and in particular those in charge in a series of blistering social media posts on Thursday.

‘Let this be a lesson to all misogynistic perverts in sport and their boot lickers,’ her furious post said on Thursday morning. 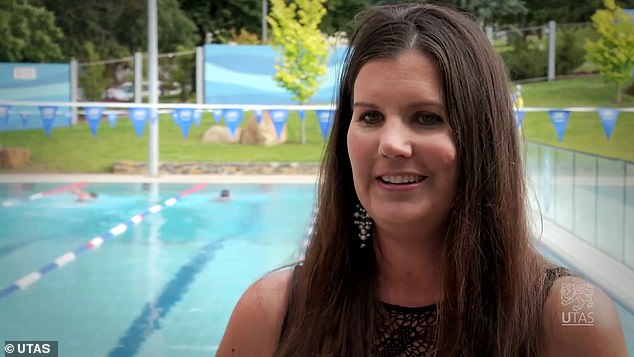 Now a senior academic, Dr McMahon  (pictured) has conducted interviews with hundreds of swimmers and coaches over the last 14 years

Groves then appeared to take exception with a private message she appears to have received on social media in reply to her tirade.

‘If you or your partner have contributed to an environment that’s unsupportive of people with chronic illness or made decisions around cutting athlete funding in the last four years do not f**king DM me telling me I’m brave for pulling out of the Olympic trials,’ she posted on Instagram.

‘What’s brave is showing your face in a community you’ve ripped off for the sake of your own career.’

Groves was due to compete in the 100m butterfly and 50m freestyle events at the trials in Adelaide, which began on Saturday. 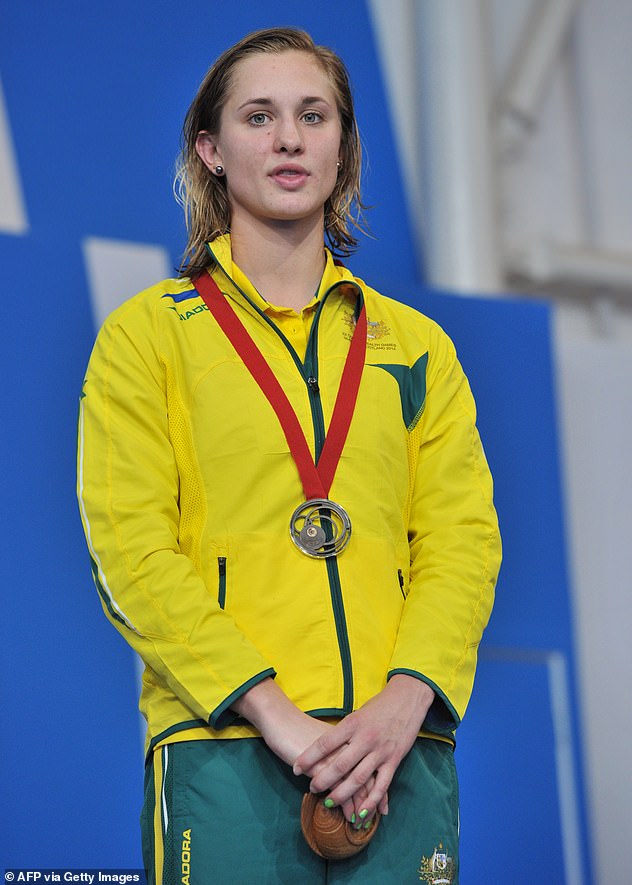 Swimming Australia president Kieren Perkins later claimed the sporting body had tried without success to contact Groves about the complaints she first aired on social media in November 2020.

‘We’ve reached out to her since December 2020 to try and engage her on these concerns that she has,’ Perkins said on Friday.

‘We’ve done it again now and unfortunately at this point, we’ve not been able to have a direct conversation with Maddie to understand what her concerns are, who the people involved are, so we can investigate and deal with it.

‘We certainly encourage her to do that because this is one of the most significant issues and challenges that we and all sports have, to make sure our athletes are well supported and protected in their environment.

‘Unfortunately we’ve just not been able to do that because Maddie has not engaged with us directly yet.’ 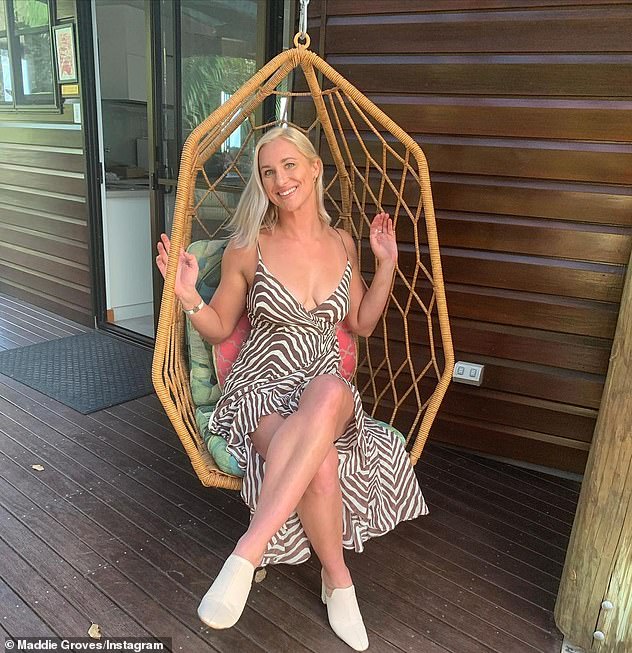 Swimming Australia has been consciously working on issues of institutional concern for the past decade.

Our focus is what we do today and in the future to ensure safe elite performance.

We are committed to the work of a solutions-based framework for Swimming Australia’s future.

This is ongoing and daily work.

Integrity and care are vital to our sporting success, we recognise this and it forms the foundation for our actions as an organisation.

Our Board of Directors is committed to the wellbeing of our swimmers and to the work it takes to create an environment of success and safety.

Our new CEO Alex Baumann has proactively begun a strategic structural review of Swimming Australia, five weeks into this role. Our Board will meet at the end of the month to have this strategy session. In addition to this planning, our Ethics and Integrity Committee of the Board will be closely examining all matters relating to issues raised this week.

This is a crucial week ahead of us, we know though these issues are too important to ignore. They need to be addressed here and now. We are committed to keeping our people safe and well.

We have taken the following steps to further our work – and have instigated these steps this morning.

We will prioritise our current work across our integrity program. We will work with an independent female panel to investigate ongoing issues related to women and girls’ experience and advancement in our sport. Their focus will be on our future.

Our board director Tracy Stockwell will help establish this process. She has significant personal elite athlete experience and organisational experience with Swimming Australia.