Cartoons, drawings and photographs documenting life in a brutal Japanese prisoner of war camp have been found in an archive belonging to a former soldier.

The sketches depicting the plight of the British PoWs were produced in secret by Captain Harry Witheford and fellow inmate Ronald Searle, the famous illustrator.

The scenes included the notorious Changi PoW camp in Singapore and the building of the ‘Death Railway’ along the River Kwai in Burma.

There are three previously unseen cartoons by Searle, who went on to create the St Trinian’s comic strip series, which was the basis for several films.

One cartoon is a sketch to mark Captain Witheford’s wife Edna’s birthday on April 10, 1944, which shows four officers wearing only loincloths toasting her with mugs of beer.

The archive has been stored in a suitcase for years and is now expected to fetch up to £4,000 at Tenants Auctioneers, in Leyburn, North Yorkshire. 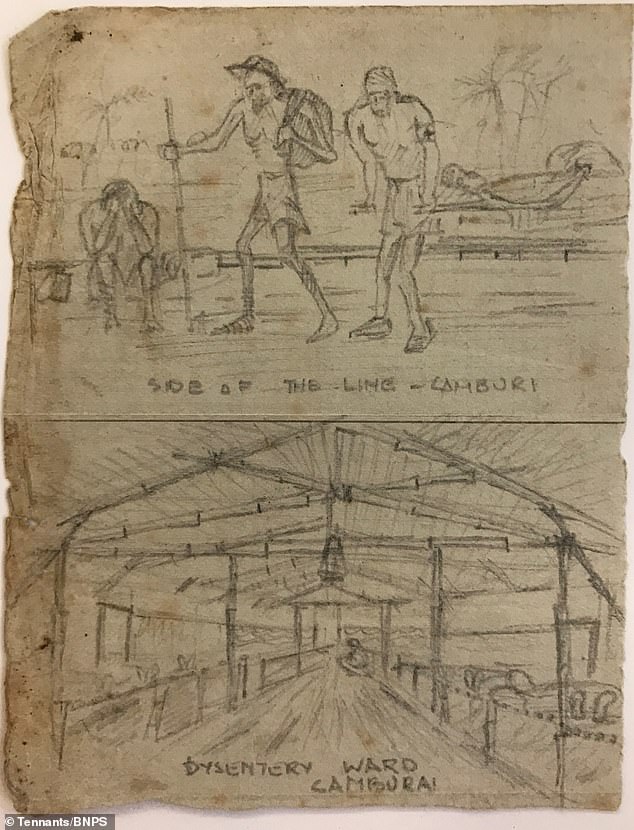 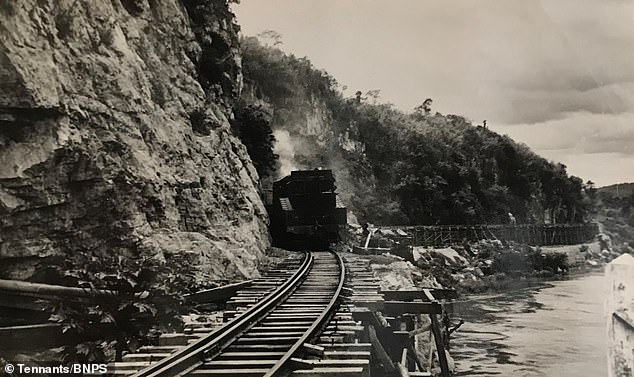 Included in the archive is a calendar which Searle created for his friend. It depicted an image of an army officer lying besides a naked blonde woman.

Captain Witheford’s accomplished work includes a drawing of a prisoner having a bath covered in sunburn from working on the railway.

There are also several pencil sketches of the building of the railway that was the subject of the epic 1957 war film The Bridge on the River Kwai starring Alec Guinness.

The so-called Death Railway claimed the lives of 12,000 Allied prisoners of war who were subjected to forced labour during its construction in the Second World War. 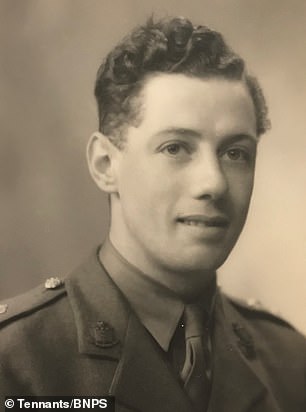 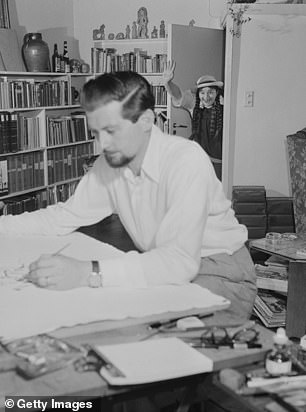 The satirical sketches depicting the plight of the British PoWs were produced in secret by Captain Harry Witheford (left) and fellow inmate Ronald Searle (right). There are three previously unseen cartoons by Searle, who went on to create the St Trinian’s comic strip series

The archive includes black and white photos of the railway and the Burmese jungle and a journal kept by Captain Witheford in which he clearly pines for home.

It has been stored in a suitcase for years and has been consigned for auction by a friend of the Witheford family for an estimated £4,000.

The archive also contains a copy of the bestselling memoir The Naked Island by Russell Braddon who was friends with Captain Witheford in Singapore and Burma.

Braddon was the first PoW to describe the appalling suffering of the captured men.

Oonagh Drage, of Tenants Auctioneers of Leyburn, North Yorkshire said: ‘Harry Witheford was in Changi PoW camp along with Ronald Searle and other people who have written books about it. 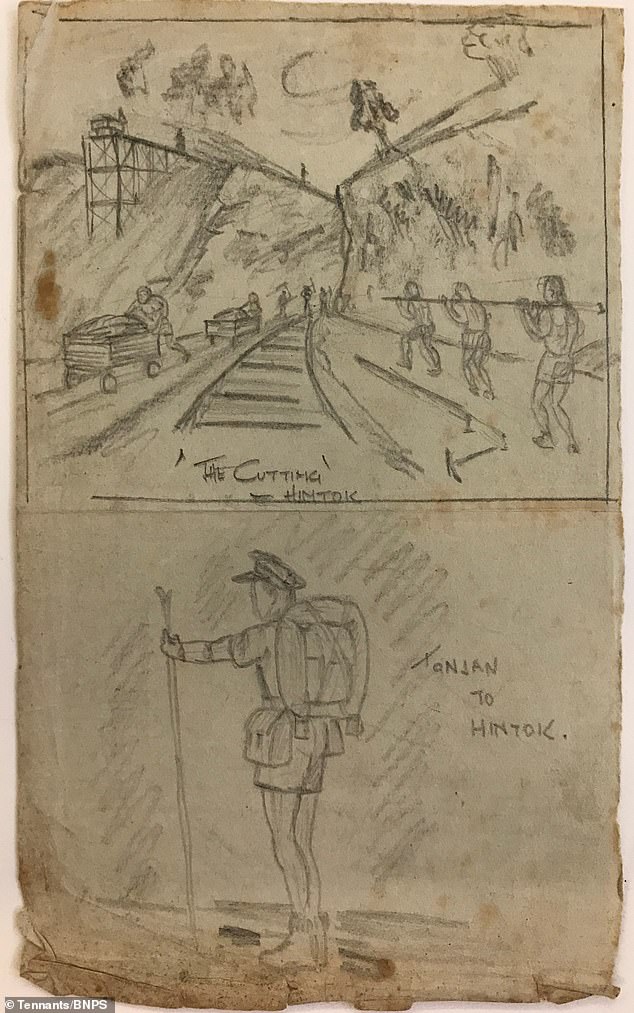 The archive has been stored in a suitcase for years and is now expected to fetch up to £4,000 at Tenants Auctioneers, in Leyburn, North Yorkshire. Pictured: One of Captain Witheford’s sketches of the beginning of the railway 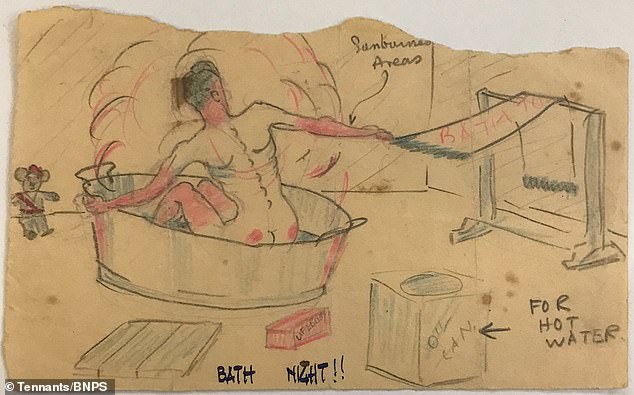 Captain Witheford’s sketches also show the plight of the prisoners. The above image shows an extremely thin prisoner having a bath while covered in patches of sunburn 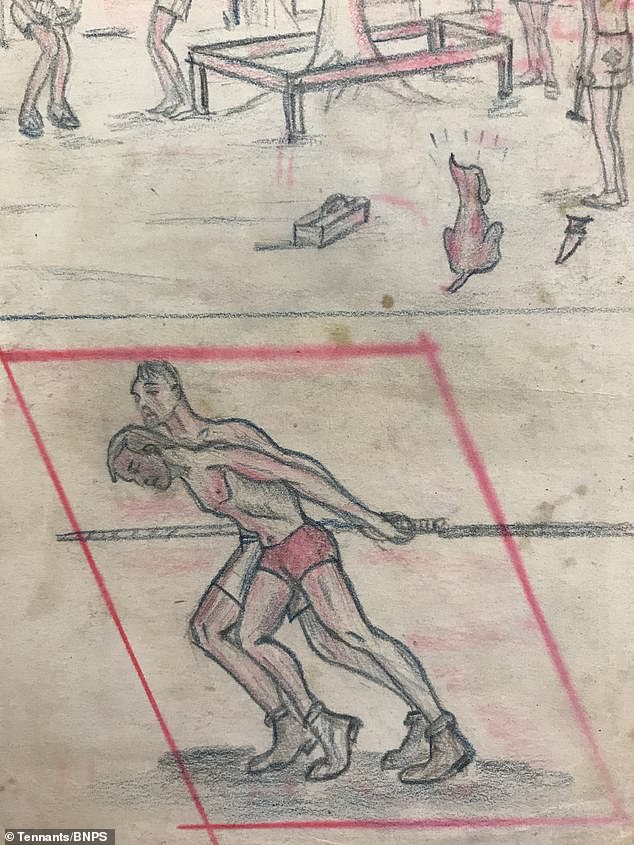 ‘The fact that these men were able to make these drawings and hide them from their guards and for them to have survived in such good condition is very significant.

‘The archive was left to Harry and Edna’s son John who left them to a lifetime friend who nursed him through cancer until he passed away.

‘She has had them in a suitcase under a bed for many years. She just thinks that if anything happened to her they might get thrown away.

‘The journal is really very moving. Harry is writing to his wife but really he is speaking to himself, telling her what was happening and remembering things like them walking down a country lane together.’ 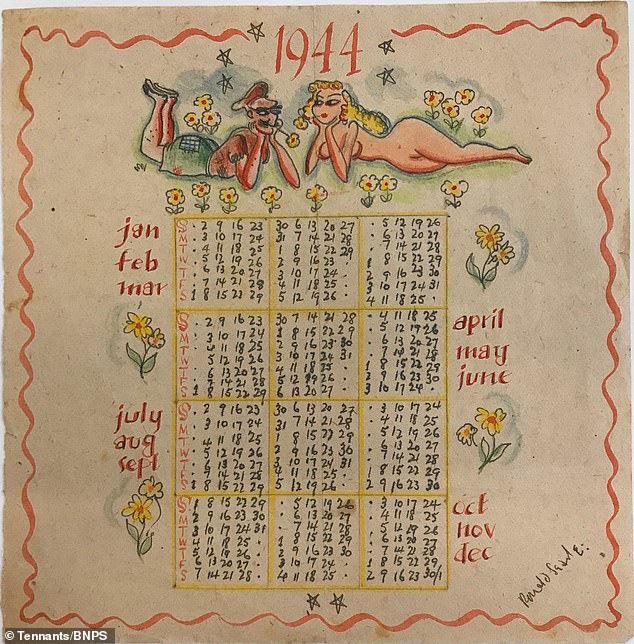 Included in the archive is a calendar which Searle created for his friend. It depicted an image of an army officer lying besides a naked blonde woman 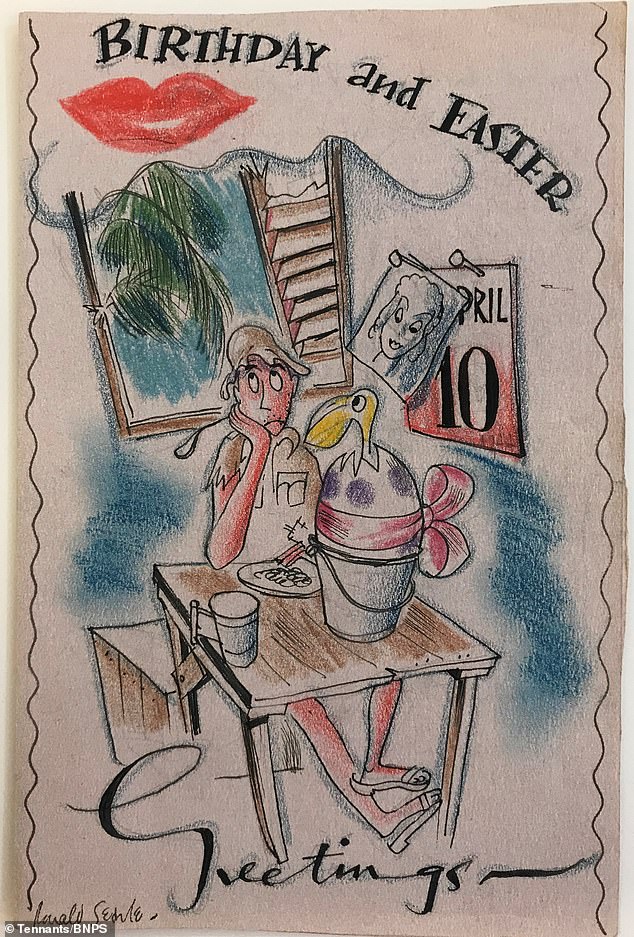 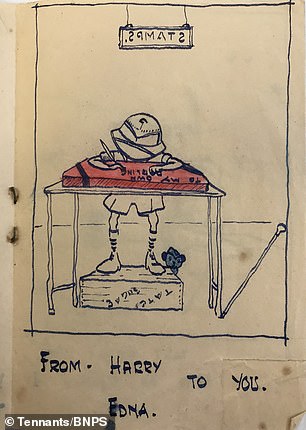 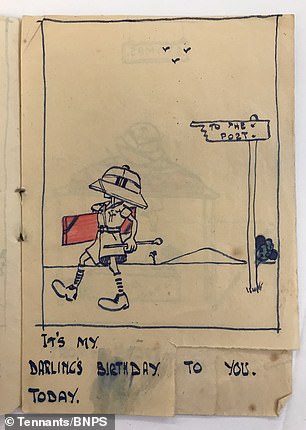 Harry Witheford survived the war and after a spell working in Kenya in the 1950s he and his family settled in North Yorkshire. He passed away in 2008.

The archive, which also contains Captain Witheford’s medals, is being sold on June 30.

Searle died aged 91 in 2012. He later spoke of his horrific treatment in Changi Prison. By the time he was liberated in 1945, he weighed 7stone and his legs were swollen as a result of vitamin deficiency.

His ankle had also been cut to the bone by a tropical ulcer. He said: I’d had dengue fever and malaria 25 times. I came out a walking skeleton, but I was alive.’ 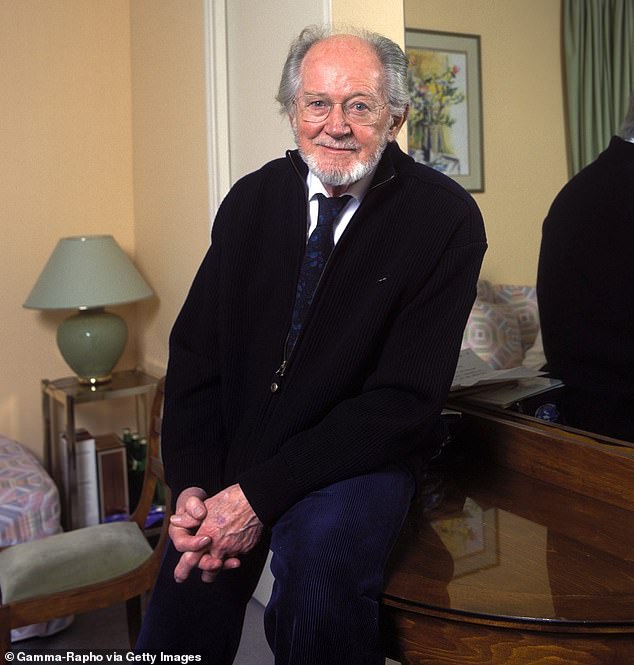 Searle died aged 91 in 2012. He later spoke of his horrific treatment in Changi Prison 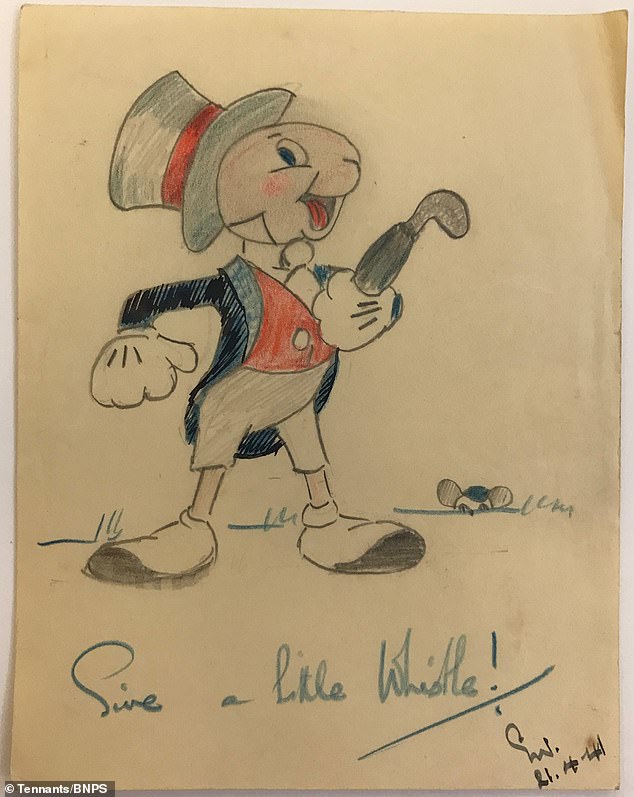 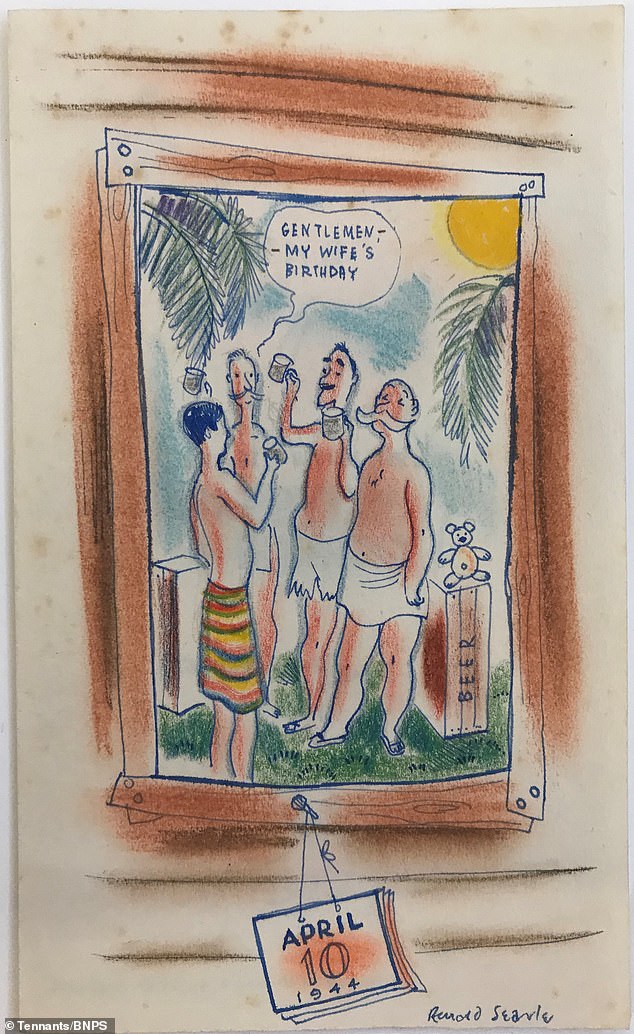 Once home from captivity, Searle went on to create thousands of cartoons, including ones for Punch magazine.

Searle went on to draw a weekly cartoon for French newspaper Le Monde until 2007, a year after he was awarded France’s highest decoration, the Legion d’Honneur. He was awarded a CBE in 2004.

Searle was inspired to create St Trinian’s after – while stationed in Kirkcudbright, Scotland, in 1940 – he met two schoolgirls who had been evacuated from an Edinburgh school called St Trinnean’s. 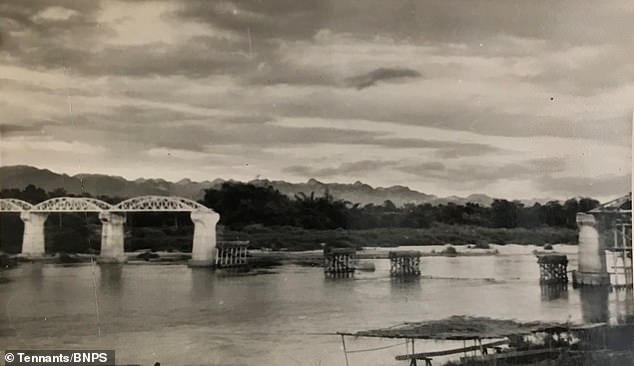 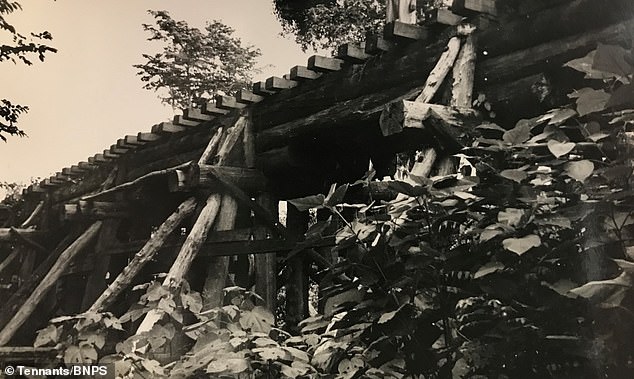 The notorious ‘Death Railway’ along the River Kwai in Burma, as seen in one of the images in Captain Witheford’s collection

The Burma Railway, also called the Death Railway, was built between Ban Pong, Thailand and Thanbyuzayat in Burma, put together with a ready supply of labour in the form of Prisoners-of-War (PoW).

Japan had been cut off from vital war supplies and needed a route into southeast Asia. Taking Malaya was of great help to the war effort but it needed a direct line between Malaya and Burma.

A route was devised between Ban Pong and Thanbyuzayat to join the already available line between Bangkok and Singapore.

Plans for a railway had been shelved in peace time because of the cost.

At least 180,000, possibly many more, forced workers toiled to bring the line together. They were made up of Allied PoWs and Southeast Asian civilians.

Many died of starvation and from being overworked. Cholera was also rife.

Under a new compensation scheme in 2000, those who suffered received just £76 each.

At the end of the war, 111 Japanese military officials were charged with war crimes in relation to the railway, with 32 receiving the death penalty.