Speaking at a Nato summit in Brussels, the Prime Minister will warn that the Cold War alliance must address the rising threat posed by China, as well as maintaining its traditional focus on Russia.

Ministers have been alarmed by the increasing muscularity of China’s diplomacy, including a clampdown on human rights in Hong Kong.

Downing Street said Mr Johnson will use today’s summit to ‘outline the need for Nato to look beyond the Euro-Atlantic to address challenges further afield, including in the Indo-Pacific’. 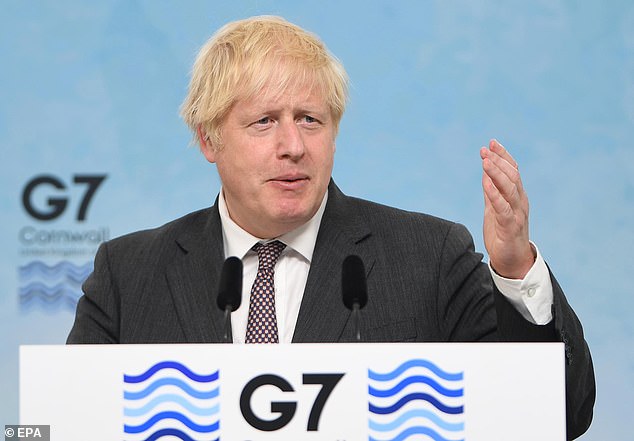 The Prime Minister will warn that the Cold War alliance must address the rising threat posed by China, as well as maintaining its traditional focus on Russia

A source said: ‘The West’s neighbourhood is much bigger than it used to be. If you look at trade, what happens in the Indo-Pacific in terms of disruption has direct effects here. Nato has to evolve to address that.’

Mr Johnson said: ‘Nato is not just important to the UK’s security, it is our security. Nato owes it to the billion people we keep safe every day to continually adapt and evolve to meet new challenges.’

US President Joe Biden is expected to restate US support for Nato following years in which Donald Trump threatened to pull out.

Mr Johnson will also urge Nato allies to step up investment in cyber warfare following a pandemic in which hostile states have carried out attacks on Western health systems and attempted to steal vaccine research.

Allies will hold initial discussions about who should succeed Jens Stoltenberg as secretary-general next year.

Theresa May and former cabinet secretary Lord Sedwill have both been mentioned as potential candidates.

But David Cameron’s bid has been badly damaged by his involvement in the Greensill lobbying scandal.

Allies are also expected to discuss the timetable for the withdrawal of troops from Afghanistan following 20 years of conflict.